Spending the End of the World on OK Cupid 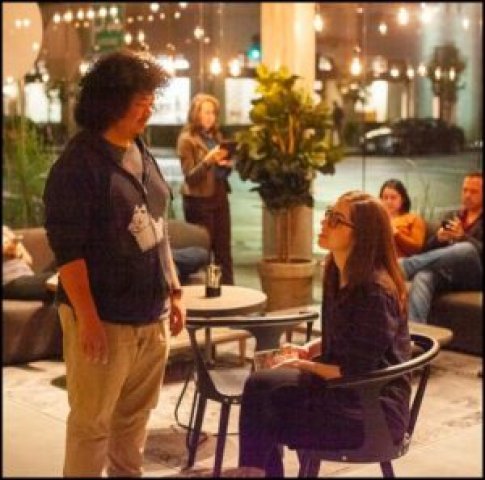 For anyone who has been diagnosed with a fatal disease, the period leading to death can be painful and profound. If one can carry out normal activities under the sentence of death, the person often makes a conscious decision whether to live as routinely as possible; whether to surround one’s self with what is most cherished; or whether to splurge on very special and perhaps extravagant experiences.

In any case, philosophical reflection is inevitable. But what if one knows that life will end for all of humanity at a prescribed time? Say, an asteroid large enough to obliterate life hurtles inexorably toward earth.

In Jeffrey Lo’s new comic farce, Spending the End of the World on OK Cupid, a prophet of doom named Alfred Winters had accurately predicted “The Vanishing” in which half of humanity recently disappeared at once without a trace. Now Winters has assured those who have survived that the world will end at midnight on the day that the action of the play takes place. By the way, for those like me who have trouble deciphering the title, you probably don’t know that “OK Cupid” is an online dating site. Now it should make sense.

The narrative centers on two couples and several other characters whose lives intersect. Each couple has just met on the fateful day through OK Cupid, which should suggest that the characters are not exactly Homecoming King and Queen material. These young adults, as couples and with others, go through relationship rituals and the memes of daily life – from hypnotically gazing into cell phones to confronting the condescending barista at the coffee shop over a $20 cuppa.

Although some aspects of the play are universal, many themes and characters will speak more effectively to a younger audience. Millennials (and stoners?) may find the comedy-club and sketch-type humor funny throughout, but much of it seems strained, even though the actors animate the dialogue as well as can be expected. Humor in the script needs to be fine-tuned, and strands need to be tightened, as some of the segments never connect well with the overall arc. In fact, the funniest segment, a Scotsman, played by Flip Hofman, who reveals his OK Cupid self-summary and six things he can’t live without, fails to integrate at all.

Tasi Alabastro as the hyperkinetic Ben and Michelle Skinner as the depressive Caitlyn bring energy to the lead roles and are effective overall, while Keith Larson seems at risk of blowing out his carotid artery from his frenzied depiction of Winters. At the other extreme, Michael Weiland seems totally natural as the relaxed Bong, and in a small bit, Tyler Pardini nails it as the low affect open-mic, poetry emcee.

The staging suits the vignette-driven nature of the story. Open staircases, platforms, and catwalks comprise Paulo Deleal’s set, with the occasional addition of cafe tables and chairs. Director Michael Champlin aptly isolates scenes on the stage, and actors who are not performing can comfortably hang out in other locations (and fiddle on their cell phones!). Megan Souther’s lighting complements the overall effect. Generally, low lighting is supported by spots and mobile area highlights. Cell phones are particularly effective for facial illumination.

The driving motives of the play are strong. Although the situations are intimate and farcical, existential matters are broached. What is the point of life and why do things remain important to us once we know the end is imminent? Yet, in the notable words of Caitlyn, “Before we learn to die, should we learn to live?”

Spending the End of the World on OK Cupid by Jeffrey Lo is produced by Pear Theatre and plays at its stage at 1110 La Avenida, Mountain View, CA through February 17, 2019