At The Wick Theatre In Boca Raton 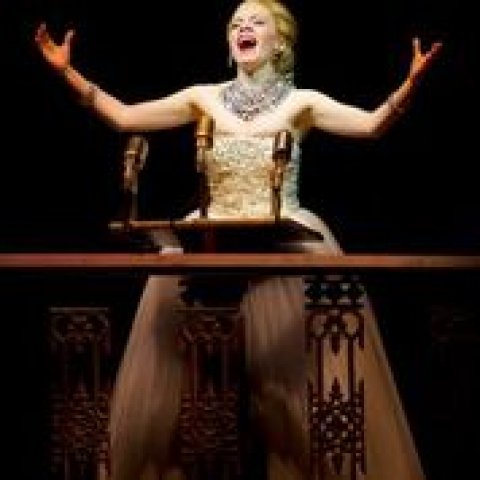 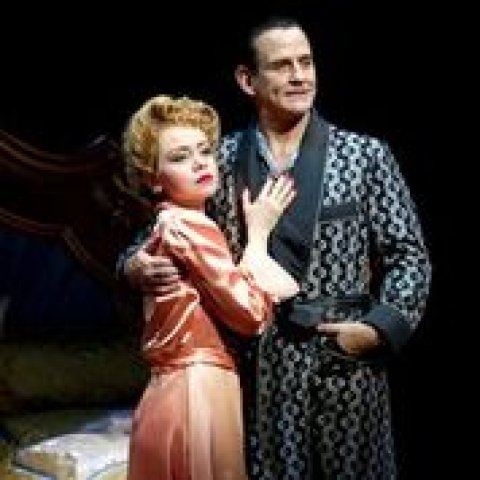 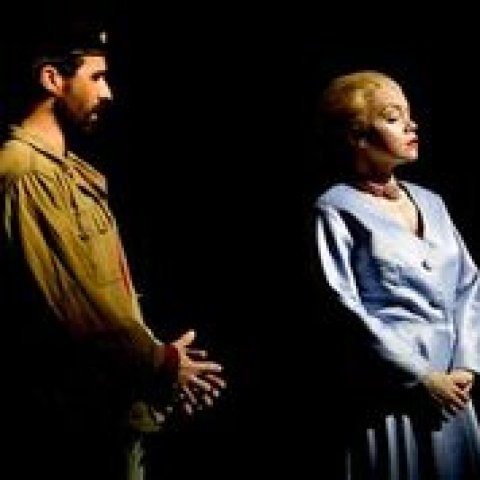 As divided as the United States might be, Americans can agree on this much: People either hate or love President Trump. In fact, some worship him, according to a news report.

Of course, love/hate relationships between citizens and public figures/officials aren't anything new.

Look no further back than the early to mid-20th Century. You might discover a divider in Eva “Evita” Peron. She was Argentine Army General Col. Juan Peron’s second wife. Eva (1919 –1952) united many citizens, particularly the working class. Its members sometimes treated her as a living saint,  deftly illustrated in the prayerful song "Santa Evita." In fact, Eva eventually attained the title of the nation's "Spiritual Leader." However, upper class folks despised her.

Sure, she united people. However, the division she created within Argentina makes Evita, the sung-through, bio-musical about her life, feels particularly timely in today’s divisive America. It's a cautionary tale about, among other things, unchecked power, hypocrisy and two-faced politicians, so relevant in these times.

Therefore, credit The Wick Theatre for recognizing the show’s timeliness and staging a first-rate production. Evita, the first British musical to win the Tony Award for Best Musical, runs through Feb. 23.  Fittingly, the Wick’s interior is elaborate; Eva was an extravagant woman. And the Wick’s production, taking place on Kimberly Wick’s sturdy, two-level, flexible set, deftly conveys this. For instance, costume designer Jim Buff’s character-defining clothes include a gorgeous outfit for Eva. It glistens like a diamond and makes Eva look almost ethereal.

Without a doubt, the Wick has found a jewel to play Eva. She is the Colombian-born, multi-lingual and multi-talented Daniella Mass. Yes, the Daniella Mass who reached the semi-finals on America’s Got Talent in 2015.

As Eva, Mass credibly conveys a mixture of elegance, charisma, arrogance and ruthless confidence. She stands tall, tilts her head back and briskly walks with fearlessness and self-confidence. Meanwhile, her voice betrays conviction, defiance, and touch of sly seduction.

Mass is hardly a towering figure. Yet, you might compare her Mama Rose-like Eva to a rapidly-moving bulldozer. One senses that if anything or anybody stood in her way, she’d crush them without a second’s pause. Such characteristics serve the character well in “Rainbow High.” Eva, with her mighty vocal power, sings the forceful number before the character’s “Rainbow Tour” of Europe. During this whirlwind tour, she met with dignitaries and heads of state. In the song, Eva demands that her fashion consultants dress and make her up to look her best.

But looks can fool. Eva was an actress during her rise to power as Argentina's most powerful female. And this shrewd woman knew the value of performing on the political “stage,” which she does in "Don't Cry for Me Argentina." Mass nails the ballad. Her seemingly sincere, sympathetic, emotional exterior (her voice credibly cracks during the song and she cries while hugging her husband) belies Eva’s tendency to use others for her and her husband’s gain.

The number starts off like a quiet plea. It builds in intensity, until it reaches operatic-like force. At that time, an actress playing Eva must belt the lyrics, while maintaining vocal control and not appearing to yell.

Mass proves up to the task. She endows Eva with a youthful, restless and unapologetically ambitious demeanor during a flashback to her teen years. During that time, Eva sleeps with and then tosses aside various men like a hurricane blowing away a toy boat.

Mass and her fellow cast members also spiritedly perform dances under Stephen Casey’s vibrant choreography. The dances convey the kind of self-assuredness that Eva exhibits up until her sickness starts to overtake her (she died young of cancer). During this time in the production, Eva’s vibrancy and self-confidence is gone. She moves slowly and doesn’t stand as tall. Moreover, Mass' Eva exudes vulnerability, during “You Must Love Me.” Eva sings this subdued song of uncertainty to tell her husband, Col. and Argentine president Juan Peron (a terrific Sean McDermott), that she’s afraid to communicate feelings within her. Why? She’s “frightened you’ll slip away,” she sings to her husband.

Suddenly Eva starts to realize that fame, glory, riches and power cannot stop the inevitable. One of Evita’s messages is that in the end, death equalizes all. Rich and poor, kings and commoners, political giants and the “ordinary” masses, all are equal at the end of life.

Yet, humans have a tendency to idolize celebrities. This is the case whether they are athletes, authors, politicians or actors.

In fact, some names have become verbs, based on a person's perceived or real characteristics. For example, in “Rainbow High,” lyricist Tim Rice’s vivid lyrics include phrases such as “I'm their savior, that's what they call me, So Lauren Bacall me.”

We also learn that, in addition to her narcissism, Eva is hypocritical. For instance, in "Don’t Cry for Me Argentina,” Eva sings that she “never invited” fame and fortune into her life. Shortly after, she has the nerve to sing that “I came from the people, they need to adore me/So Christian Dior me, from my head to my toes.”

Eva also starts a charitable foundation, supposedly to benefit the poor. Then, she loots the dough.

But if Rice and Lloyd Webber seem to glorify the Perons, they present another point of view through the character of Che. He is the show’s narrator, an everyman opposed to the Perons. He speaks for the people of Argentina and sardonically comments on Eva’s hypocrisy and other faults.

Michael Focas plays Che in the Wick’s production (Antonio Banderas portrayed him in the 1996 film adaptation.) Focas endows Che with more subtlety and playfulness than Banderas.  Focas’ Che overtly mocks Eva at times and expresses his anger and disgust with force. However, the strong, rich-voiced Focas also injects nuance into his portrayal. This results in more understated but just as biting irony and sarcasm.

Before Che “waltzes” out of Eva’s life, the two engage in a waltz. It amounts to an argument in which Che criticizes Eva’s actions while she defends them. Fittingly, during their literal waltz, one of them aggressively moves forward, backing the other up. One is the aggressor, demanding answers. Meanwhile, the other is left defensive, basically backing into a corner.  Focas and Mass strongly express their characters' viewpoints.

The equally strong and expressive-voiced McDermott, a Broadway veteran, convincingly plays Juan Peron. He portrays him with an understated, calm, yet keenly felt pride and self-assurance. McDermott also makes us sense a quiet intensity about Peron. His rise to power, for which he and other military figures compete, is metaphorically illustrated in "The Art of the Possible."

Director Norb Joerder, through his staging, highlights the different groups of people in the musical. And the actors playing them make sure to differentiate these characters. For instance, the performers playing the upper class folks walk stiffly, with their heads and backs upward. Meanwhile, military figures march in a robotic-like fashion, with their backs and heads straight. This conveys discipline and respect.

By contrast, the poor folks radiate rowdiness, particularly in the beginning. Also, they easily fall into a trance-like state as they repeat their pro-Eva chant. They’re practically in a frenzy when the intensity reaches its peak.

Each of these groups’ feelings toward Eva range from worship to disdain. And the actors express their emotions through song with credible-sounding conviction.

Lloyd Webber’s glorious melodies, even with an irritating tendency to repeat themselves throughout the course of a show, are memorable and hummable. Further, the songs, some featuring a Latin flavor and others of the rock/pop variety, convey a scene’s mood and amplify a character's emotions. The strong-voiced, expressive actors do not have a live orchestra to accompany them. I'm told that is due to a lack of space on the stage. Even so, the recorded music carries a rich sound and doesn't drown out the performers.

Eva may have divided people. And chances are, modern audience members each probably feel differently about this controversial, complex figure.

But it’s a good bet that many Wick audiences agree that Mass, her cast-mates and the technical crew shine throughout this laudable production.