Viktor Ullmann’s The Emperor of Atlantis or Death Quits 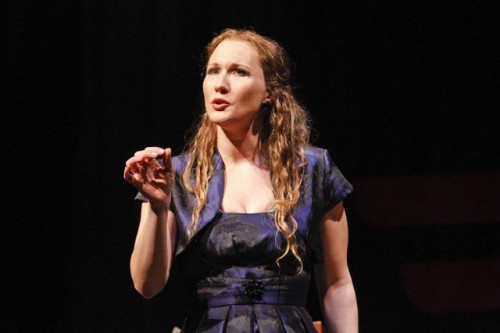 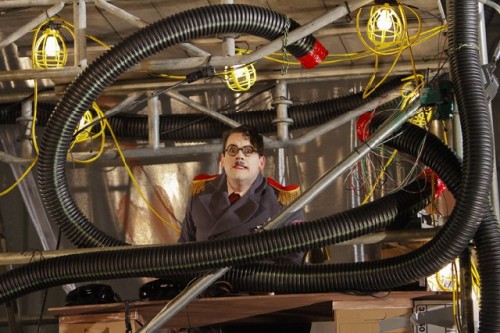 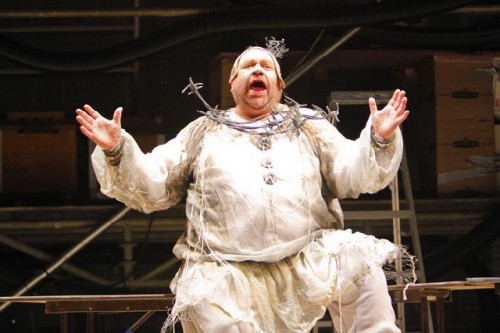 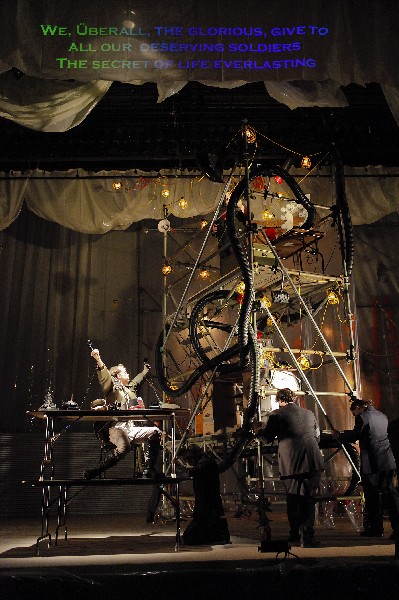 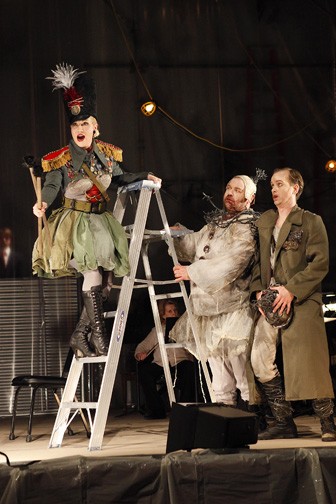 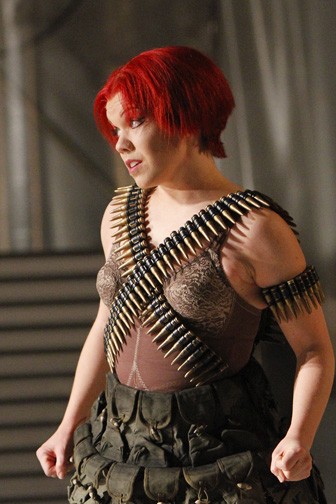 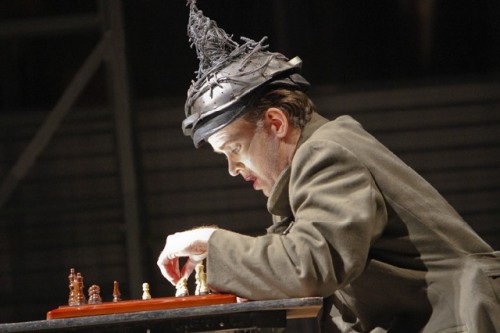 Viktor Ullmann’s “The Emperor of Atlantis or Death Quits”
Boston Lyric Opera
Tuesday, February 1
The Calderwood Pavilion at the Boston Center for the Arts

What can you say about an opera created in a concentration camp by two young men who were killed at Auschwitz instead of being able to rehearse their new work?

Well, as put on by Boston Lyric Opera, you can say that it is a wry, mordant, bitterly humorous contribution to the theater of the absurd. (Indeed, what could be more absurd than writing an opera in a concentration camp?) And, against all odds, it is deeply humane and absurdly hopeful. We who are about to die, serenade you.

The camp, Terezin or Theresienstadt, was a Potemkin Village the Third Reich created in Czechoslovakia to show international groups like the Red Cross that it was not treating its Jews badly, just segregating them from the Aryan population. The Nazis created a propaganda film about it, “Hitler Gives the Jews a City,” that is chilling in retrospect viewing. Privileged and talented Jews spent time in Terezin before they were shipped east to a harsher fate. The arts flourished at a feverish pitch as poets, painters and musicians realized that this was their final act. Ullmann, a 45-year old composer who was conversant with the Germanic music tradition as well as contemporary composers such as Arnold Schoenberg, Alban Berg and Kurt Weill, wrote, “Theresienstadt has served to enhance, not impede, my musical activities…. Our endeavor with respect to the Arts was commensurate with our will to live.”

The story, by the 24-year old poet Petr (cq) Kien, is an anti-war allegory. Death, worn out from all the lives he has had to cut short in previous wars, decides to quit. “They had such wars then. People dressed in such finery to pay me homage,” he sings. The Emperor, engaged in all-out war against everyone, is flabbergasted, “How will I rule if no one fears me?” he asks. Death agrees to come out of retirement if the Emperor agrees to be the first one to die. When he does, a chorus sings a twisted version of the Lutheran hymn, “A Mighty Fortress is our God.”

The allegory can be interpreted as a grand wish fulfillment: the Emperor, obviously based on Hitler, dies, and Peace is proclaimed across the land. One wonders if advance knowledge of the nature of work by the camp commandant hastened Ullmann’s and Kien’s deportation to their deaths.

Ullmann’s music is wonderfully diverse. Echoes of Weill and Berg mix with dance music - the foxtrot, polka, tango and peasant dances - and the music of military bands. Amid the most astringent passages, a lovely lyrical episode will open. The Soldier Girl sings a wistful song, “Is it true that there are still landscapes that aren’t bleak and barren? Is it true that there are still words that aren’t harsh and brutal?” Steven Lipsitt conducted the small orchestra, which shared the stage with the singers, as if the music were in his blood.

The production is just about perfect. Stage director David Schweizer, set designer Caleb Wertenbaker, costume designer Nancy Leary, lighting designer Christopher Akerlind and sound designer David Remedios collectively created a vibrant stage picture with nonstop action. Appropriately, the aesthetic is arte povera. Just as the orchestra is limited to the instruments available at Terezin, the sets and costumes seem to be limited to what might have been available there as well. The general effect makes you think of Brecht’s “Mother Courage and her Children.”

The set is dominated by a three-story metal scaffolding festooned by industrial lights and a snaking corrugated plastic tube. The Emperor’s lair, where he is connected to the rest of the world by telephone, the construction is moved around by the cast. The costumes are brilliantly inventive. Although the work might remind you of Charlie Chaplin’s “the Great Dictator,” Leary gives the Emperor round-rimmed glasses that suggest another silent film era great, Harold Lloyd. Death and his sometime sidekick the Harlequin are attired in the best rag-bag picks, both wearing finial like metal hats. Prefiguring things to come, they evoke Beckett’s two tramps in “Waiting for Godot.”

The cast also is just about perfect. Death, sung by Kevin Burdette, is perfect. His flexible bass is as authoritative as you would expect that of the Grim Reaper to be, but he is also convincing in farcical, ruminative and doubt-filled moments. His antic behavior and plastic facial expressions are wonderfully demented. Harlequin, who, like all clowns, helps to keep things in perspective, was wonderfully portrayed and sung by tenor William Mac Master. The spirit of slapstick was alive in his and Burdette’s interactions. Baritone Andrew Wilkowske’s Emperor admirably dispatched his duties, subtly conveying his consternation as Death refuses his duties, but he was no match for the groundlings, who stole the show. As the Drummer, mezzo Jamie van Eyck, who looked like a cheerleader without a team to root for, was fine, as were Julius Ahn and Kathryn Skemp as, respectively, a soldier and a soldier girl.

The big disappointment of the evening was “The After-Image” a 20-minute opener by local composer Richard Beaudoin, which was commissioned by BLO to make the hour-long “Emperor” a full evening’s entertainment. Beaudoin made two fatal errors. The first was his choice of theme: the difficulty of retrieving the past through photography. The second was his choice of musical language: the dreary middlebrow quasi-lyricism that dominates American opera theater today. Neither had any relevance to Ullmann’s profoundly moving and entertaining work. It is always a risk to commission a new work, but BLO lost out in this case. It would have been better for the company to have presented “The Emperor” by itself.

Boston Lyric Opera’s next production is Handel’s “Agrippina,” which opens March 11 at the Shubert Theater.