This, Too Long Left Unsaid 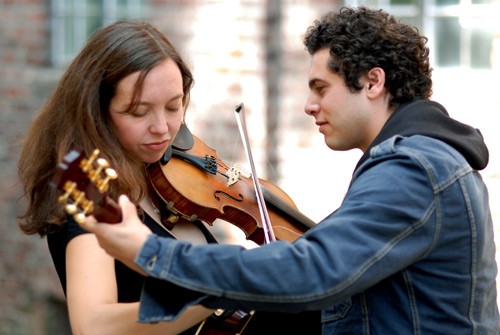 Mike and Ruthie, I saw them at Eagle Hill, but you may be able to catch them at Passim in March. 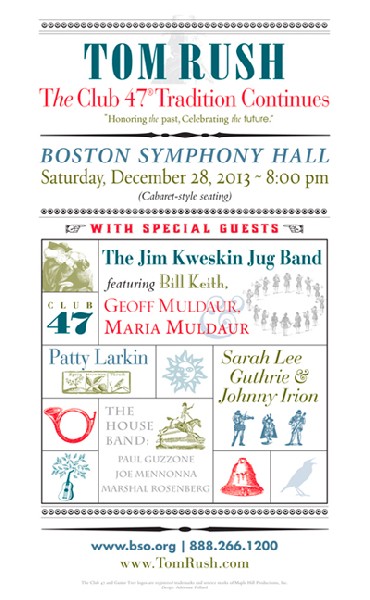 The poster for the 2013 year's end Tom Rush extravaganza. 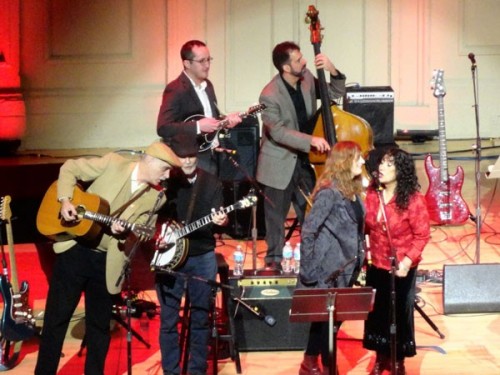 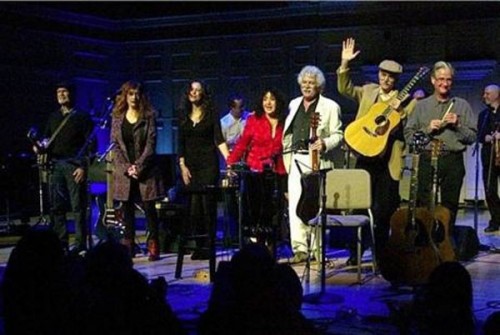 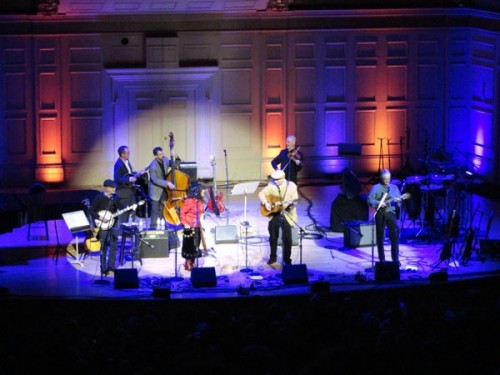 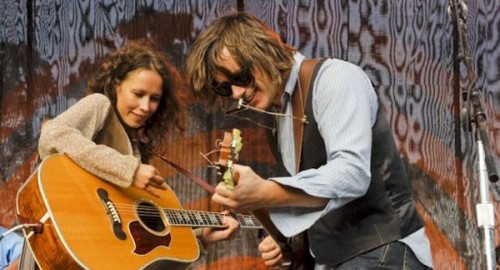 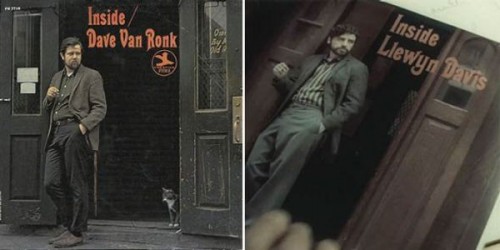 An original Van Ronk LP cover and the supposed cover of a Llewyn Davis album. I wonder if the cat in the original inspired the whole cat sthick in the film. 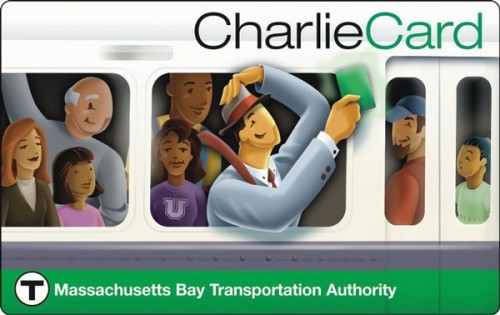 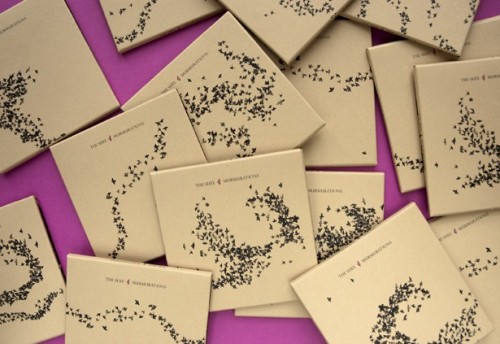 Lillias Kinsman-Blake designed the cover so that every individual jacket is different and you too can have a one of a kind. BTW, shjifting swallow swarms are called Murmurations 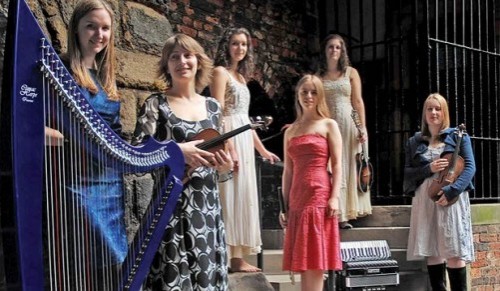 The members of The Shee.

2013 got a bit complicated at its end and I find myself struggling to catch up with writing of those events, sorting out the ones on which I want to comment and deciding which deserve sharing. As getting about becomes more taxing, I have decided to restrict the live events I will cover to be those nearby, and if more distant, only those of considerable significance.

Two events in the last few weeks of 2013 met that criteria.

A November concert by Mike and Ruthy at the Eagle Hill Cultural Center in Hardwick provided me with a wonderful surprise. I was delighted not only by their artistry and the charming intimacy with which they relate to their audience, but with a realization that there are still performers who understand the core principles of mountain (Southern Appalachian root) music, and can create contemporary songs that fit comfortably into that framework. For those of you survivors of the ‘60s or retro-young-uns, think Hazel Dickens and Alice Gerrard, Jean Ritchie, Michael Hurley and The Holy Modal Rounders.

They sing with clear simple voices, a sincerity of tone and straightforward sentiment. Their accompaniment is measured yet sophisticated without flash or pretension. While Ruthy writes most of their original material, they draw from the writings of others as diverse as Woody Guthrie, Len Chandler, Tom Waits and Bob Dylan.

They will perform at Passim in Harvard Square this coming March, and Williamstown in July. I urge you to catch them live if you can.

Meanwhile EHCC continues to offer exciting and original artistic programming under the direction of Paul Overton. Check out their schedule.

Tom Rush’s December Symphony Hall concerts were a lapsed tradition for awhile. The last time I had attended was, if I recollect, in the ‘80s and Bob Lurtsema was still MC-ing. I think Jackie Washington, (now Jack Landron) appeared and maybe a version of the Charles River Valley Boys.

Now reestablished and given that I was not off to the southwest until after the New Year I was eager to attend, not only to hear Tom, but what might have been the final reunion performance of the Jim Kweskin Jug Band with Maria Muldaur and Bill Keith. Add Arlo’s daughter, Sarah Lee with her husband Johnny Irion to the presence of Patty Larkin and you have a stage full of first rate performers.

It was a magical night, not just because the music was wonderful, but because it really encapsulated and brought back in superb fidelity, a validation of our memories of how informal and intimate and honest the performances were back when. This was reinforced because every artist got a chance for their moment in the spotlight, and also participated in pairs and multiples with every other artist on the stage. There were comings and goings and no discernible blunders and one charming surprise after another. The jug band was, if not as tight, every-bit as together as ever they were and the gestalt was as artistically satisfying as I have ever heard them. The solos by Jim, Geoff, Maria, Bill Keith reminded us of how competent each of them were as individual artists before they had ever teamed up. We missed the insouciance of course but hardly forgotten were Fritz Richmond and Mel Lyman. Matt Glaser, Joe Walsh and David Landoni filled in for them with enthusiasm and technical brilliance.

Patty Larkin had her fans enthralled and clearly Sarah Lee and Johnny added droves to their fan base.

Tom opened the evening and with short set closed it save for a grand finale with everybody back on stage.

It was an evening of warm memories, and if I had ever had a suspicion that I had over romanticized the artistry that had blossomed in that fragment of a decade, roughly called the ‘60s, all doubts were swept away.

Kudos are due to producers Rob Stegman and Todd Kwait in this, their maiden voyage into concert production.

As I mentioned at the top, for my wife and I, attending this event required some effort. Two hours of driving to the city fringes, figuring out how to access the MTA from Riverside and remembering how to cross over to the Symphony Hall connection, and reversing it all at the end was challenging. I cannot immediately think of any other combination of artists I might have been willing to dedicate that much effort to, and I will feel ever grateful that we felt not one whit regretful that we had done so.

The experience underlines for me the extent of revisionist history that is even now occurring in art, journalism and opinion. With close to a dozen new films and manuscripts appearing over the last several months, our appetites for nostalgia were well whetted and our teeth were set on edge by at least one major effort.

I have not seen Inside Llewyn Davis, nor have I yet to make up my mind whether or not I will. According to many reputable critics it is a fine film and of artistic value. According to many reputable persons upon whom the characters are based and many who were intimate with said characters, the overall perspective contrived by the director(s) is incongruous to say the least.

Here on BFA, Charlie Giuliano in a detailed review of the film, had modest praise for it but noted that “Folkies will recognize how Ramblin' Jack Elliott becomes Al Cody (Adam Driver), the Clancy Brothers and Tommy Makem become unnamed Irish singers. Davis is modeled on Dave Van Ronk whose posthumous memoir was an inspiration for the film.”

And a bit later,:

“Mostly musicians at the clubs, other than headliners, got their share of passing the hat. That meant that Davis was chronically broke looking to crash on couches. Since that’s for a night or two he thumbs through a well worn address and phone book. He has a surly pattern of burning bridges.”

“Jean (Carey Mulligan) an aspiring singer and twist of his best friend Jim (Justin Timberlake) is pissed off and won’t let him in. She has good reasons. It seems he has been shagging her behind Jim’s back and now she’s preggers. He doesn’t have the scratch to pay for an abortion. Reluctantly she gives him the floor while a folkie soldier (Tom Paxton?) passing through gets the couch.”

Those of us who knew these characters and their tramping grounds and the artistic milieu through which they paraded would not, had we not been prepped that all was based on Dave Van Ronk’s autobiography and had not the producers’ liberally salted the scenes and promotional materials with “clues” have likely recognized either the characters or the ambiance of the brothers Coen’s vision. Van Ronk, like the protagonist, had a caustic tongue, but unlike Davis, he also had a warm heart, a generous nature, an artistic sensibility that endures today in his body of work and in the work of the many he influenced. In no way was he artistically a failure. Finally, he had an attitude that shouted, “we are all in this together so let’s make it work for all of us while we have the chance.”

None of what I have gathered from any of the reviews I have read indicates any resonance with the reality that I and most of my colleagues knew.

If art is truth, and I concede that it may be that the truth expressed in this film transcends the reality we knew and remember, I cannot argue with the choices the directors made to tell their story, but neither can I help but wince at the payment exacted from our desires to have a memorial to our sense of time, place and personalities all of which provided the foundation for much of our political, cultural and artistic framework.

I think Edward Helmores’ commentary on the UK’s Guardian website sums it up as well as any could.

“In their defence, the film-makers have said the Llewyn Davis, played by Oscar Isaac, is not Van Ronk." But Oliver-Goodwin doesn't buy that. "There's so much about him that it's hard to separate them. He sings Van Ronk songs, he looks like him, he works at The Gas Light, he has one record out with Moe Asch at Folkways Records. The scene in the film when he goes to his record company to complain about not having a coat is a Van Ronk story. So it's annoying."

For additional considerations on the same theme, here are some links with cogent points.

A Conversation with Terri Thal, wife and manager of Van Ronk in the '60s.

Revisionism is not however restrained to the cinema, and if you have a taste for such revelations I heartily recommend a wonderful article, detailing the evolution of one of our most popular folk songs of the last 60 years. It is lengthy, but rewarding, comprehensive and more important, germane.

Remembering Charlie on the MTA.

Finally and as a reward for those with the stamina to get this far, let me tell you about an Album I put high on my list of 2013 favorites and which I would be surprised to find has been heard by any of you.

While not unheard of here, there is a greater convention among UK traditional performers, individuals, duos and trios, etc. to band together with peers to form ongoing super-groups while continuing their individual careers at the same time. The Shee is such an ensemble.

I do not know whether these ladies have taken their name to reflect their sole gender, or as a nod to the Sidhe, also pronounced Shee, Celtic faeries of magic, power and mystery as well as great mischief. If they have done the latter, it would be no surprise as mischief aside, their music has much indeed of magic, power and mystery in its structure and in its dynamics.

The program alternates vocals and instrumentals beginning with a musically slow to develop rendition of the traditional and dark Down In The Broom. Olivia provides the lead vocal joined at the end by Rachel and Laura-Beth for a stunning bit of vocal harmony. Rachel takes the vocal lead on the second traditional piece, a Childe Ballad, The Three Knights and also as well on the closer, An Till Mise Chaoidh, with a delicate, yet never fragile, mood evoking performance that can raise goosebumps, especially when Olivia and Laura-Beth provide contrast and reinforcement with their well timed harmonies.

Three more contemporary vocal performances are included, Sugarwine being a great change of pace and mood.

Interspersed between these are instrumental compositions, medleys and dance tunes, yet every one has a different sound, a different mood, a melodic twist that always surprises and delights. I am hard put to describe some of the flourishes that make this production one of the most creative and highly refined pieces of contemporary traditional, (not the contradiction you might think it is), that I have yet to hear.