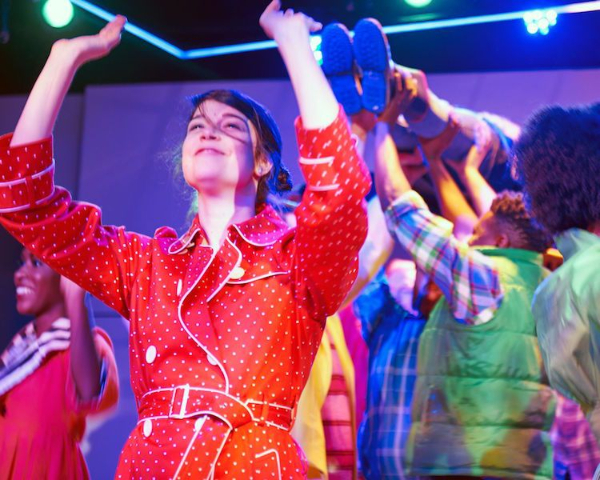 Sarah Price as Jasmine during “I Am Not a Robot.” Photo by Lee Miller.

Three sisters. Estranged from their climate scientist father. Their lives each upended by climate change. And dozens of other characters. Steep Theatre’s U.S. premiere of Earthquakes in London spans eras from 1968 to 2525 and is performed by a cast of 15 directed by Jonathan Berry, one of Chicago’s most talented directors.

Mike Bartlett’s Earthquakes in London is a loopy meditation on climate change, its risks and destiny. The play is performed in a chaotic way, scenes piling upon scenes, couples interrupting and exiting, music and videos starting and stopping. In the beginning, the technophobe song from 1969, “In the Year 2525” plays off and on and the play ends with a scene, possibly a dream, set in 2525.

Here’s an example. In the first 15-20 minutes of Earthquakes, this happens.

Freya (Lucy Carapetyan), the middle sister, is pregnant. She’s making coffee and singing “2525” while her husband Steve (Nick Horst) is in the shower. Into a parallel scene comes her younger sister Jasmine (Sarah Price), followed by Tom (Greg Geffrard) who as an offer of friendship bought her coffee as he remembers she likes it, even though they’ve never met. Jasmine dropped out of school because she and her lecturer disagreed on Charles Dickens. (His eye was injured when she threw a copy of Bleak House at him.) Meanwhile Freya is nervous about the pregnancy, worried about an earthquake, and wishes Steve wasn’t leaving for three days. Oldest sister Sarah (Cindy Marker) is the environment minister. She’s in her office with her assistant Simon (Omer Abbas Salem) and then meets with Carter (Peter Moore) an opponent of her plan to halt expansion at Heathrow airport, which she’ll soon present to the PM. Sarah’s husband Colin (Alex Gillmor) tries to buy a guava at a food shop. At a nightclub, Jasmine dances a strip tease with “Save the Rainforest” signs to Nick Cave’s “There She Goes My Beautiful World.”

Steve is worried about Freya and goes to visit the sisters’ father, Robert (Jim Poole), a renowned and fatalistic climate scientist. He opposes having children and advised Freya not to have any.

Scenes set in the 1960s and 1970s present early warnings about environmental change and introduce Robert as a young scientist (Nate Faust) who accepts an airline company’s payments to write a favorable report on climate damage from airline fuel use.

And so it goes, until near the end when Freya wakes up in a hospital in the year 2525.

There are many charming and funny interludes throughout this three-hour production. (The first act is very long—almost two hours—followed by an intermission and the second act.)

In one scene, five men wearing varied striped swim trunks play ukuleles on the beach while Freya sings along.

In Covent Garden, tourists, street performers, commuters and passersby, all dressed in brightly colored coats, sing “I Am Not a Robot,” while lifting Freya up. There’s a marching band, people in animal suits and a robot with a silver box head.

Later a polar bear (or a man in a polar bear suit) tries to raise money in the street because his habitat is being destroyed.

These bizarre and sometimes festive interludes add a sly twist to the production. The use of pop music, such as songs noted above, and tracks by Coldplay and Arcade Fire, gives Earthquakes a contemporary charge. Overall, there’s a whimsical and carnival-like atmosphere to this dark story: The degradation of our planet. The play leaves us with a note of hope, but clearly it’s up to us to do something.

Jonathan Berry’s direction is masterful, keeping this tragicomedy on track. (The playwright notes in his script prologue, “Scenes crash into each other, impolitely. They overflow, overlap. The production should always seem at risk of descending into chaos but never actually do so.” Berry’s cast is excellent, particularly Carapetyan, Price and Marker as the three sisters.

The set by Arnel Sancianco is minimal and highly functional. The main props and furniture are six stacking tables that double as seating. Sliding doors at stage rear sometimes open for other scenes. A large projection screen displays videos, film and other visuals, designed by Joseph Burke. Sound design and original music are by Matt Chapman. Alison Siple created the costumes.

Mike Bartlett is author of King Charles III, which was recently staged at Chicago Shakespeare, as well as Cock (Profiles Theatre in 2014). His other plays include Love Love Love, Artefacts and An Intervention plus many works for television and radio. Earthquakes in London premiered at the National Theatre in 2010.