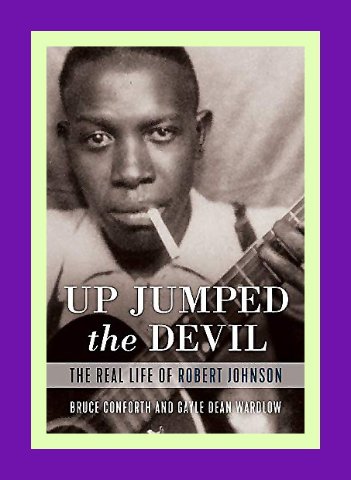 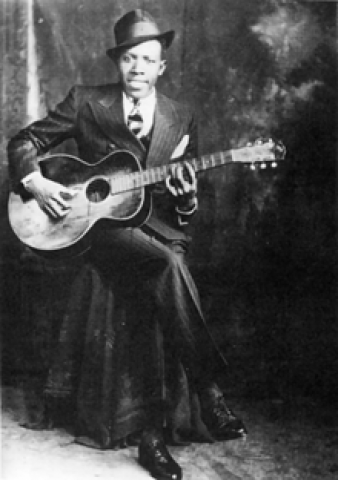 The King of the Delta Blues, Robert Johnson, died in relative obscurity on August 16, 1938. Performing in a juke joint in Greenwood, Mississippi he was given mothball laced hooch three days prior by a jealous husband. He died in agony from internal hemorrhaging.

As a rambling man he wandered far and wide from the delta to New York City and Canada. At times he had a sidekick but mostly traveled light, fast, and solo. He was known for an astonishing range of material from popular tunes to his own compositions. With unique and widely emulated chops he could perform in a range of styles including lead as well as accompaniment.

When British musicians like Keith Richards and Eric Clapton heard Johnson's recordings for the first time they could not believe that he was performing solo.

During his lifetime eleven recordings were released by Vocalion Records. They sold moderately as Race Records and got some airplay. At the time of his death Columbia Records A&R man and producer, John Hammond, was said to be attempting to book him to the famed Spirituals to Swing concerts at Carnegie Hall on 23 December 1938 and 24 December 1939. Hammond produced the last session of Bessie Smith.

With irony Johnson is noted as the ignominious founder of the “Twenty Seven Club.” Other musicians who died at 27 include Jimi Hendrix, Janis Joplin, Jim Morrison, Kurt Cobain and Amy Winehouse.

The legend of Johnson is a delta version of Faust. For devout, rural, church going black people the blues were cursed as “the devil’s music.” Described as a journeyman performer that changed when he got his mojo practicing at night in a graveyard.

It is one of many myths, fantasies and tall tales that have been meticulously researched and debunked by Bruce Conforth and Gayle Dean Wardlow. They have published the absorbing and remarkably detailed book Up Jumped the Devil: The Real Life of Robert Johnson.

Realizing that there was a market for race records, generally sold for a cheaper price, Black Swan, OKeh, Vocalion and other companies combed the south for artists to record. Later folklorist Alan Lomax made many field recordings for the Library of Congress including Muddy Waters Down on Stovall’s Plantation as well as a series with New Orleans pioneer Jelly Roll Morton.

In Jackson, Mississippi, around 1936, Johnson sought out H. C. Speir, who ran a general store and also acted as a talent scout. Speir put Johnson in touch with Ernie Oertle, who, as a salesman for the ARC group of labels, introduced Johnson to Don Law to record his first sessions in San Antonio, Texas. The recording session was held on November 23–25, 1936, in room 414 of the Gunter Hotel. Law's son, Don Law, Jr., booked acts for the Boston Tea Party and became the region's leading rock producer.

The release of records made some tunes familiar to his listeners. His "Terraplane Blues" was a hit initially selling 5,000 copies.

In 1961 Columbia released King of the Delta Blues Players with Volume Two in 1970. The Complete Recordings a two-disc set, released on August 28, 1990, contains almost everything Johnson recorded, with all 29 recordings, and 12 alternate takes.

The impact of the release of this material, particularly on British rock, was palpable. Cream had a 1966 hit with “Crossroads.” The Stones included “Love in Vain” in their 1969 album Let it Bleed. When Muddy Waters went electric in Chicago he adapted and recorded the material of Johnson. That’s what British musicians were listening to and performing with John Mayall, Jimmy Page, Jeff Beck, Eric Clapton, and the Yardbirds. Many British rock legends started by emulating American blues.

The London Howlin' Wolf Sessions was released in 1971 on Chess Records, and on Rolling Stones Records in Britain. It featured the Chicago Blues master with Eric Clapton, Steve Winwood, Charlie Watts, and Bill Wyman. Chess had a similar project with Chuck Berry.

If you grew up with this music the book by Bruce Conforth and Gayle Dean Wardlow is a page turner. The enormity of the myth of Robert Johnson is fueled by a limited oeuvre, its unprecedented influence, and obscurity of the facts of his life. There are only a few know images including a pr photo of him decked out in a borrowed suit and another from a photo booth smoking a cigarette and strumming the guitar. The authors refer to images they know of but were unable to publish.

The story of Robert Johnson rivets with its brevity and tragedy from cradle to grave.

He was born to Julia Majors and Noah Johnson “on or about May 8, 1911” in Hazlehurst, Mississippi. Julia’s husband, Charles Dodds, had fled to Memphis, possibly to avoid being lynched. She left town with Robert and three other children. In Memphis she left them  with Dodds who had changed his name to “Charles Spencer.” Robert later attempted to find his birth father whose name he took. The authors document that frustrated effort.

In Memphis he may have had a better than average education. It was expected that he would become an indentured share cropper. That might have happened but he started to pick up change moving from town to town. At the age of 17, Johnson had married 14-year-old Virginia Travis. She and their unborn baby died in childbirth the following year. He was away when that happened and there were no attempts to settle down after that. As the blues song states "Whiskey and Women" were readily available to an itinerant entertainer.

In the delta he played in the streets or plantations on Saturday night. Juke joints and barrelhouses were raucous and dangerous. Pine Top Smith, pianist and inventor of boogie woogie, caught a stray bullet during a barroom brawl. Bad luck eventually caught up with Johnson.

The myth that he was an autodidact or made a pact with the devil is debunked. He interacted with and learned from other players as well as recordings by Charlie Patton and Son House. In particular he was mentored by the masterful Ike Zimmerman who, like Buddy Bolden in New Orleans, never recorded. Johnson may have based some of this technique on emulating popular piano players.

A musician let him try an electric guitar. The authors state that he wasn’t impressed because he “couldn’t make it talk.” That is particularly relevant because his solo music influenced electric blues in Chicago and British rock. Given the intimate settings in which he performed there was no need for amplification. There was no way he could hobo around schlepping an amp.

The authors nail biographical details of his itinerant career and few recording sessions. There is also superb critical analysis of his technique and eclectic range of style. Several of his compositions are skillfully deconstructed.

For me this was a slow read as there was much to absorb and evaluate. It makes a compelling case for why he is regarded as King of the Delta Blues Players. Beyond just Clarksville and Yazoo City he is on the short list of most accomplished and influential American musicians of his era.

He was inducted into the Rock and Roll Hall of Fame when it was founded in 1986. In a field of 16 legends of the music, as the precursor of rock, Robert Johnson graduated first in his class.