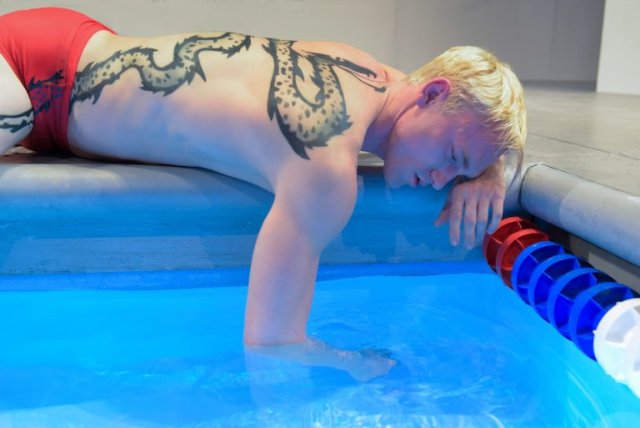 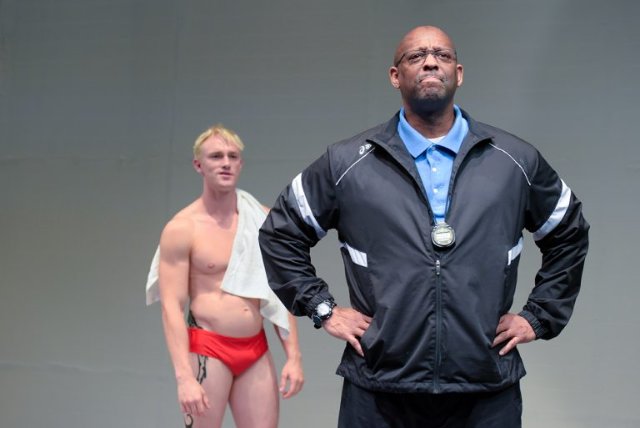 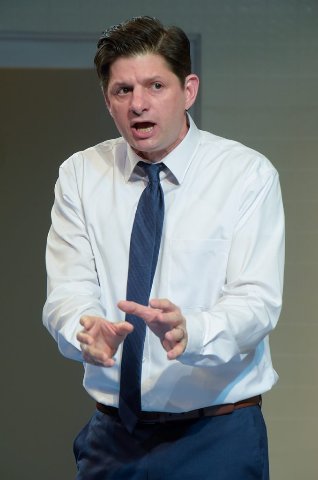 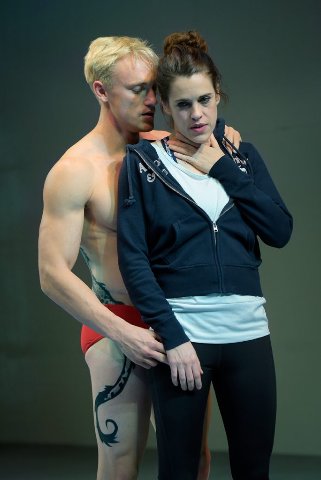 As the curtain rises (figuratively), a man in a business suit patters like a snake oil salesman to another man in an athletic warm up outfit. The attorney, Peter, uses every bit of logic and emotion at his disposal, seeking to persuade Coach to his way of thinking. At the swim club, performance enhancing drugs have been found. Peter’s brother Ray is one Olympic trial away from getting a big endorsement contract from Speedo. Although a different swimmer is implicated, Peter is concerned that any scandal would diminish Ray’s marketability. He also implores Coach to consider that the reputation of the club would be sullied. Coach isn’t having any of Peter’s argument.

Ray has become a world class swimmer, even beating Michael Phelps and Ryan Lochte. Swimming is everything to Ray. He’s not the brightest bulb; hasn’t earned a college degree; and doesn’t have a Plan B. Ray does have modest expectations to have a family and a home of his own, and he does possess some unexpected savvy. For instance, he had a large tattoo of a sea serpent inked from the nape of his neck, across his back, and down his thigh. The result is a unique visual identity when he is racing (except for the back stroke!). Not only will he stand out from the competition, but the sea serpent will become a logo to promote his brand.

Playwright Lucas Hnath has created a compact serio-comic thriller of four devious charactersoften  blurting thoughts in often overlapping dialogue. Each wants to win, and in different ways is prepared to compromise moral or legal rules and use others to get there. So the playwright asks the question: what are athletes and their promoters willing to do in order to win? But refusing to hold to an imperative, his characters raise objections to simple morality. The crafty Ray asks if improper actions are justified to make an unfair playing field fair, while Peter recalls the instructions in airplanes to always secure your own oxygen mask before helping others.

The message extends beyond the boundaries of the pool. Why is it that the public cares so much about who wins sporting contests? Further, why do we adopt individual athletes and teams to identify with and become part of our own psychic measures of personal success and failure? This behavior is particularly curious when so many athletes have moral and social standards very different and even clashing with our own.

The acting in “Red Speedo” is stellar. Max Carpenter plays Ray. He wears only a red Speedo his complete time on stage. Not only is he exposed and vulnerable, but his whole life is wrapped up in that fistful of spandex. Carpenter’s awkward smile reveals Ray’s lack of confidence about life outside the pool. His anxiety over expecting an outcome to one extreme or the other is palpable.

Gabriel Marin is whiny as Peter who wants to get more than he gives. He feels he’s owed a better deal, and Ray is his meal ticket to move from practicing law, which he hates, to representing athletes. Michael Asberry as Coach is a no nonsense, towering, impenetrable wall of a man, almost taunting anyone to try to get by him. With years invested in coaching Ray, he will take whatever measures necessary to keep him from bolting to a more famous, better funded club. Finally, Ray’s ex-girlfriend is Lydia, played by Rosie Hallett, whose portrayal is smartly ambiguous. Hallet makes it unclear whether Lydia really considers herself a victim or a perpetrator, but the character knows that with her previous career gone, she must move on. She and Peter are at odds, and she feels that he is partially responsible for her woes, which has complicated her relationship with Ray as well.

Center Rep has produced a sharply drawn realization of Hnath’s Obie winning play. The story line is riveting, and director Markus Potter’s pace is brisk and assured. One nagging issue in the script is that the several scenes all occur at the swim club’s indoor pool, and mysteriously, our characters have the space all to themselves on every occasion. Scenic designer Dipu Gupta’s space itself is simple but striking. A bright white, painted cement block back wall dominates the stage, and a rudimentary pool fronts it. The small pool, adorned with lane dividers, appears to be a glass covered imitation, but wrongful observation is disabused when the action shockingly results in breaking the surface of the water.