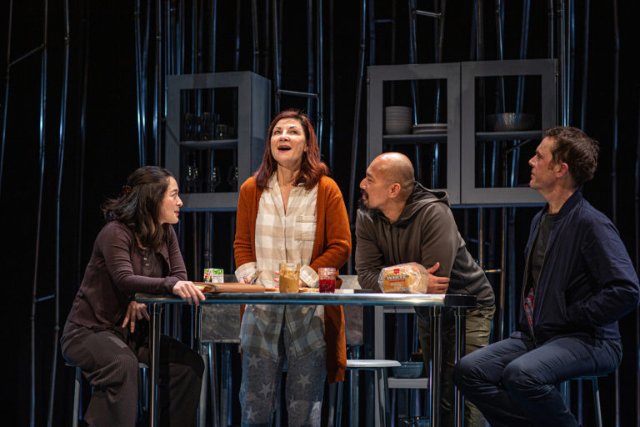 Sure, recitations of letters have been the basis for surprisingly effective theater. Consider Dear Liar, evidencing the long friendship of George Barnard Shaw and Mrs. Patrick Campbell. Or Dear Elizabeth, the enduring relationship between Robert Lowell and Elizabeth Bishop. But these were famed, articulate, literary lions, and their relationships evolve with time.

So, what about a play that recites letters to and from an anonymous, unpaid, Internet blogging advice columnist code-named “Sugar?” You’re kidding. Right? Well, it turns out that poets and playwrights aren’t the only ones who have trenchant insights and who can spin an eloquent phrase.  What’s more, this blogger gives formidable, often earthy counseling at the same time. It also turns out that Sugar, a.k.a. Cheryl Strayed, as we later learn, has accomplishments as a writer, including her memoir Wild.  This book (also a film starring Reese Witherspoon), depicts her courageous 1,100 mile hike on the Pacific Trail to relieve grief, largely from her mother’s early death.

The structure of Tiny Beautiful Things is comprised of unrelated letters requesting counsel, followed by Sugar’s responses, so the incoming letters lack a narrative arc. However, the themes of human dignity, self-worth, redemption, forgiveness, and especially love, course throughout, resulting in emotional connectedness. Sugar encourages her correspondents to adopt these beliefs and actions and bellows of the “power of that puny word love which clangs like an iron bell inside of me.” She also embraces the notion of breaking silence, because change in relationships cannot come without exchange of information.

While the focus of each advice is to resolve the petitioner’s problem, something in Sugar’s counsel differs from the old timey Ann Landers or Abigail Van Buren.  In keeping with this era in which high risk sexual behavior as well as soul and naked-body baring in the most public of venues has become routine, Sugar’s communicants divulge problems that would never have appeared in print media of earlier generations. But she often puts her own experience out there in response, so that her autobiographical sketch becomes a revelation of character development and a central storyline.

Further, she has a story to tell, as those familiar with Wild would know. Her credibility as a healer comes not just from her willingness to open up about herself, but because she has clearly been damaged and has been one of those in need. She lays bare her bad decisions, her demons, her victimization, and her losses. Sugar may not have suffered the particular problem of a writer seeking help, but she has experienced so many tragedies that her empathy is well grounded, sincere, and convincing.

A fine fit for the role, Susi Damilano shines as Sugar, schlumping around in slippers and pajamas, embodying her weariness and compassion and grit and candor and optimism, all with equal grace and authority. And it’s well she does, because Cheryl Strayed was in the audience opening night!

The other three actors, Mark Anderson Philips, Kina Kantor, and Jomar Tagatac are designated as Letter Writer #1, #2, and #3 respectively. Each portrays many different seekers of advice, sometimes representing members of the opposite sex or people of radically different ages than their own. Each displays remarkable versatility and skill. The fidgety and fiery Philips gets perhaps the most humorous material, including a recurring motif that always culminates with a disbelieving “What the fuck!?” He also has the longest and one of the most heartrending stories as a man who is so distraught that he can’t put together written paragraphs and instead composes his rage and sorrow in 22 points.

The advice seekers’ requests concern their pain for everything from going to a new school in eighth grade, to confronting estrangement from one’s parents after transgender sex surgery, to grieving from the tragic loss of a child. Some letters will bring chuckles while others may bring tears. But when it’s over, the audience should feel entertained, emotionally touched, and provoked.

The content of the letters and replies is certainly of interest in its own right, but what makes the script work as theater is that the characters don’t simply stand and deliver. Sugar both interacts with characters and shares space without interacting. The impact is the sense of conversation within a community of humans rather than simply the electronic transmissions that result from composing messages on a keyboard.

In addition, the staging is sensationally striking and meaningful. Jacquelyn Scott’s stunning set incorporates both depth and darkness.  As alternate cocoons, a homey kitchen and seating arrangement front an abstract, connected array of shiny, vertical metal rods that represent both the Internet and synapses signaling between neurons – technology and humanity intertwined. Michael Oesch’s thoughtful lighting often reflects differing colors off of the rods, suggesting various emotions evinced in the letters. The total staging effect excels both visually and symbolically.  The production is brought together by Bill English’s stylish direction.

Tiny Beautiful Things with book by Cheryl Strayed and adapted for the stage by Nia Vardalos, is produced by San Francisco Playhouse and plays on its stage at 450 Post Street, San Francisco, CA through March 7, 2020.