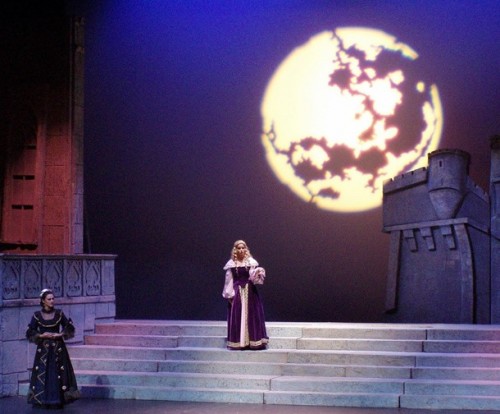 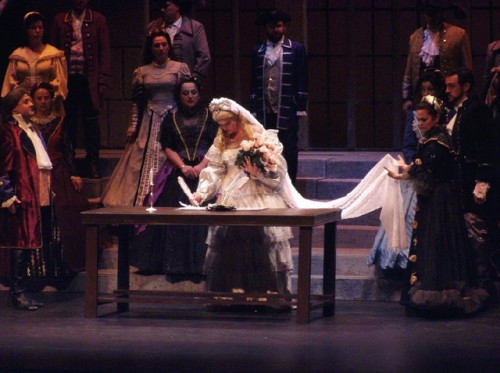 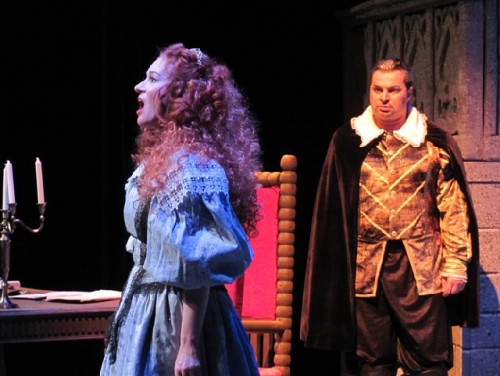 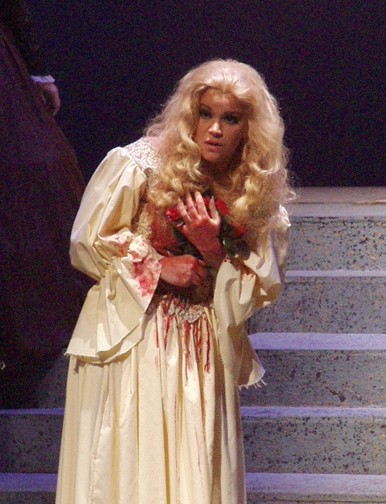 The sets were flimsy, the costumes gaudy and generic – you suspect they’re used in other productions – the acting rudimentary, and the orchestra, thanks to the Cutler Majestic’s lousy acoustics, sounded two-dimensional like an old acoustic recording. It was what opera used to be like in the old days before the rise of the director as star.

Oh, did I forget to mention that the singing, the sine qua non of bel canto opera, was terrific – full-blooded and deeply committed? The international cast of soloists sang their hearts out for an unfortunately small audience. There were more than a few moments of thrilling vocalism.

It was just another night for Teatro Lirico d’Europa, the longest running road show in international opera. Like the song “There’s No Business Like Show Business,” they’ll be playing in Philly and Buffalo before most of us have even digested what we experienced with them here.

Created in 1988 by a Frenchman and a Bulgarian and based on singers who had been excellently trained in Bulgarian conservatories, the company hit the road as the Soviet Union and its satellites fell apart. They put on 250 performances a year in small European theaters, and then, under the direction of the Bulgarian, the indefatigable Giorgio Lalov, they moved on to the United States, where they’ve performed in 108 venues all over the country during the past 11 seasons. (I heard them a couple of times in St. Louis, where in the winter season they were the only opera in town.)

Boston has been one of the group’s regular stops, and they have put on what approached real seasons here – three or four productions of warhorses like “Lucia” and “La Traviata,” which they will present here in March. But the arrangement with the Cutler Majestic that has served them and the community well for the past decade has come to an end. For whatever reason, their contract has not been renewed by Emerson College, which now controls the Cutler Majestic and the Paramount theaters. It is our loss.

Not that the kind of opera the Bulgarians, as they are fondly called, put on is the only kind of opera you would want to see. It serves as an entry to a complex and often arcane art form. But being able to see an old-fashioned production of “Lucia” the same week as Boston Lyric Opera’s “The Emperor of Atlantis” enlarges one’s appreciation of the full spectrum of the medium from the traditional to the experimental.

A lot of pseudo-sophisticates in the opera world pooh-pooh opera’s central repertoire – the so-called warhorses – as over done. That may be true of Puccini’s greatest hits, but for the most part, they can’t back up their dismissal with facts. When was the last time “Lucia” was done in Boston?

Boston Lyric Opera did it in the 1997-1998 season, and it presented an oddity, the French version, “Lucie de Lammermoor” in 2005-2006. Is that overkill for one of the greatest operas ever written? Recently, when I was thinking about opera, the question arose of which one I would choose to hear if I could hear only one more. “Lucia” immediately popped into my head. I was a little surprised, but then I thought, why not? What opera would you rather hear if you could hear no other ever again?

The opera, based on “The Bride of Lammermoor,” a once popular novel by Sir Walter Scott, tells a variation of the Romeo and Juliet story, set in Scotland. Two young lovers from feuding families come to grief when the young woman is betrothed to someone else. The scenario allows for rousing group interactions (the famous sextet, one of the great ensembles in opera history); moving arias and loving duets by the two principals, Lucia and her would-be lover Edgardo; and the famous extended aria sung by Lucia when the contrary demands placed on her drive her to kill her husband on their wedding night and then wander, hallucinating among the wedding guests (the even more famous “mad scene,” the test for all coloratura sopranos).

The work, first presented in Naples in 1835, is the essence of Romanticism.

Lucia was fearlessly sung by Olga Orlovskaya, a young Russian soprano. A glamorous redhead, she suggested Lucia’s emotional fragility from her first appearance. Orlovskaya excelled at coloratura, although her voice was a little constricted toward its top. She totally nailed the mad scene, however, negotiating the perilous changes in tempo and dynamics and hitting all the high notes without apparent effort. Her performance was heartbreaking. (Although she should reconsider her windmill-like arm waving to suggest derangement.)

As Edgardo, Ukrainian Igor Borko, was the real thing, an Italianate tenor with the requisite ping. (Too bad about the hideous wig he was forced to wear.) A soloist with the National State Opera in Kiev, one wonders why he doesn’t have more of a presence in major houses in the United States. I’ve heard far less persuasive tenors on the stages of supposedly major American companies on many occasions. In the gorgeous Act I duet with Lucia, in which the two promise to exchange vows of love on the eve of Edgardo’s departure for France, Borko’s and Orlovskaya’s voices mixed beautifully, creating a sound greater than the sum of its two (excellent) parts.

In the minor role of Raimondo, Lucia’s tutor and spiritual advisor, veteran American bass William Powers was powerful and brought attention to his subtlety and skill whenever he sang.

Other principals, including Plamen Dimitrov as Lucia’s brother Enrico, Arseni Arsov as captain of the guards, Viara Zhelezova as Lucia’s maid, and Yuri Nikolov as Lucia’s ill-fated husband – all Bulgarians – were all fine, with Dimitrov especially deserving of praise.

It’s hard, if not impossible to judge the conducting in a theater with such poor acoustics, but Krassimir Topolov, a Bulgarian who has been the company’s principal conductor since 1995, kept the proceedings moving with a propulsive beat.

The Teatro Lirico d’Europa returns to the Cutler Majestic March 4 and 5 with Verdi’s “La Traviata,” in what it is billing as its final performances in Boston.