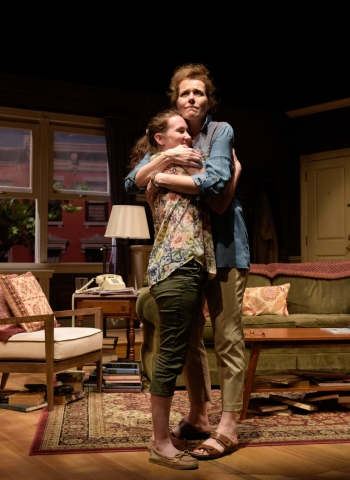 Her wide eyes betray an expression of bewilderment, wariness and anger. Steiner in no way resembles the tall, handsome, erudite and pleasant professor of act one.

Late in the play, set in 1990s New York City, Steiner walks slowly, with a hunched back. She holds a garment tightly around her as though she were cold.  However, she's heated with indignation and upset about what the young woman opposite her has done -- using the older woman's past as a basis for her first novel.

Does Steiner even have aging-related dementia? Has her young friend and student, Lisa Morrison, caused Steiner such severe heartache that it's sapped all energy and rationality from the once-dignified woman? Or is Steiner faking her symptoms to gain sympathy, knowing fully well that Morrison just approached writing as the professor taught her?

You won't find clear answers in the play; moral uncertainty in matters of art and society as well as untidy endings abound in Margulies work.

We're left to come up with our own answers after seeing the play, which opened Friday in Palm Beach  Dramaworks' intimate Don and Ann Brown Theatre. The play runs through March 5.

Great theater has the ability to make us probe our moral conscience, forcing us to re-examine our values and think about how we'd act if we were in a character's situation.

Morrison's a young, eager writer and college student who highly values Steiner's advice; she practically worships the older woman, who has taught her, "You can't censor your creative impulses because of the danger of hurting someone else's feelings. We're all rummagers. All writers are. Rummagers at a tag sale. Picking through the neighbors' discards for material, whatever we can get our hands on. Shamelessly. Why stop at our own journals?"

In this two-character play, the actors need to make their characters likable and recognizable, believably portraying imperfect people trying to do what's right.

In this production, Anne-Marie Cusson as Steiner and Keira Keeley as Morrison believably bring such people to vibrant life.

The tall Cusson, impeccably dressed with glasses sometimes perched on her nose, lends Steiner a professorial air of calm, polish and modesty. Often, there's an air of sophistication in Cusson's upstanding Steiner, a good match for the eloquence of McNally's smart writing.

Steiner, at times, carries an aura of pride, but Cusson ensures she never comes across as arrogant. Cusson finds the humanity in this woman; she's not a perfect saintly scholar, but a flesh-and-blood human being, faults and all.

Cusson's at her strongest when she relates her secretive past, doing so in a deliberate, nuanced manner, her emotions palpable and real.

Keeley excels as Morrison in the second act, delivering a believable, intense, at times nuanced performance. She fares less well in the first act. She needs to believably convey an insecure, wide-eyed, naïve young woman who is in awe at her professor. Instead, Morrison comes across as a hyper-active, restless young woman who's a bit too confident. As a result, there's not enough contrast between the insecure Morrison, as written by Margulies in the first act, and the aggressive, assured young woman in the second act.

Director Paul Stancato varies the pacing effectively, but needs to direct Keely to act more tentative and wide-eyed in the first act.

There's a contrast between the beginning and ending of the production. As the play opens, we're in Steiner's spacious, elegant New York City apartment (designed with appropriate details by K. April Soroko). It's orderly and spotless.

At the end, a confused, angry Steiner grabs a bunch of books from a case and throws them forcefully onto the floor. The neat, orderly apartment in the beginning corresponds to Steiner's clear-thinking mind. The splattered books can represent Steiner's disorganized mind and disrupted life.

Steiner's student has used her professor's life as inspiration for her first novel. Sthe believes it amounts to her protégé stealing her stories. Morrison insists she was pursing a writing project just how Steiner taught her.

Margulies never takes sides, giving equal weight to both women's arguments. The ending is as untidy as the apartment floor, with those books splattered across it.

We leave the theater and are left to ponder who is right, Steiner or Morrison?

Or is it not as clear cut as that?