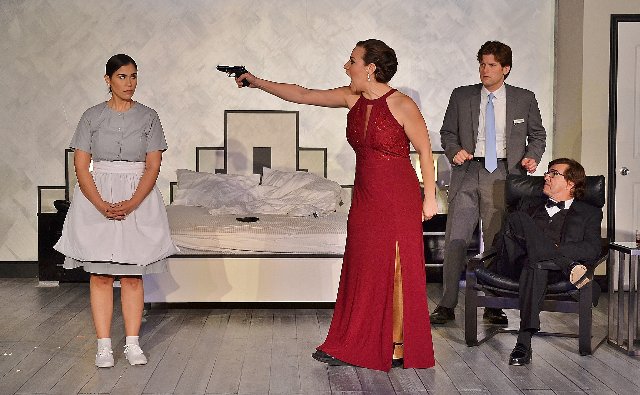 Folks won’t find a “splash zone” in the seating area at Main Street Players’ venue in Miami Lakes. That is where the unapologetically gnashing, shameless and hysterical satire has opened in a furiously funny production running through Feb. 25.

Audience members will not get physically wet or dirty. However, they might feel the need to cleanse themselves spiritually from all the slime, filth and inhumanity emanating from the world on stage.

Well, what did you expect? The play is set in the ruthless playland known as Hollywood. It’s a cutthroat world, as you probably know, where many in power need to see The Wizard of Oz as much as the Cowardly Lion.

As McKeever vividly and unabashedly demonstrates in his outrageous, taut play, these people tend to be heartless, full of hubris and in short supply of humanity.

“I’m assuming I don’t have to point out just how colossal a pigfuck this is,” manager/agent Jarrod “Hilly” Hilliard remarks about a character early in the play.

Hilliard is referring to a hooker named Travis, whom Roderick Randle skillfully plays. At various turns, he convincingly conveys flamboyance, defiance and a sense of someone trying to maintain a shred of dignity. To say much more about Travis would be to ruin many of the surprises, twists and turns that McKeever has in store. The unexpected comes at you with racecar-like speed in this play. You might find its action more entertaining than many award-winning films these days.

Clark Gable Slept Here is set during the present, on the night of the Golden Globes. We’re in a penthouse suite of the renown Chateau Marmont hotel on Sunset Boulevard.

The room’s occupant is one of Hollywood’s brightest stars, a character we never see, but hear via a voiceover. The celluloid star’s specialty is action movies. On this night, he is up for a Golden Globe “Best Actor” award for one of his films. He also has a big announcement to make – and much to Travis’ chagrin, it’s hardly the revelation the hooker hoped for.

Excitement is high on this night and the hotel is filled to capacity. There’s just one problem: A maid has discovered a corpse lying on the floor of the suite. With image and reputation at stake, the movie star’s publicity team will do whatever it takes to keep the night running smoothly and the incident a secret.

But in a town where secrets tend to spill fast, will the team be able to keep it all hush-hush?

At least Hilliard has a Hollywood “fixer” to whom he can turn. Such a person is an individual paid to keep a lid on the undesirable details of stars’ private lives. Again, image, status and symbol are everything here. They’re more important than someone’s feelings.

Sandi Stock plays the fixer, Morgan Wright, with an almost uncontrolled impulsiveness and forcefulness. After she’s summoned, Stock’s Wright barges into the suite and is in complete command. She speaks loudly, sarcastically and carries superior airs. Her red, sparkling outfit (part of Angelina Esposito’s character-defining costumes) befits not just the importance of this night, but her glamorous aura. You do not want to get on this woman’s wrong side. Some might even call her a bitch, although Stock manages to imbue Wright with some compassion. But don’t think for a second that this “fixer” is concerned about those to whom she treats with kindness. This woman has reasons for acting certain ways.

In contrast to Stock’s performance, which includes many big choices, Clint Archambault’s Hilliard is more restrained. That’s not to say he plays the role with a calm and collected aura.

Archambault’s Hilliard is a knot of nerves and tension, pacing here and there and leaning forward in attack-mode. He can be ruthless. But unlike Stock, Hilliard employs more restraint in his portrayal. It’s as though his character is trying to control himself and preserve a positive image – even as he creeps ever closer to a boiling point. One might envision an actor playing Hilliard with Nathan Lane-like ferociousness and intensity, a la Max Bialystock in The Producers. To his credit, Archambault’s portrayal possesses nuance.

If Hilliard is at all like Bialystock, hotel manager Gage Holland shares similarities with mousy accountant Leo Bloom. Holland is idealistic – a young man proud, but not arrogant, about the job he’s done managing such a fancy, fine hotel. Try as he might, he can’t understand how people could behave so heartless. Holland would find good company in A Streetcar Named Desire’s Blanche Dubois.

Chris D’Angelo lends Holland a wide-eyed, tentative, eager and innocent aura. He comes across as a nervous and green young man whom Hilliard is schooling about the dog-eat-dog world of Hollywood.

A maid, Estella, also finds herself amid the mess. Marcela Paguaga’s delightful performance is a major reason why this production is a laughfest. As she describes in Spanish an outrageous situation in a highly dramatic manner, you can’t help but at least chuckle. Director Ferry has given Paguaga the freedom to widely gesture and move about the stage to make this character as funny as possible. Paguaga changes emotions seamlessly and quickly, which adds to the humor.

Had McKeever set his play on the night of the Oscars, the stakes would’ve been much higher. The Golden Globes are a precursor to the Academy Awards, Hollywood’s biggest night.

McKeever writes with an unapologetically wicked wit. He also demonstrates a keen ear for and understanding of Hollywood lingo, types and situations.

Theaters throughout America, Europe and Russia have mounted this writer’s plays. Hopefully, we’ll see many more works from this insightful playwright, who serves as managing director of Miami’s award-winning Zoetic Stage. The company gave Clark Gable Slept Here its world premiere in 2014.

Surprisingly, such a funny, tightly-written farce-like play is also meaty and thought-provoking. The piece, for instance, opens our eyes to how Hollywood makes us view movie stars as legends and products. Tinseltown has desensitized average folks; we “ordinary” citizens don’t view movie stars as flesh and blood human beings with wants and needs like the rest of us.

“Patrick Zane is not a human being,” Hilliard says at one point, referring to the fictional movie star in the play. “Patrick Zane is a multinational enterprise. He is a billion-dollar industry that impacts the lives of thousands of people. A billion dollar industry that has been carefully and methodically cultivated over the past two decades until it was honed into the well-run, well-respected, possibly award-winning brand that it is tonight.”

“You see, I hid behind a façade for so many years,” Zane says during his acceptance speech. “And it is with enormous relief and huge gratitude to one incredibly special person that I reveal myself for what I really am…”

But do we know who he really is?

Do we really know the real persons behind those whom we admire and look up to? Scandal after scandal is coming to light as people come forward years after they’ve happened.

The culprits are often people we’ve admired and known for a long time from their years in the limelight. They project an outer image that Hollywood and the media have carefully cultivated.

McKeever’s play, in a hugely entertaining, humorous way, awakens us to Hollywood’s power.

Meanwhile, credit must go out to Main Street Players. It has existed as a community theater since 1974 and became professional only last year. We’re seeing how quickly it is adapting to its transformation, with yet another strong production.

Clark Gable Slept Here runs through Feb. 25 at Main Street Players’ theater, 6766 Main St. in Miami Lakes. Showtimes are 8 p.m. Fridays and Saturdays as well as 2 p.m. Sundays. Ticket prices are $30 for adults and $25 for students and seniors. For tickets, visit www.mainstreetplayers.com or send an e-mail to info@mainstreetplayers.com.