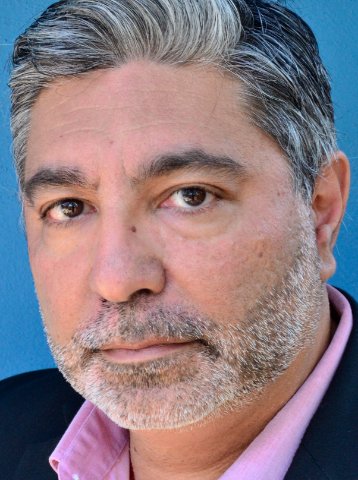 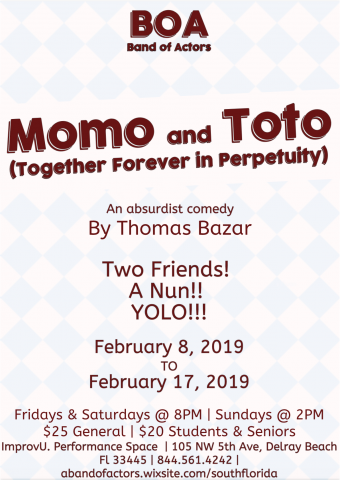 Here is an advertisement for A Band of Actors' second production of its existence.

Like any artistic head of a theater company, Thomas Bazar wants his new troupe, A Band of Actors, to become “more vibrant, more visible.”

But it did not take long for the organization, one of South Florida’s newest live theater companies, to attract attention.

A Band of Actors made its debut in September with Maximus O., a play written and directed by Bazar.

In addition, he was one of the cast members. The play’s tagline: Two killers. One Room. No Escape.

Contrastingly, A Band of Actors’ second production, which will run this weekend and next, is much more in the vein of Theatre of the Absurd.

This style of theater, which Bazar says he finds interesting, basically posits that humanity’s existence is devoid of meaning or purpose. Therefore, logic and argument give way to the illogical and irrational.

Samuel Beckett penned his classic play Waiting for Godot in this style. And Bazar says that there are echoes to that classic in A Band of Actors’ current production, a play titled Momo & Toto (Together Forever in Perpetuity). Theatergoers can see for themselves just how much Bazar’s play and Waiting for Godot have in common during its run. Show dates are Feb. 8-10 as well as Feb. 15-17. Curtain times are 8 p.m. Fridays and Saturdays, as well as 2 p.m. Sundays at Improv U., 105 NW 5th Ave. in Delray Beach.

In fact, audience members may not only find echoes of Beckett in the play. Indeed, if you take a blender, throw in some Abbott and Costello, Laurel and Hardy, Christopher Durang, Tom Stoppard, Luigi Pirandello and Pancho Villa, you’ll end up with something like Momo & Toto.

The “Fourth Wall” largely doesn’t exist between the play’s title characters and the audience. For instance, the pair argues, sometimes heatedly, with a sarcastic, eccentric patron, who considers himself “the voice of the people.”

Sure, this play contains its share of slapstick. However, Bazar points out that he also wanted a play with substance.

“I wouldn’t do it if it was just plain slapstick,” said the 30-year theater veteran.

While audience members will likely laugh often, the play will confront them with issues. They include the line between fantasy and reality, how we use language and the state of politics. But while parts of the play are issue-driven, Bazar avoids preachiness.

For example, at one point, Toto says, “We must fight the fight.”

And Momo responds: “The lawmakers won’t.”

Bazar says he tries to incorporate many elements into his work – poetry, low comedy, projections and music are a few of them.

In terms of his vision for A Band of Actors, Bazar said he wants to do less of naturalistic dramas and concentrate more on exploratory works. Also, he hopes to experiment with new ways of telling stories.

Among playwrights, he particularly admires Shakespeare and Beckett. Specifically, there’s a sense of “grandeur” to the Bard, while, at least in part, mystery and poetry characterize the latter’s work.

Of course, man’s purpose (or lack thereof) is a prominent them in Waiting for Godot — a work that Bazar concedes he “didn’t get” when the 52-year-old read it in his early 20’s.

As a matter of fact, Bazar admits he was trying to find his own purpose in life during that time. In college, he was trying to settle on a major, when he stumbled upon an acting class. He thought he could receive an “Easy A” by taking the course. At the same time, live theater was always “there in the back of my mind.”

Perhaps his father helped influence that interest. While the elder Bazar wasn’t into theater, he was always reading.

Bazar was born in Iran to Iranian parents, but when he was 5, they brought him to the U.S.’ west coast, where they raised him. Eventually, Bazar settled in Philadelphia, where his wife, Liz, is from.

In the City of Brotherly Love, Bazar ran a theater company, which folded after he struggled to secure funding. From Philadelphia, Bazar made his way south, eventually settling in Palm Beach Gardens, north of West Palm Beach.

A Band of Actors is a “young, upstart company.” Among other things, the company aims to work with high school and university students to make live theater accessible to them. For instance, youngsters receive experience backstage.

“We believe in the performing arts as a tool to educate and transform lives,” reads the troupe’s website, located at https://abandofactors.wixsite.com/southflorida/

“It’s almost like a café space; that’s perfect for us,” said Bazar, who also runs the theater program at a private school in Palm Beach Gardens.

Live theater “gives me a purpose,” he said, adding he enjoys the creative process inherent in the art form.

The “utter theatricality and irreverence” of the genre draws him to it.

Of course, he hopes A Band of Actors’ current and future work makes the company more visible.

Still, he said he’s impressed with how well his young company has fared so far.

“This community has really embraced my work,” Bazar said.