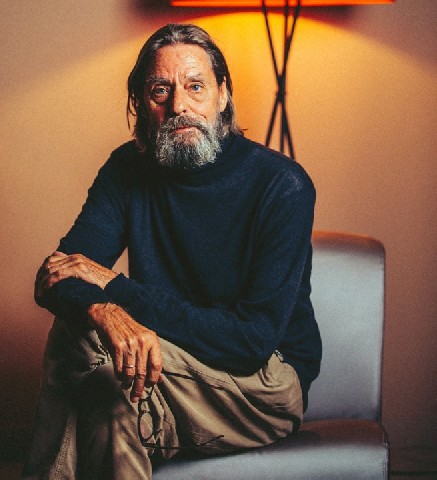 The publisher Valiz Amsterdam has published a book about the life and work of the performance artist Ulay. The book ‘Whispers: Ulay on Ulay’, 536 pages with many illustrations, includes participations of Marina AbramoviÄ‡, Laurie Anderson, Timea Andrea Lelik, TevÅ¾ Logar, Thomas McEvilley, Charlemagne Palestine and others. His work is introduced and analyzed by Maria Rus Bojan a Romanian art critic and curator and Alessandro Cassin, an Italian journalist and critic based in New York. Next weekend the book will be presented at the Art Book Fair in Los Angeles.

Ulay (°1943, Frank Uwe Laysiepen,Solingen Germany) was formally trained as a photographer and is one of the central figures of European performance art scene since the 1970s. In the early period of his artistic activity (1968-1976) he undertook a search for understandings of the notions of identity and the body. He works together with Jürgen Klauke in Cologne (Germany) and moved later to Amsterdam. He met there Marina Abramovic and collaborated with here (1976 to 1988 ) on numerous performances worldwide.

After breaking with Abramovic, Ulay focused on photography, addressing the position of the marginalized individual in contemporary society and re-examining the problem of nationalism and its symbols. In 2010 he met Marina Abramovic again during her performance ‘The artist is present’ at the MOMA, New York. He participated as so many others! In the seventies I met him in the studio of Jürgen Klauke and in the gallery Seriaal (Wies Smals, Amsterdam). An artist with a strong personal presence. His work affected the fundamentals of the current social patterns. In 1978 I engaged Ulay en Abramovic to participate – with photographs – on the Art Performance Festival Brussels which I was the curator.

In recent years, Ulay has been mostly engaged in initiatives that raise awareness and appreciation of water. Ulay currently lives and works between Amsterdam and Ljubljana.

In 2011, soon after he moved to Ljubljana, Ulay was diagnosed with cancer. Framed by his battle with the disease – and subtitled 'Ulay’s Journal from November to November' – this documentary by Damjan Kozole gives space for a vital retrospective on dealing with his illness and looking back at his life. 'Project Cancer' recounts Ulay’s career via interviews, archival video, photographs, and reproductions of his more ephemeral work. Far from wallowing, however, the consistently upbeat Ulay muses all the while on the nature of life, love, history, and art.

A new book ‘Whispers: Ulay on Ulay’, published end 2014 by Valiz Amsterdam, discusses his practice. The book reveals an extremely innovative oeuvre that is coherently rooted in a personal life philosophy, which is guided by strong ethical principles. This book attempts to uncover the threads that weave the seemingly disparate aspects of his work into a fabric of passionate pursuits, driven by a rigourous inner necessity. Ulay says ‘I have produced a very bizarre body of work. I have experimented a lot’.