What's New at the Metropolitan Opera 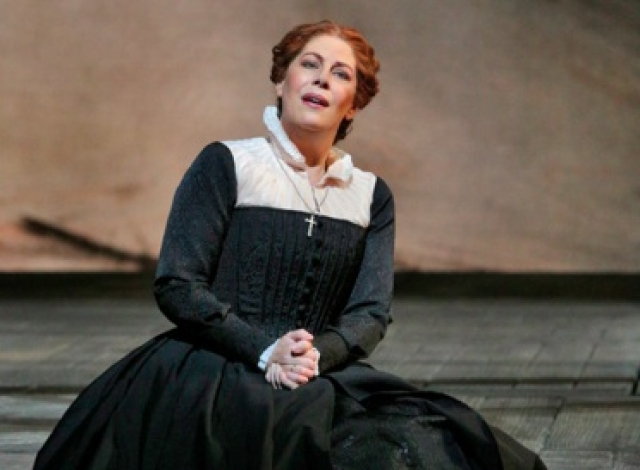 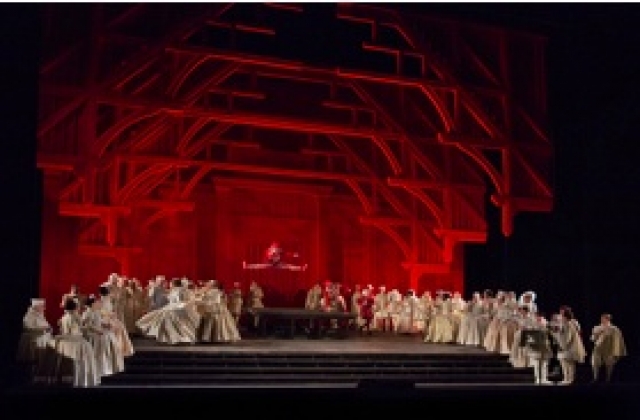 McVicar and McFarlane in Maria Stuarda. 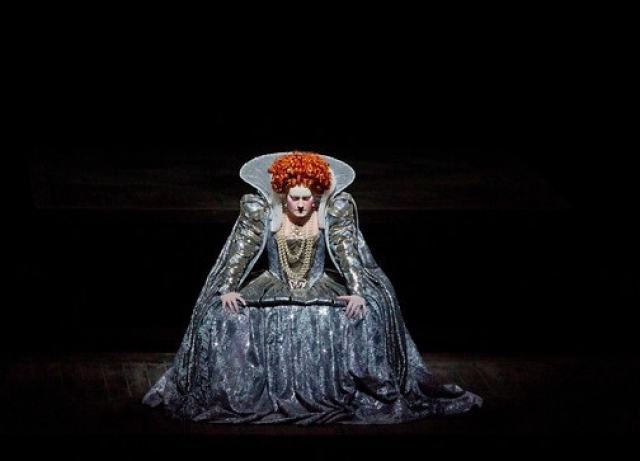 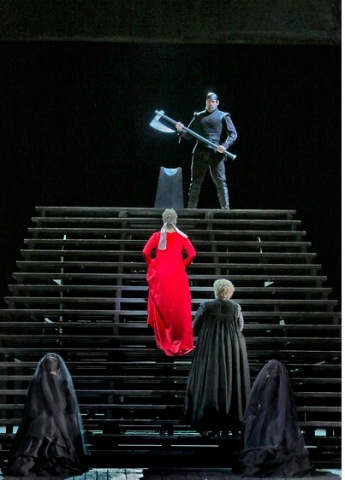 Maria Stuarda goes to her death. 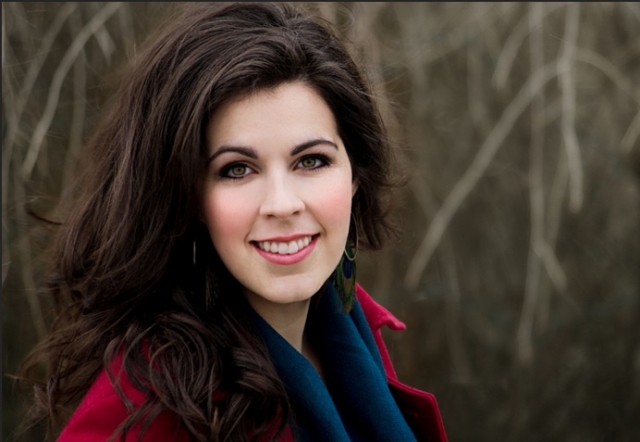 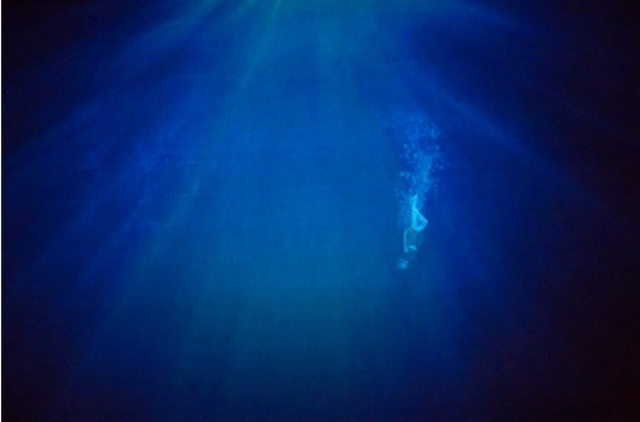 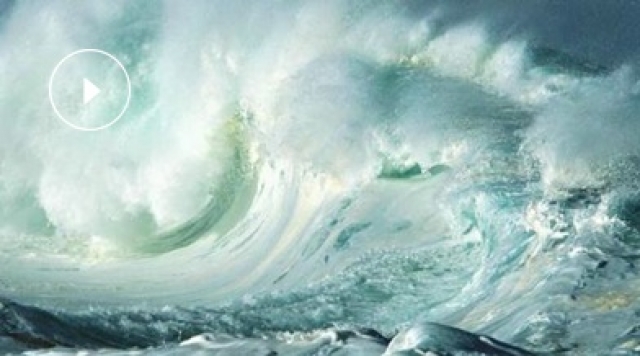 A tsunami in Pearl Fishers. 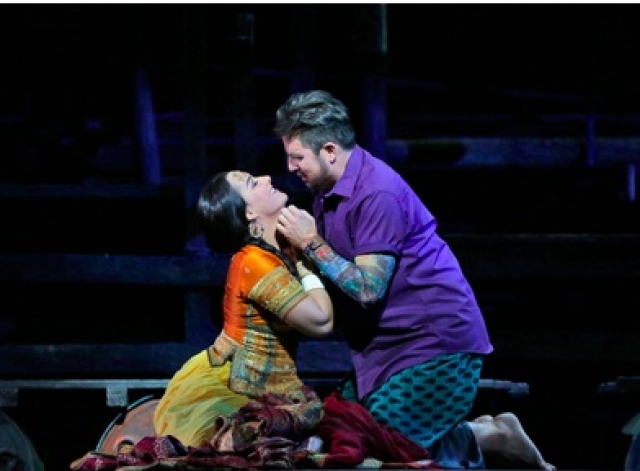 Leila and Nadir in Pearl Fishers. 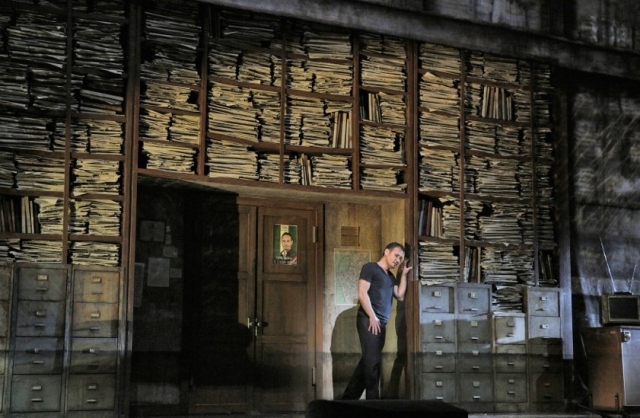 An unfathomable scene in Pearl Fishers.

It seems just yesterday that Placido Domingo marched into General Manager Peter Gelb’s office and told him that he must keep the great soprano Sondra Radvanovsky on the Metropolitan Opera roster. Gelb could not say no. And so we have this season Donizetti’s Queens with Radvanovsky singing Anna Bolena, Maria Stuarda and Elizabeth.

Try to think of another voice whose soft pianissimos fill every crack and cranny of the Metropolitan Opera House. Radvanovsky’s voice is naturally large and her perfect presentation seemingly effortless. Early in her career some complained that she had two separate voices, but even then opera aficionados loved her tones and the texture of her ‘voices.’

Now the 'voices' have joined. Radvanovsky herself says that this took years of development.

Radvanovsky is also a skilled actress who brings all the emotion and drama of her role into her voice and its music. Like Janet McTeer who played Schiller’s Mary on Broadway four years ago, Radvanovsky was born to be a Queen. So too Elza van den Heever, who Director David McVicar camps up in masculine togs under her skirt. Yet where Harriet Walter seemed dry as Elizabeth on Broadway, van den Heever, in her delightful soprano, makes Elizabeth more vigorous than jealous.

This production is one of McVicar’s best. The scenes are framed tableaux, painterly in their textures and colors. John McFarlane gives us Elizabeth’s quarters bathed in blood red. The scene in the Fotheringhay woods has textured trees and a background sky of yellow, ochre and grey ominously mixed. Jennifer Tipton lights Mary’s dark jail rooms and the scaffold of her doom in white light, almost heavenly. The light from behind Mary’s door is white and gives hope that she might avoid her inevitable beheading. Early in this scene, a waft of cannon smoke billows down the stairs, suggesting the arrival of a mysterious creature. It is a magnificent evening of opera, crowned by Radvanovsky.

Amanda Woodbury sang Leila in the final performance of Bizet’s delicious Pearl Fishers. James Conlon, whose taste in singers is impeccable, has promoted Woodbury at the Los Angeles Opera and also in Cincinnati. Her lovely lyric voice is clear and sweet, but also full of emotion. In her aria, which begins with a prayer and ends on a love note, she comfortably switches between extreme moods. In an unusual but pleasing story change, one of the lovers of the priestess actually recognizes her voice when she sings, although she is in disguise.

Woodbury is fortunate in the men, who surround her. The luxury casting of Matthew Polenzani, Mariusz Kwiecien and Nicolas Testé provide a perfect artistic trio for Bizet’s lovely melodies. Kwiecien and Polenzani are particularly moving in the famous duet “As we enter the temple.”

Unfortunate and awkward blocking of the artists and skimpy orchestration (this was a rush job for Bizet) do not interfere with the lyrical delights of the arias and duets. In fact, Bizet has created vocal and choral music, which is among the most beautiful in opera. Diana Damrau asked for this opera's mounting and was a tender and yet passionate Leila in earlier performances and the HD production. Pearl Fishers deserves to be in the repertoire if it is cast properly and in this case it has been.

The house was half empty for both opera evenings. Gelb had decided that the behavior of his front-of-the-house staff is causing attendance fall-off. Recently, he required the staff to attend a three-hour training session in which they were instructed on being warm and helpful. Anyone who attends the Met regularly knows that its staff is arguably the warmest and most helpful at any venue in New York, or for that matter around the world.

In Gelb’s favor, the Met is simply too big to fill all 26 productions per season. Either the schedule should be cut way back, or someone should  figure out how to carve a 2200 seat house out of the current incarnation. In the 21st Century a 4000 seat house producing for eight months makes no sense in the US.