Opens in April at at LA's Freud Playhouse 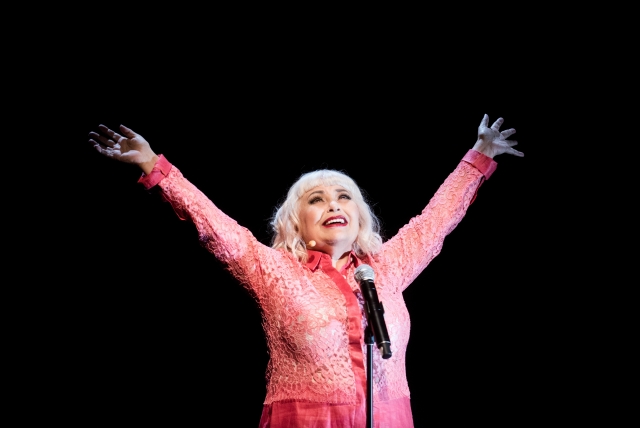 I have always appreciated the bravery, as well as the chutzpah, of those performers who choose to go it alone in a one man or one woman show. Not unlike comedians who stand totally exposed before an audience hoping to avoid the slings and arrows, or for that matter the stink of rotten tomatoes, these all but naked actors rely, ultimately so, on the shear force of their god-given personality, and well-honed talents, to wow their audience, and in the best of cases, bring them to their feet amidst thunderous applause.

Some find success and go on to bigger and better things. Others, with their tail between their legs, never to take to the stage again, slink back to their dressing room to nurse their wounds. Ask any critic dead or alive and they will tell you that there is nothing more deadly than spending a couple of torturous hours watching a solo performer deconstruct on stage. Mercifully, this has never been the case with Penny Arcade who next to the Energizer Bunny is the hardest working performer in the business. At each star turn, and I have seen a great many over the years, she keeps getting better and better.

Having recently seen Arcade’s Longing Lasts Longer, a lively exegesis on what’s wrong with this world with a dollop or two of survival advice  – it ended its two week run at St Anne’s Warehouse in Brooklyn in mid December  – I was pleased to hear that it is already racking up future bookings. It can be seen this coming April 8th and 9th at the Freud Playhouse in Los Angeles. And then, more than likely, as the lady cannot sit still, she will be taking her show – it was a big hit in London last year – to yet another city or back to Europe where the audiences just go crazy over her.

I first saw Longing Lasts Longer at Joe’s Pub at the Public Theater early last year. As are most of Arcade’s New York outings the night club was filled to the rafters with loyal followers, each hanging on her every word and expression. If memory serves me correctly, this idea-filled production – essentially “a work in progress” which one could say all of her works are because she is continually evolving – was delivered by Arcade fast, furiously, and seemingly off the cuff in a somewhat helter-skelter manner.

Not so with this newly revised production of Longing which was staged at St Anne’s Warehouse in Brooklyn (December 1-11 2016). Designed and directed by Arcade and Steve Zehentner, her long time collaborator, this “new” Longing bore little resemblance to the “old” Longing in either script or performance. Here we got a well-researched and tightly crafted stage production worthy of an HBO special with scads of newly minted Arcade expressions, Ellen Degeneres type dance moves, and over 100 musical sound and light cues, each perfectly timed to both introduce, as well as fit the material being discussed.

Arcade is widely known for her trenchant observations, most of which echo our very thoughts and concerns. Yes, we love her bringing them out into the open and thrown back at us in her signature style which could be described as “in your face.” Not a shrinking violet, she adamantly lets us know, in the most entertaining way, what is on her mind, as well as ours. Working in tandem, the delicious “call and response” banter between Arcade and Zehentner having never been tighter, brought the audience closer, as privileged participants, to the inner workings of the production.

As usual with Arcade, whose mind is always roaming the world, the topics she chose to tackle ran the gamut from cultural history, growing up, crowd mentality and consensus, the loss of individuality, mediocrity, as the new black, relationships, New York, and a slew of other subjects that caught her fancy. Quite surprisingly, exposing her well-read intellectual side, she talked about Edward Bernays “the father of public relations.”

She also discussed Guy Debord’s 1967 book The Society of Spectacle which not surprisingly brought our recent presidential election to mind. Here Dedord discusses Integrated Spectacle, a kind of mass hypnosis triggered by the merging of the government, the financial institutions, and the technology with advertising and media to create a powerful illusion of reality, one in which there’s no real news but spectacle, a circus show, car wrecks, all distractions from reality.

In two of my favorite riffs, perhaps a little less serious then the above topics, Arcade talked about Snow White and sidewalk behavior, the former a clue to the Arcade’s  inner makeup, outer behavior, and her early theatrical bent; the latter, a sign of dwindling manners and the growth of rabid self-interest.

Arcade’s rant on annoying sidewalk behavior, especially here in New York City, where everybody thinks that they alone own the street, is a topic that has long been on my mind. It was only a few decades ago, when life seemed a lot simpler, that people used the right lane going both ways like a two-way street. Then all of the sudden, perhaps having its beginnings during the Open Enrollment Movement of the 60s, and further exacerbated by the Me Generation, the sea started to change and negotiating sidewalks became a series of dodges not unlike those in a football game.

She explains this phenomenon, quite humorously at that, in her own inimitable way. “The streets of our cities have been taken over by zombie tourists, mobs of them. It’s turned into a mall out there with hordes of shoppers overwhelming our cities, eating everything in their path, trampling over each other to shop in the same stores that they have at home.

These people take up the entire sidewalk. From watching Sex and the City, they think they’re supposed to walk four abreast even when there are 15 of them. In New York we walk fast. When we walk we are going someplace. We are used to living in close quarters. New Yorkers do not walk into people! When we pass you on the street, we dip! This is something everyone used to learn their first  year in New York. It’s the innate choreography of the city and it is a beautiful thing.”

In ending her 90 minute show, Arcade waxes philosophically about happiness and  getting the best out of life, albeit with a tinge of resignation.
“Happiness is a decision you make. Happiness is not magic! Happiness is our legacy as humans. I’m even am happy when I’m miserable. Because it is my misery and I farm my misery out until it grows into happiness. I don’t need anyone to me happy and neither do you! I am already happy.”

Like Thoreau’s quote “The mass of men lead lives of quiet desperation…” Arcade reminds us that “Longing lasts longer, longer than anything else.”

And the only weapons in the face of certain death and annihilation, gentrification, amnesia and the erasure of history is joy, pleasure, gratitude, authenticity, individuality.

Arcade’s sage counsel is to “Own your life. Be the one that carries the history. Protect you authenticity…Live in your gratitude. That’s were the magic is.