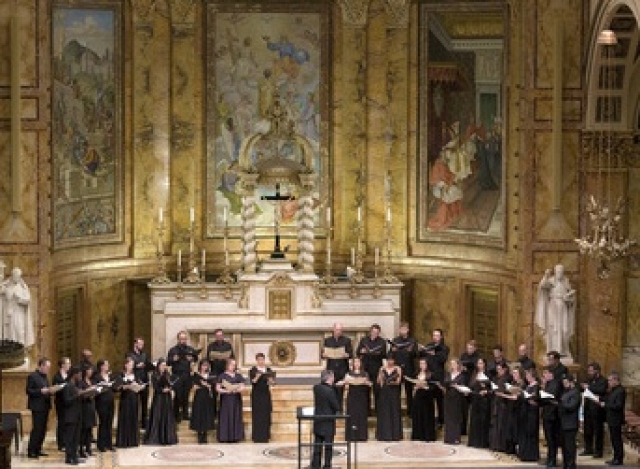 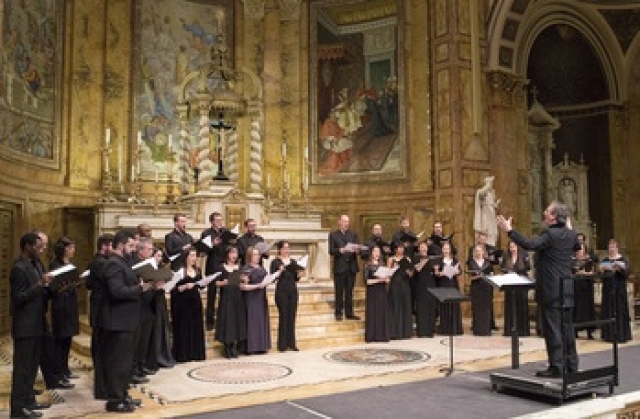 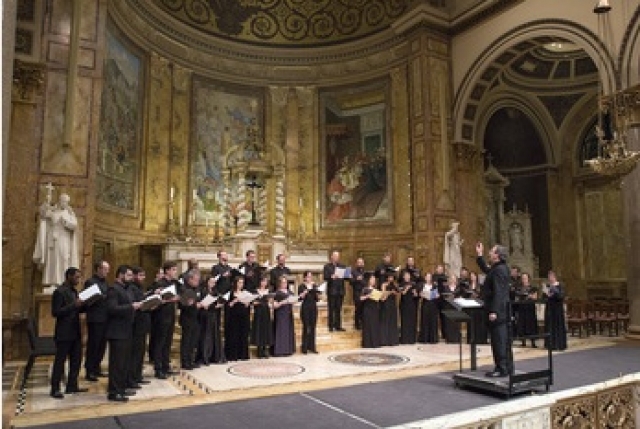 The double choir with the Carnegie Hall Chamber Chorus

Carnegie Hall is putting on Serenissima, a series featuring the music and arts of the Venetian Republic. At St. Ignatius Loyola, one of New York City’s acoustic treasures, the Tallis Scholars offered Venetian Voices singing in split choirs, both to provide more vocal lines and to speak to each other when composers asked.

Angela Gheorghiu, singing in a concert opera at Carnegie Hall, settled on a spot stage left and threw her voice off it. Artists are well aware of the acoustics of the halls and venues in which they perform. They must salivate when they’re told it’s going to be St. Ignatius Loyola, one of the few performance spaces than can be mentioned in the same breath as Carnegie Hall.

In Renaissance Venice, musical innovation was encouraged.   Split choirs written for festivals were performed at the great basilicas. The polyphony and the stereo effect of these choirs sometimes gets lost in the vast chambers of San Marco today.

How did audiences first hear the music performed?  Tapestries, wooden chairs and crowds of people would have focused the sound in the 16th century.

The walls of St. Ignatius are made of intricate American, European and African marbles, including pink Tennessee, red-veined Numidian, yellow Sienna, pink Algerian marble, white Carrara marble and veined Pavonazzo marble.  These marbles are not only lovely to look at, but contribute to the stellar sound. The arches and dome of the ceiling throw music off in sharper line.

No doubt the Tallis Scholars and their peerless leader Peter Phillips, know what they are doing in this setting and bring to the performance of Baroque music a sensibility that suits that style to perfection. From the first composer offered, Adrian Willaert from the North Netherlands, who was appointed choirmaster in San Marco, Venice in 1527, two choirs were positioned to not only provide multiple vocal lines but also to interact responsively. Willaert’s music has both a purity and a drama. Soprano voices carry with clarion tones in this extraordinary space.

Portions of the Mass Francesco Cavalli wrote for himself while he was in the here and not the hereafter gave a glorious sense of the composer. Cavalli did not pursue the dramatic but new-fangled ideas about music reflecting the emotions and pictures of the words are made clear by the singers.

Ubiquitous and multi-talented George Steel conducted Giovanni Gabrieli’s "Jubilate Deo omnis terra." In the Cipriarno Rore motet, the singers twist lines of melody in and out at first, and bring them forward and back, given the impression of three-dimensionality. When they directly address the women, the group picked up pace, varied rhythms and made switches to a more direct line.

Daniel Hyde performed several pieces on the organ. The clarity, the contrast and the beauty of his phrasing displayed the virtues of the instrument. Since its installation, the organ in St. Ignatius Loyola has been sought out as an instrument for liturgical and concert performances. The four-manual organ contains sixty-eight speaking stops, nearly five thousand pipes, and weighs over twenty tons; it is probably one of the largest mechanical action organs ever built in Great Britain. It is also one of America's most significant pipe organs.

The final composer, Giovanni Gabrieli expanded on the double choir and added instruments of all sorts. The Tallis group was joined, as they had been through the evening, by the excellent Carnegie Hall Chamber Chorus.

The acoustic space at St. Ignatius Loyola has been called perfect. The Tallis Scholars led by Peter Phillips also deserves this praise.

As we listen to music from the Venetian Republic, we admire their successful government which served citizens for 1,000 years. Part of the magic was surely the music.  Uplift in spiritual spaces may well help us solve some dark problems we face today.   Carnegie Hall provides a beautiful safe harbor of sound.