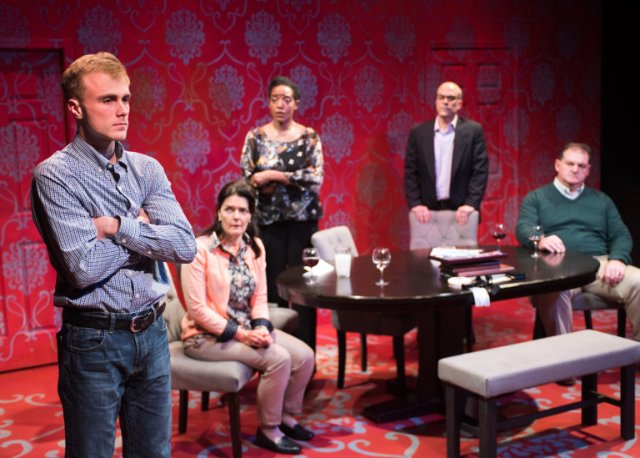 One of the painful experiences of parenthood is when one’s child is bullied. What parent doesn’t have the loving instinct to intervene to protect the child? But most know that the price of taking up for the child often results in more pain rather than less.

In Jordan Tannahill’s Late Company, that time has passed. Debora and Michael’s teenage son, Joel, has committed suicide. Although the obvious path for the parents is to suffer in silence and live with the memory of the lost loved one, Debora is driven by a need to find closure. That target would be someone who can be implicated for the condition that she feels had caused Joel to take his own life.

For those familiar with Yazmina Reza’s version of “adults behaving badly,” God of Carnage, you may detect its fingerprints on this drama. Indeed, the issues, the clash between the families, and even within each couple bears similarities. However, Late Company is based on a true incident that occurred in Canada, and the stakes are much higher in that a child has died.

Grieving Debora and Michael invite parents Tamara and Bill, along with their son, Curtis, the presumed leader of the brutal hazing, to dinner. So what can the parents of the deceased hope to accomplish by meeting these strangers at this point? Further, why would the parents of one of the bullies agree to meet?

As might be expected, the initial moments together are marked by both civility and clumsiness as the two sides feel each other out. As time passes, strategies emerge and clashes begin. Beliefs are challenged. What kind of parents has each couple been? What do they really know about their sons? How much responsibility do they share for their sons’ actions? Revelations abound.

The parents are suffering through agony presumably not of their own making. Tannahill’s narrative provides tense dialogues as the couples challenge one another’s motives and assumptions. Verbal conflicts escalate. Meanwhile, the perpetrator, Curtis, remains mostly disengaged until reading a letter aloud that he was asked to prepare for the occasion. But what could be expected from a cornered teenager? Would it be an apology, a justification, or denial? Would it be sincere or disingenuous? And what goes through his mind? Has he revised his feelings toward the deceased or changed in any other way?

Evren Odcikin directs an effective and well-selected cast that captures the many differences between the characters – gender, social class, and of course, presumed offenders and presumed innocents. Led by Desiree Rogers as Debora, her seething emotions always seem ready to explode. She is driven by objectives with the precision of an upper class hostess. Lawrence Radecker’s reserved and sometimes distracted Michael is a conservative member of parliament (but note that conservatives are pretty liberal in Canada). At times, he appears as distant as his workplace in Ottawa. Although he perceives himself as a responsible father, he realizes that his frequent absence carries a price.

In contrast, Kenneth Heaton’s earthy and straight-forward Bill, Curtis’s father, is more attuned to the daily life of teens and advocates the maxim that “Boys will be boys.” When the strapping Bill speaks the line, it makes one wonder what kind of teen he had been and what kind of example he presents to Curtis. Cheryl Smith as Bill’s wife, Tamara, begins with a conciliatory tone expected from her position and hopes for healing. However, like anyone else, she has her thresholds and has a mother’s sense of protecting her nest.

The most interesting casting is Baela Tinsley as Curtis. In many ways, he seems the antithesis of a conventional bully, but his quiet yet deft portrayal creates an ambiguity that yields another layer to the proceedings. All of the actors’ silences are poignant with reflection, though Curtis’s thought processes are almost palpable.

The production excels from beginning to end. The exception is the set. The floor, walls, and doors are covered with the same red and blue repeating pattern that presumably holds symbolic significance about the hosts’ station in life. However, this representation is unrealistic and distracts the viewer’s thoughts from the action. But that is a small criticism of a worthy theatrical experience.

Late Company by Jordan Tannahill is produced by New Conservatory Theatre Center and plays on their stage at 25 Van Ness Ave., San Francisco, CA through February 24, 2019.