Between Riverside And Crazy in Coral Gables 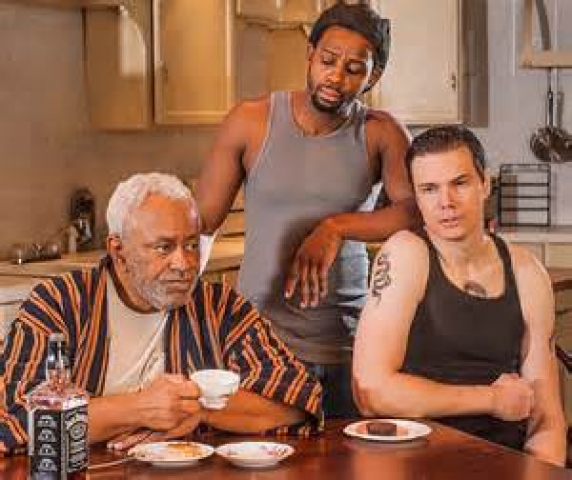 The desperate, proud man at the center of GableStage’s excellent production of Stephen Adly Guirgis’ Pulitzer Prize-winning dramedy “Between Riverside and Crazy” spreads his arms wide and yells his name as if for all of New York City to hear.

It’s a desperate plea for attention, a last-ditch effort to ensure that people realize he still matters after suffering through a situation that sounds likeone straight from today’s news.

Ex-policeman and widower Walter “Pops” Washington, with his arms spread wide, appears as though he’s looking for someone to hug him.

In today’s world, with headline after headline referencing white police officers shooting young black men, it would seem easy for “Pops” to find such an embrace.

As played by the excellent Leo Finnie in GableStage’s production of the tough, tender, funny and compassionate play, directed with sensitivity and detail by Joseph Adler, it would seem any audience would willingly hop on stage to give him a big group hug.

There are similarities between Washington and some of Arthur Miller’s “common men,” of which the playwright wrote about in The New York Times almost 68 years ago, in his essay “Tragedy and the Common Man.”

Washington bears some of the hallmarks of characters such as Miller’s Willy Loman. Washington is at odds with his son and his stubbornness as well as his pride are turning people against him.

That’s not to say they’ve embraced him ever since a white rookie police officer sprayed him with bullets. At the time, Washington was off-duty, inplain clothes at a bar with a bad rep at 6 a.m., his blood full of booze. Washington, in that state, could stand for any one of the myriad of African American males who’ve been shot by white police officers in recent times for reasons not entirely clear.

The wheels of justice haven't been turning for Washington. The lawsuit he filed was never settled.

Now, Washington's former partner (a sensitive, reasonable Beverly Blanchette) and her fiancé, Lt. Caro, also a police officer, have arrived at Washington's Riverside Drive apartment to convince him to sign a settlement. If he does, all of his problems will basically vanish, he’s promised.And “Pops” faces a myriad of problems.

The circumstances in “Between Riverside and Crazy” sound painfully familiar to what’s happening today, but Guirgis didn’t simply base his work on a recent incident.

In the play, Washington isn't only black, but was a member of the brotherhood of the men and women in blue. These facts are bound to provoke strong reactions in folks identifying strongly with the “Black Lives Matter”movement as well as the “Blue Lives Matter” group.

Guirgis has a keen ear for dialogue from the rough and tumble streets. His gritty, even vulgar dialogue sings as a kind of poetry from the hood.

But Guirgis also proves he has a gift for writing darkly comical dialogue. The crass and vulgar words, black humor and sympathetic passages and sentences combine to form a kind of orchestra whose sound somehow suggests people coming together.

Guirgis, a bold, unapologetic playwright whose works include “The Motherfucker with the Hat,” displays a deep compassion for the troublemakers in society. Guirgis doesn’t pretend to condone their behavior, but clearly believes redemption and even change is within their reach, given the right influences. The playwright provides further balance in showing compassion for police officers and their tough jobs.

Of all the characters in the play, Washington's son, “Junior,” appears to have the farthest road to travel before he changes for the better. As deftly embodied by Marckenson Charles, this dark- skinned African-American with muscles is someone you don’t want to meet in an alley at night.

He seems every bit the pimp to the prostitute Lulu (aptly named due to her goofiness and played as a ditzy New Yorker by Gladys Ramirez, who imbues Lulu with some humanity, instead of just turning her into a laughable, cartoonish caricature.

Charles' Junior, sporting two golden necklaces, a sleeveless shirt and an oddly-shaped hat, speaks with a loud, jarring voice and moves in an  aggressive manner. That’s particularly true when he’s trying to keep a mysterious woman known only as “Church Lady” (an exotic, yet sympathetic Sara Oliva) away from his feeble, ailing father. During this scene, Junior comes across as a vigilant, threatening guard dog.

As played by Charles, Junior might have a gruff exterior, but the actor also lends his character a soft countenance and voice, especially toward Pops.

Finnie brings Samuel Jackson-like intensity to Pops when he’s perturbed or showing his stubbornness. When he’s in that mode, Finnie is, toward the end, deceptively understated and calm, which enhances the dark comedy of the piece. The latter part of the play hints ever so slightly at Shakespeare’s “The Merchant of Venice.”

The entire cast presents a master class in naturalistic acting and nails a New York accent, particularly Michael Serratore as Lt. Caro, who’s engaged to Pops’ former partner and tries to convince the elderly man to sign the settlement.

Serratore speaks in a folksy, charming manner suggestive of the “Good Cop” half of a “Good Cop-Bad Cop” team.

There are seven characters in the play, including con-man Oswaldo (a strongly New York accented Arturo Rossi, sporting tattoos, visible thanks to his sleeveless shirt.)

New York City itself is almost a character, one which has shaped people such as Junior and Oswaldo.

Lyle Baskin’s detailed set includes a dark alleyway, complete with brick walls and a rusty-looking staircase. This is where Junior and Lulu oftenmeet. It symbolizes the darker, seedier side of New York City, a setting similar to one you’d see in “West Side Story.”

Guirgis’ play slowly builds in intensity toward its boiling point, honestly, poetically and compassionately portrays society’s lowlifes and does so with copious amounts of humor.

If August Wilson were alive and writing a 21st century New York cycle of plays, it might’ve shared similarities with “Between Riverside And Crazy.”