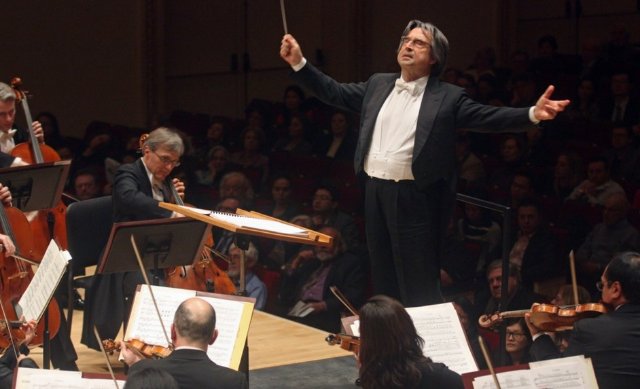 RIccardo Muti and the Chicago Symphony at Carnegie Hall

New York eagerly awaits the annual visits of the superb Chicago Symphony Orchestra and its iconic conductor, Riccardo Muti. At Carnegie Hall they did not disappoint.

The second program began with the Overture to I vespri siciliani. Verdi is a specialty of the Maestro's and he brought forward drama from hidden places. The irregular rhythms of the orchestra flared up, creating tension at the start. The military beat of the drums answered.

The woodwind solos almost whispered, providing a sharp contrast to the fast section that follows. Melodies in the violin and cello were heated by comparison. The entire piece erupted in details, including a tuba playing a part of the cimbasso, with menace, as it should be. Verdi's cimbasso is mostly relegated to movie scores these days.

Samuel Adams is in his third year as a composer in residence at the Chicago Symphony. The New York premier of his work many words of love was the next piece conducted by Muti.

The work begins with a strident, grating noise that grips. The full orchestra is engaged in all three sections. While this heft gives the sense of a sound cloud, that is not what you feel. Instead you are held in tightly and sometimes with irritating strokes Your attention is rapt at every moment.

Unusual bowing techniques give the string section a new sound. Some air sounds are without pitch. Harmonies are strung out. Notes are often not quite as we think of them, as a group of strings slides through one and a half tones. The mass is held together by an ascending and then a descending scale. In these motions, you are not on a slippery slope at all. Order underlies the ricocheting sounds. Often you are in a disorderly, strident space, but one that holds you.

Adams has written of his place and method of composition, and of the antecedents to the snatches of musical line. Why should we rely on what someone says about the origin of their work? It is always interesting, but many words of love holds up well without any foreknowledge. It intrigues and moves. It has satisfying solidity. Muti and the musicians gave it their all and engaged us completely.

The program concluded with Brahms Second Symphony. The warmest and most relaxed of the symphonies, Muti creates an almost pastoral atmosphere. Flute solos played by Stefán Ragnar Höskuldsson suggest the beauty of the country and nature.

The Adagio is meditative. melancholy and deeply felt. The final movement emerged full of vigor, an exuberant and exciting conclusion.

Muti returned to play an encore: the simple and gorgeous Entre-Acte No. 3 from Schubert’s Rosamunde.  Its  quiet and thoughtful tones felt a bit like a farewell. Yet there was also an offering of solace for difficult times. Muti has signed to conduct through 2022, so Muti and the Chicago Symphony will return to their home at Carnegie Hall often.