Enron at the TimeLine in Chicago To April 15 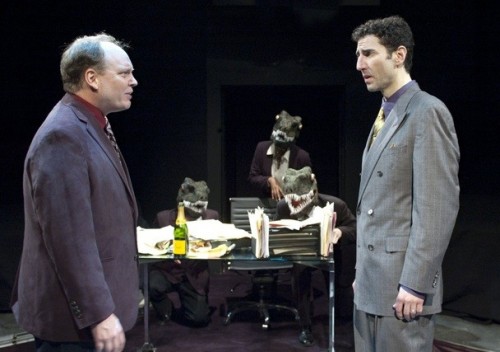 Skilling and Fastow cook up air. 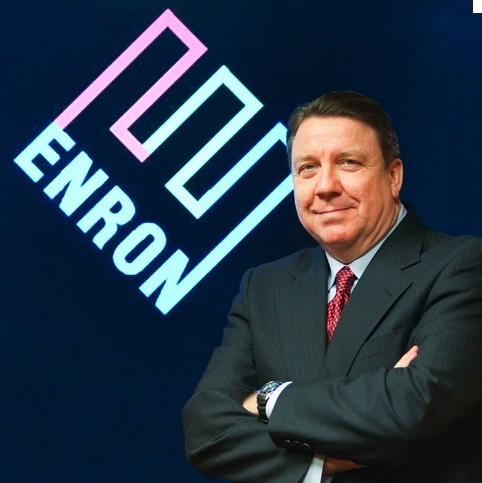 Ken Lay created Enron with the aid of God and "W". 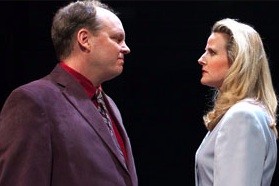 Skilling and Roe face off. 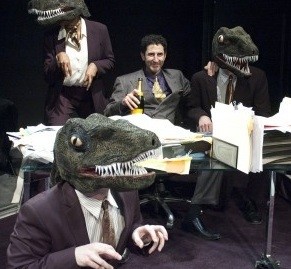 Fastow and his raptors. 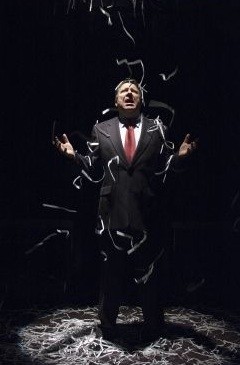 Accountants shredding could not save the company.

Real human beings cook up the schemes that are packaged then sold and traded.  In Lucy Prebble’s Enron, now on the stage at the Timeline Theater in Chicago through April 15, each of the players in the rise and fall of Enron are brought to life.

Bret Tuomi portrays Jeffrey Skilling’s awkward beginnings in a company where he counts himself as best and brightest.  Skilling cartwheels from idea to idea, some his own and others from the brilliant wimp Andrew Fastow. They are aspiring to ascend as masters of the universe.

First seducing Claudia Roe, the only Enron employee who wants to build a real power plant, Tuomi and the acerbic, ambitious Roe, created by Amy Matheny, look about as interested in each other as two neutered troglodytes.  Skilling’s beheading of Roe as a CEO prospect is done not coldly, but without affect.  All the feeling here is saved for stock price and manipulating stock analysts.

Prebble’s cleverly-crafted play and the superb direction of Rachel Rockwell, who always keeps the characters this side of caricature, make Enron not just a wakeup call to the average investor, but a fully developed portrait of people who spend their days developing new paradigms and figuring out how to assess value based only on an idea.  Money of course is just an idea, but something you can drop on your foot isn’t.

Like the wonderful film Margin Call, Prebble and the actors perfectly capture a world in which the only value and the feeling engendered is excitement over making more and more money. While you may not like these characters, in the TimeLine production, you understand them.  They are around us everywhere.  They got the multi-million dollar bonuses when the government bailed out banks.

A delicious scene depicts the accountant Arthur Andersen, portrayed by Sean Patrick Fawcett, saying that they will approve the Russian doll-like companies that nest in each other. They are made of 97% air and three percent real stuff required by law. OK if the lawyers approve. The lawyers reply that they will approve if the accountants do.  Ken Lay, who God and "W" helped to create Enron, says if the lawyers and accountants say this is legal, it’s a go.  So it’s a go.

The small stage is minimally dressed.  Various conventional and unconventional props provide a sense of this particular world: A ticker tape, TV appearances by "W" and Alan Greenspan, the California grid going down.  On stage, Raptors, Fastow’s imagined figures for his shell companies, three blind mice, images of Skilling’s young daughter counting dollars all add a worldly and then other-worldly dimension to the proceedings.

This is not a diatribe, but rather a portrait of the kind of people who get caught up in shell games forgetting rules and parameters.  The securitization of mortgages issued to people who never could have made payments is just the sort of air that some bankers were permitted to sell for profit until everything crashed.  When the crash happens, the big guys keep their bucks and average folks suffer the consequences.

At the end of Enron, Skilling asserts that he is not a villain.  Human progress is a jagged, upward-ascending line of a financial graph. Guess what, he implicitly says about his crimes against economy,  that we're in it together. When it comes to the elaborate fictions that sustain our global marketplace, we are all alike.

A huge hit in England, where it had quickly gone from the Chichester Festival Theater to the Royal Court in London, it did not appeal to New York theater critics.  While some complained that the play about smoke and mirrors was itself made of smoke and mirrors, my guess is that this compelling play hit too close to the bone in the town where most ‘air’ deals are made.  So ban it by panning it.

Prebble has created a powerful play in which real human beings are tantalized by setting up lucrative new games.  In a day and age where the average time a stock is held is twenty-two seconds, some suggest that all the derivative activity, fast trading and securitization, or bundling of securities, should be moved to Las Vegas.  A market where individuals can invest in real companies which make real product well, products needed by real people would be served by an exchange of its own.  Maybe part of the financial world should be made up of finsncial instruments you can drop on your foot.