Moby Dick a Whale of an Opera 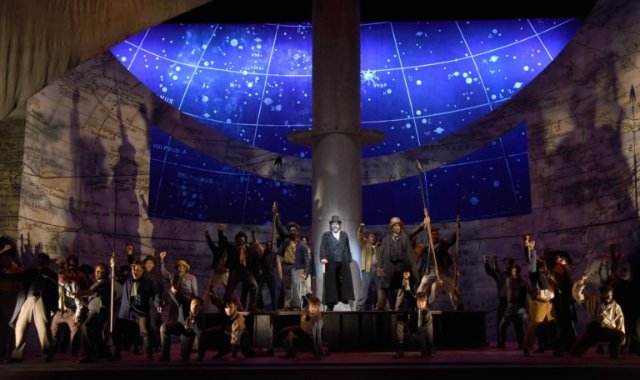 Chorus with Richard Cox as Ahab at center on the orienting set. Photo by Pat Kirk.

Herman Melville’s 19th century novel Moby-Dick stands as one of the pillars of world literature. Its testosterone-driven action exemplifies the highest order of sea faring adventure – perhaps the greatest story telling ever of a quest on the high seas. Debuting in 2010, composer Jake Heggie and librettist Gene Scheer transformed the novel into what has already become one of the most admired and successful contemporary operas in the catalogue. Opera San José extracts every bit of virtue from the opera in a remarkable production.

The central story of the work is known to most. Captain Ahab has lost a leg to a white whale and is obsessed with revenge. His relentless search for the oblivious beast takes precedence over search for men missing overboard, for the economic welfare of his crew, and for safety of the ship and its men. Embarking from Nantucket, he will captain the Pequod past Africa’s Cape of Good Hope, through the Indian Ocean, and on toward Formosa in the Pacific.

Within the canon of modern opera, Heggie’s music is among the most accessible and appealing, and it is at its best here. While it will never be confused with the melodiousness of Puccini, it resolves well and satisfies the ear in its own right. Although Moby-Dick adheres to the continuous melody mode, many striking set pieces punctuate the score. Much beauty also derives from the orchestral interludes which reflect smooth seas as well as storm with equal competence. But the most striking pieces are the many rousing choruses. They energize the stage with their vocal power and with movement that depicts the tossing of the seas and the men’s tasks.

The greater creative challenge was Scheer’s distilling Melville’s epic novel into a cohesive narrative that still retains the character of Ahab’s odyssey and the intimacy of the personal relationships. The libretto succeeds in complementing the music and effectively telling the story. If anything, a little further trim would help lower the running time, which wouldn’t hurt. Because a majority of the dialogue comes directly from Melville’s book, the vocabulary and speaking styles and rhythms of the period are retained which adds an air of authenticity.

The tormented Ahab is played with grim and dramatic determination by the imposing Richard Cox, while Justin Ryan inhabits his counterpoint, the earnest and humane Starbuck (yes – the source of the coffee shops’ name) with aplomb. Each has a good go at his arias, but their duet reflecting on their families left behind is most notable.

The best vocal performances come from the other two leads. The rookie seaman Greenhorn (Ishmael in the novel) is sung by Noah Stewart, whose clarion tenor flows like honey. Base-baritone Ashraf Sawailam provides a deep, warm vibrato in singing Queequeg, the older South Seas native harpooner. Interestingly, the pair share three wonderful and contrasting duets. One is a touching love song “My friend,” while another evolves into a double duet with Ahab and Starbuck, “I am ready to fight.”

OSJ’s depth of quality casting is impressive. Area stalwarts, baritone Eugene Brancoveanu as Stubb and tenor Mason Gates as Flask, acquit themselves as always with both fine vocal and acting performances. Newcomer to the area, soprano Jasmine Habersham gives not only wanted vocal balance as the boy Pip, but she delivers with grace and beauty. Finally, baritone Trevor Neal booms with conviction from the darkened mezzanine as the captain of another vessel seeking help from Ahab.

Much credit for the vitality of the opera goes to director Kristine McIntyre, who coordinates the artistic elements to create a strong sense of instability associated with the sea. But at least an equal star is the stunning staging of designer Erhard Rom. Backdrops of celestial charts and navigation maps create a sense of the scope of ocean sailing. Through much of the performance, a huge mast dominates the stage, surrounded by a versatile turntable that is rotated to create various props. Also impressive is the scene of rendering a whale, with a suspended carcass and large slabs of meat being extracted in an orange-lit glow.

For those who question the prudence of mounting a still new opera that has had a successful showing at nearby San Francisco Opera, have no fear. Opera San José’s Moby-Dick enthralls and deserves the respect of a highest-order production.

Moby-Dick with music by Jake Heggie and libretto by Gene Scheer is produced by Opera San José and plays at California Theatre, 345 South 1st Street, San Jose, CA through February 24, 2019.