The Pipeline by Dominique Morisseau 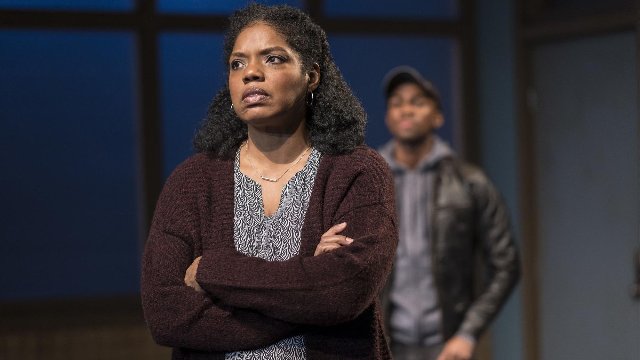 The pipeline in Dominique Morisseau’s play is the school-to-prison path followed too often by young people from disadvantaged backgrounds because of harsh school and police policies. The route is explored in Morisseau’s Pipeline, now on stage at Victory Gardens Theater in a compelling production directed by Cheryl Lynn Bruce.

Nya (Tyla Abercrumbie) teaches at a public high school. A single mother, she struggles with the problems of her bright, angry and rebellious son Omari (Matthew Elam), who already has two strikes. When he attacks a teacher at his private school (funded by his father, Nya’s ex-husband), he’s suspended and may be expelled. Nya worries that they may press charges and she won’t be able to protect him from incarceration. While Nya is concerned about her own students, the heart of the play is her own rage and her frustration about making the right choices for her son.

Meanwhile, Omari tells his girlfriend Jasmine (Aurora Real de Asua) of his fears. “I don’t know what’s comin’ for me, and I can’t be pretending like we in some fairy tale fantasy where time stops and all I need to do is sit with you in a castle and chill….” He tells her he’s leaving. She accuses him of running from his problems and he answers, “What else I’m gonna do? Stay and let ‘em take away my life? My future?”

Omari leaves but returns home later, where his mother demands that he explain his actions. Omari describes focus in the class discussion of Richard Wright’s Native Son. And the teacher “starts asking questions. What made Bigger Thomas kill that woman? What were his social limitations? What made the animal in him explode? And who he lookin’ at when he askin’ all these questions, Ma. Who he lookin’ at? …. Like I’m BiggerThomas. Like I’m pre-disposed or some shit to knowing what it’s like to be an animal.” And of course, another student videotaped the altercation and it’s now gone viral.

Nya and her ex-husband, Xavier (Mark Spates Smith), a successful executive, discuss the situation. His solution is to take Omari to live with him, with the implication that he will get Omari to shape up. “I’m not saying you don’t do your part-­?-­?-­?but I’m the man. Not you. And he needs a firmer hand,” Xavier says. (There was an audible reaction from the audience at this.)

Cheryl Lynn Bruce directs Pipeline with a sure hand, drawing a strong line from beginning to the poignant ending between mother and son. Both Abercrumbie and Elam are utterly moving and real in those roles, as is Real de Asua as Jasmine. Two side characters add flavor and texture to the story. Laurie (Janet Ulrich Brooks), is a tough teacher, who doesn’t take any shit from her students. And Ronald L. Conner as Dun, the high school security guard, tries to retain calm in a stressful environment.

Morisseau’s script is direct, bold and poetic. (Her other plays include Paradise Blue, Skeleton Crew and Sunset Baby.) In Pipeline, her use of literary references as motifs enriches the story thread. In addition to the Native Son references, Nya teaches her class about black poetry. Using projections of a Gwendolyn Brooks poem, “We Real Cool,” she demonstrates how the language looks and sounds more authentic when it’s printed by an indie press in broken graffiti style than when it’s published by a traditional publisher in a regular book font, evenly spaced and styled.