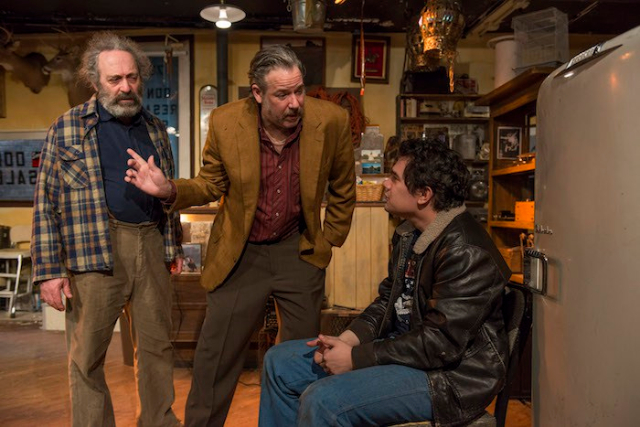 If you want to see classic Shakespeare without flying to London, you can drive up to Stratford, Ontario, to see a production of Macbeth or As You Like It this summer. But if you want to experience classic Chicago theater, get over to the corner of Broadway and Sheridan this month and climb the stairs to the scruffy home of Mary-Arrchie Theatre. There you can see their outstanding and final production of a Chicago classic, David Mamet’s American Buffalo, set in a junk shop on the north side of Chicago. You can see it the way a storefront production should be seen: sitting five feet from the stage, possibly endangered by flying spittle or stray props.

To reprise, American Buffalo is the story of one day in the life of three Chicago hustlers who try to run a home burglary to get at a rich man’s coin collection. (The buffalo nickel is an often prized version of an early 5-cent piece.) Donny (Richard Cotovsky, a founding member of Mary-Arrchie and its artistic director, is the usually calm, business-focused owner of Don’s Resale Shop. Bobby (Rudy Galvan) is his gopher, and Teach (Stephen Walker) is a neighbor, an angry, emotionally needy man. Director Carlo Lorenzo Garcia choreographs the events of the day with great skill and attention to the nuances of the Mamet text.

The three actors perform this terse Mamet script—loaded with one-word sentences, four-letter words and references to “the thing”—with such precision and perfect timing that you can believe you are watching a conversation, rather than a theater production. Cotovsky’s mien at every moment is totally focused on the other actors, his eyes vigilant and measuring, his face ready to react. Walker’s Teach is a time bomb, ready to explode at the slightest offense and absolutely certain of his own importance. (Sort of like your uncle who is always ready for an argument. Or my late father, Ernie.) Bobby is a pitiful young guy, who always needs money, probably for a habit.

And this is the final production for Mary-Arrchie because the theater is folding after 30 years at its Angel Island location at 735 W. Sheridan (735 is the address painted on the outside of the window in the junk shop’s door). Why is it final? The explanation in brief is found in Walker’s playbill bio, “Real estate developers can eat a bag of dicks.”

American Buffalo is a heist drama, a small tragedy, about three lowlifes who have dreams of something better. John Holt’s set design recreates the confined space of the resale shop filled with old typewriters, deer heads, bird cages, chandeliers, chairs hanging from the ceiling, a two-headed doll, the bottom half of a store mannequin, a Meister Brau sign and wall thermometer, and shelves full of pots and glassware tottering and ready to crash.

It may be a tragedy but it’s hilariously, viscerally funny with language that still has the power to shock. Mamet’s fast, profane dialogue spits and snarls as much as it did when it premiered 40 years ago at the Goodman Theatre. Joe Court’s sound design sets the scene with original music by Little Howlin’ Wolf, a Chicago street musician with a raw, emotive blues sound.

Gregory Mosher, who directed the first American Buffalo production here, wrote in his introduction to the 1996 Grove Press edition: “Like some bastard offspring of Oswald Spengler and Elaine May, American Buffalo popped out, full grown, as the American drama’s funniest, most vicious attack on the ethos of Big Business and the price it exacts upon the human soul.”

The block on Sheridan Road between Broadway and Pine Grove where Mary-Arrchie has been since 1986 now has an honorary street name: It’s “Honorary Richard Cotovsky Way.” Small comfort.

For a while, reviews of the Mary-Arrchie production were prohibited, a ruling inflicted by publisher Samuel French and the playwright. The theater said it would be required to ask that any online reviews be taken down. Therefore, there were no comp tickets for theater critics and no production photos. Many reviewers (this one included) did not believe the publisher had the right to prohibit reviews and would have reviewed it anyway. Apparently a Chicagoan of some status interceded with the publisher and Mamet’s agent to get the review ban lifted.

American Buffalo continues at Mary-Arrchie Theatre through March 6 at Angel Island, 735 W. Sheridan Rd., with performances at 8pm Thursday-Saturday and 7pm Sunday. Running time is just under two hours with one intermission. Tickets for $30 are on sale online or by calling 773-871-0442.