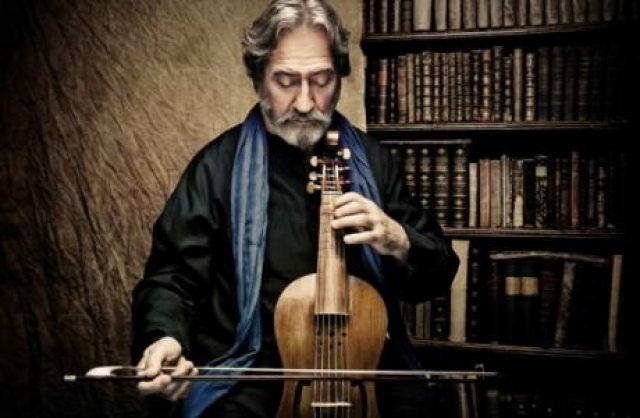 In recent years, Jordi Savall and Hespèrion XXI, his troupe of gamba players, drummers and occasional singers, have made yearly visits to Boston under the auspices of the wide-ranging Boston Early Music Festival. Their visits are always an event among fans of early music, and their concerts are usually sold out or close to it. After a half-century of gathering steam, the so-called early music movement is mainstream by now, and in Boston it has a devoted audience that turns out for groups visiting here from around the world as well as those locally rooted.

The movement is international in its interests, and the focus in northern centers where the movement first came to prominence on Bach and Handel with a dollop of Vivaldi for some of that famous Mediterranean warmth has broadened to include music by composers previously forgotten and from places far from London and Leipzig. Jordi Savall, who with his late-wife Montserrat Figueras founded Hespèrion XX – they changed It to XXI at the turn of the century – in 1974, is as responsible as anyone else for early music’s current international outlook. In their early days, the group focused on the music of the Iberian Peninsula and the Mediterranean – Hesperia to the ancient Greeks - but as the years passed, it cast a wider net, embracing music from both the European heart and its hinterlands. Among the remarkable 230 plus albums he has made with the two Hespèrions and other affiliated groups, the early albums remain among the most cherished. Indeed, Savall first came to my consciousness in 1991 - when he provided the soundtrack for the film “Tous les matins du monde,” a historically informed movie about the obscure 17th century French composer and violist Marin Marais. (Gerard Dépardieu played the composer.) It was the first CD I ever purchased and I play it still.

But his more recent explorations of music and cultures far from his Catalan base show how globalist his interests have grown. A few years ago, Savall presented a program of Irish fiddle music here, and he has explored “early music” of Spanish Colonial America. Most memorably, he presented a concert here and made a recording of the music of Istanbul that could not better express how music from one culture passes to another. Featuring music from Turkish, Greek, Armenian and Sephardic traditions – traditions among which love did not always flow, but which coexisted for a time in sophisticated Ottoman capital  - Savall demonstrated, almost like a lecture-demonstration, how melodies and rhythms were passed around to the point where their origins were subject to debate.

Not that his concerts are academic in any way – Savall and his ever-changing troupe are at heart music makers, and his concerts are good times. You might learn something, hear something new, end up thinking about the world and history differently, but you will do it while maybe tapping your foot or humming an unfamiliar melody to yourself.

Savall’s current program, based in Venetian dance music of the 16th and 17th centuries might seem like a return to his roots in Mediterranean Europe, and it is in a way. But by focusing on music from Venice, the leading entrepôt and site of artistic and cultural exchange of late Medieval and Renaissance Europe, he is still exploring the interaction between cultures that unite our worlds, if we’d only let them do so. At a moment when the globalism of the post-World War II era we’d gotten used to is under threat from both East and West, most troublingly from Washington, DC, a concert by Jordi Savall and Hespèrion XX! Is not only a musical statement, it is a political statement, one we need to hear, especially while we are tapping our foot and smiling.

The concert was divided into brief sections that featured a few pieces from different times and places. It opened, appropriately, with a trio of early 16th century Venetian dances, two of them by unknown composers, all three of them rather unsophisticated, and it moved briskly through sections devoted to increasingly complex Venetian music of later decades, music from the Elizabethan and Jacobean era (by John Dowland and Orlando Gibbons), 17th century dances from the French court, German dances (by Samuel Scheidt) and after a brief return to Venice, a set of highly rhythmic folias and canarios from Spain. A little musical tour around the continent, most of the music composed by Venetian composers or those who studied there or with someone who had studied there. And what did “study” mean in the context? That the person was there, listened, played perhaps in a band, got a few words – or maybe more - of advice from a master and then moved on.

The two outstanding sets to my ears were the ones focused on English music and the concluding folias and canarios. Whatever his connection to Venetian tradition, John Dowland stands out as a singular talent of the era. His “Lacrimae Pavan” is a famous melody, steeped in melancholy and longing. You could call Dowland the king of melancholy, which made the sprightly dance, “The King of Denmark Galliard,” that immediately followed a little bit of a shock. The Spanish set foregrounded the strong, lilting rhythms that distinguish Spanish music. And to underscore the international reach of this music that started in Venice, in a tradition that was initiated, according to the program notes, by Adrian Willaert, a Flemish composer, the first “Folia” played bore a strong resemblance to the familiar Cuban folk song, “Guantanamera.” So from Venice in 1500 to 19th century Cuba and beyond, a strain of music continues, changing and adapting from place to place and time to time.

Savall and his small band of five string players and percussionist played with alertness and presentness. They brought their knowledge of history and period style to the expression in real time of what the music tells them. In their hands this is not “olde” music, historicism, something from a museum if we use the word “museum” to mean a place of dead things. The music played was live, as live as if it had been recently composed or improvised on site. Although in that sense “contemporary,” it was not a modern sound, however. The strings were sonorous but a little sour. This music is based on simple melodies and even simpler harmonies but vibrant rhythms. The percussionist was an important element in the total effect even if his role seemed the simplest. Even with the limited string palette, this music is colorful and various. Especially the earliest music bore a resemblance to folk and rock music of the 1950s and ‘60s.

Through the entire concert, Savall was serious in demeanor, not cracking a smile even in the most raucous of dances. He cut a sober figure in his luxurious beard, now gray, and long red scarf draped over his shoulders. It came as a surprise that he waved at the audience as he walked off the stage, finally a small smile on his face. He seemed to have approved of us as much as we approved of him.

Always a popular destination, the prime party-town in Europe for centuries, Venice seems to be enjoying a vogue at the moment, at least in terms of music. Savall brought Hespèrion XXI to Cambridge while a two-week long celebration of Venetian musical culture is going on in New York City at Carnegie Hall. Titled “La Serenissima,” after the immodest term the Venetians call their watery city, and by extension themselves, “La Serenissima Republicca di Venezia” – The Most Serene Venetian Republic - it features Savall as well as other groups playing music associated with the city and its composers, including Vivaldi’s oratorio “Juditha triumphans” and Monteverdi’s masterpiece in operatic form, “l’incoronazione di Poppea.”

Of course, thanks to the Boston Early Music Festival and other local presenting organizations, we’ve heard both of those major works here in recent years. And thanks to the Early Music Festival, whose biannual weeklong festival comes again this year in June, we’ll be hearing a lot of Venetian composed or themed music. This year’s fully staged Centerpiece Opera will be the American premiere of André Campra’s “Le Carnaval de Venise,” which, in the French style, will feature dancing as much as singing. Starring such local favorites as Amanda Forsythe, Douglas Williams, Jesse Blumberg and Karina Gauvin, the opera will set the tone for the rest of the festival. Although there will be music originating from all over Europe, there will be a number of Venetian-themed programs. Béatrice Martin will play harpsichord in a concert titled “La Serennisma,” although some of the composers are French. Micrologus will give a concert that definitely promises some Venetian naughty-naughty: “Carnavalesque: Sex, Lies and …Musical Tales in 16th century Venice.” Concerto Palatino will play instrumental music from the musical chapel of the doge – he being the boss. And the Boreas Quartett Bremen will show us “Shakespeare in Love: The Golden Age of Venetian Consort Music in the English Court.” (That international thing again.) And that doesn’t count the 80-odd fringe concerts that fill the halls, churches and theaters of Boston and Cambridge during a very busy week. For more info: www.bemf.org