L'Elisir d'Amore at the Metropolitan Opera

A Swig and A Miss 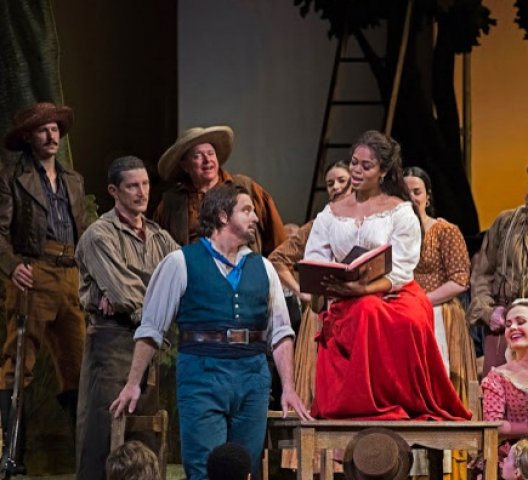 L'elisir d"amore at the Metropolitan Opera

The soprano Pretty Yende is one of the more sensational discoveries at the Metropolitan Opera this decade, wowing audiences with her sweet tone and superlative bel canto technique since making her debut in the company’s January, 2013 revival of Rossini's Le comte Ory. This month, she sings Adina in the revival of Donizetti’s L’Elisir d’Amore, a charming love story that maintains its front rank among the most popular Italian operatic comedies.

This revival of the company’s 2012 staging (like Ory it was directed by Bartlett Sher) puts Yende opposite Matthew Polenzani, the lyric tenor who sang the role of Nemorino when this production premiered six years ago. Saturday's performance, which was broadcast as part of the company's Live in HD series, still made use of the framed show curtain, which shrinks the size of the acting surface for the cameras but also forces people in the partial view sections of the house from seeing the entire set.

Polenzani began this performance singing "Quanta e bella" on a tiny bench outside the sand-colored curtain, emphasizing his outsider status in the opera's pastoral setting, His performance has gained in beauty as his voice has darkened a bit, and he remains a fine, impetuous comic actor. He summoned ravishing tone for "Una furtive lagrima" and finished the opera strong as Nemorino, with the help of a little magic grape juice, won the day and Adina’s heart.

Yende sparkled as Adina, singing this high-ranging part with an utter lack of inhibition. She seems to fit the part of this wealthy landowner well, and comes across as sprightly where other, older sopranos can see, too motherly. She also summoned enough bright tone and forte to slice cleanly through the choruses and the big Act I finale, carrying smoothly over the top. The chemistry with Polenzani was appealing throughout, and their whirlwind romance worked, buoyed by Donizetti's fizzing score.

Davide Luciano made a strong impression as the strutting Belcore, the pompous sergeant who plans to draft Nemorino into the army and win Adina for himself. Granted, he isn't much of a villain but Luciano was more than content to make him an utter creep, with a pointed performance that is especially meaningful in today’s #metoo culture. Both artists were clearly playing for the eyes of HD cameras in the first act, but their antics drew laughs all the way up in the family circle. His duet with Mr. Polenzani, "Venti scudi" was spot on.

The final important player is Dr. Dulcamara, the traveling quack who sells a bottle of cheap Bordeaux to Nemorino, convincing the gormless rube into thinking that it is the magic potion with which Tristan wooed Isolde. Mr. DArcangelo sings the role (here, reimagined by Mr. Sher as an arms dealer) with a sexy, fluid bass, adding bottom end to his ensembles and making the most of his character’s entrance aria "Uddici, o rustichi". In the second act duet with Ms. Yende (" La Nina gondoliera e il senator") it was nice to hear the lines sung full out instead of (as they are too-often "traditionally" done) croaked in a wheezy “old man” voice. No doubt Donizetti would approve.

The performance started early for a Met matinee, with conductor Domingo Hindoyan taking the podium at 12:05. This was because the relatively brief Elisir was sharing the stage with the Saturday night prerformance of Parsifal, another opera where the main character starts out as a bit of a fool but inevitably finds wisdom. In the second act of the Donizetti opera, there is actually a scene that has an amusing parallel in the later Wagner work, where a drunken Nemorino fends off the attention of the ladies of the village who have all discovered that he is a wealthy heir. Perhaps this bit of comic business inspired the second act of Wagner’s work?  (Reprinted courtesy of Superconductor).