The Revolutionists in Boca Raton 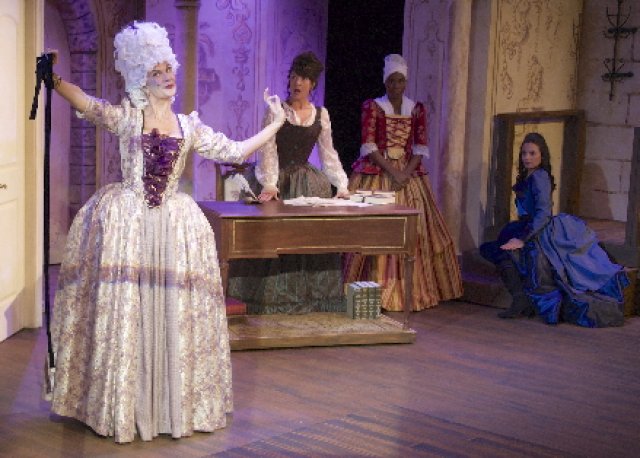 Throughout theater history, sisterhood and the scaffold might never have blended so seamlessly, compellingly and invigoratingly as in Lauren Gunderson’s excellent play The Revolutionists.

Superb performances and Matt Stabile’s sensitive, detailed and balanced direction place equal emphasis on the funny and serious aspects of The Revolutionists. It’s a crowd-pleasing theatrical treat with colorful, playful and gorgeous writing.

The production takes place in Theatre Lab’s intimate space, on a wide set designed colorfully, with contrast and detail by Michael McClain.

Without preaching, Gunderson’s piece drives home the very human need to leave behind a legacy that includes a person’s life story. This play is an empowering tale about the strength of the human spirit and the positive effects of bonding.

Gunderson’s historical play takes place during “The Reign of Terror,” (1793-1794) during the French Revolution. In many ways, it’s a serious play whose action centers around the guillotine.

The layered piece touches on many topics without becoming muddled. Themes include the fight for freedom, justice, humanity, dignity, the importance of stories, legacy and the freedom of expression.

Gunderson also brings out theater’s connection to politics and live theater as a metaphor for life. Perhaps it’s no accident that a minor character is named Jacques. That’s the same name of the character in Shakespeare’s As You Like It, who spoke the famous “All the world’s a stage,” soliloquy.

The Revolutionists exposes the hypocrisy of those dedicated to the French Revolution – one with common folks in mind.

The play never tries to impart a history lesson. Rather, the work is a cleverly-written comic confection that suggests Pirandello, particularly his masterpiece Six Characters in Search of an Author. In both plays, the lines between fiction and fact are blurred.

“I’m here for a writer,” blurts out Charlotte Corday (1768-1793), who assassinated French Revolutionary Jean-Paul Marat and went to the guillotine as a result.

Corday is a character in a piece in which playwright, activist and feminist Olympe de Gouges (1748-1793) is preparing.

Confusing? Reading the play might help, although it’s not necessary to enjoy the piece or relate to it.

During our dark days of attacks and division, different people are feeling marginalized. They might also feel traumatized from past sexual assaults. These incidents are coming to light at a furious pace, with allegations popping up regularly. Certainly a “sisterhood,” such as the kind the play’s characters form, can boost emotionally scarred individuals.

There also seems to be a palpable need in modern times to make your voice heard, to protest, in response to what is happening. If you feel that desire, watching The Revolutionists can empower you, making you feel as though you’re not alone. Consider de Gouges. At one point she declares, “We hold these truths and-the-fact-that-women-are-people to be self-evident.”

How can you not cheer, “You go girl!,” after hearing such an emboldening proclamation? Elle Woods from Legally Blonde would, no doubt, be proud.

It is virtually impossible not to cheer on de Gouges. She’s willing to fight, literally to the death, for that which she believes. The threat of dying at the guillotine hangs over her, but she presses on. This indomitable character, like her fellow “sisters,” will not go down easily without leaving her mark.

It’s a mark that can cut and penetrate deep through the arrogance and inhumanity of the extremists, Gunderson suggests.

“She is risking everything for her art,” Angelle tells Corday. “So be nice to the playwright, because she holds fiction like you hold that blade and I bet her weapon is sharper.”

Gunderson wields a pretty mighty pen herself. Like the talented playwright Tom Stoppard, she explores expansive ideas in science and art. With a Stoppardesque touch, Gunderson writes with sharp, incisive, sarcastic wit.

Just as de Gouges, the fictional playwright, advocates on behalf of women, Gunderson is doing her part to ensure women receive equal representation as writers for the stage. She is the most-produced playwright for the 2017-2018 theater season in the U.S., according to American Theatre magazine.

At just 35-years-old, Gunderson is an artist whose contributions to live theater will hopefully prove to be a boon to the art form for many years to come.

No doubt, the bold and talented Gunderson takes theater seriously. However, she also apparently enjoys having gentle fun with theatrical conventions. Theater aficionados seeing The Revolutionists will nod with laughter at Gunderson’s playful pokes. From good-natured jabs at musical theater to “a play about a playwright writing a play,” The Revolutionists is a love letter to live theater.

The light-hearted material doesn’t detract from the seriousness of the women’s situation. Rather, their use of humor conveys an unbending defiance and belief in the stand they take. They may be fearful of execution, but humor helps keep them strong and unafraid of the perpetrators of terror.

“I don’t need last words; I am of the theater,” the proud, fictional playwright proclaims. “We just go on and on. And on.”

The defiant de Gouge also says says she’d “rather watch a guillotine” than “end up with a play about a playwright writing a play.”

At another point, a prosecutor accuses her of having penned a play that amounts to a “treasonous tract…a shameful drama, poorly penned.”

She and the other women belittle the prosecutor.

In this production, that individual is an oversized puppet. His facial expression and vocal inflection doesn’t change, regardless of what the women say. The prosecutor is, in essence, a “puppet” of The Reign of Terror participants.

The quartet of talented, versatile actors have internalized their roles to the point that the characters come to vital life.

A wide-eyed, highly-expressive Niki Fridh gives equal weight to the many facets of de Gouges’ character. She nails the character’s almost uncontrollable passion, hammy persona, exasperation and perseverance. Fridh creates a strong-willed, brave and indomitable character whose love for her work is obvious.

Nicole Stoica, who plays Corday, wears a blue-grey dress, reinforcing the darkness of her character. Stoica barges into de Gouges’ study in the beginning. She conveys a forceful aggression and impulsivity you might mistaken for madness.

Candice Marie Singleton, wearing a head covering, plays Angelle, whose husband remains a slave back home. Singleton endows the character with an understated dignity but imbues her with heartbreaking passion and sorrow when necessary. Those emotions seem so real – as real as the droplets forming in her eyes when Angelle hears bad news.

For some, the play would seem to end on a tragic note. But these women die a brave death, glad that, someday, someone, somehow, will tell their story.

After all, “who are we without a story?” one of the characters asks.