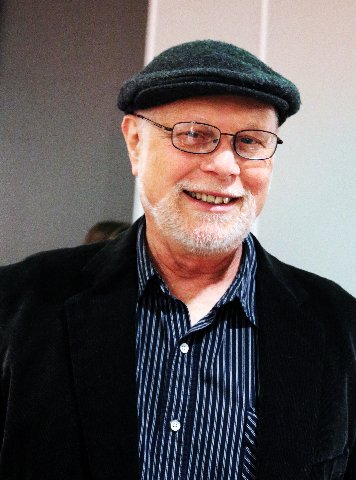 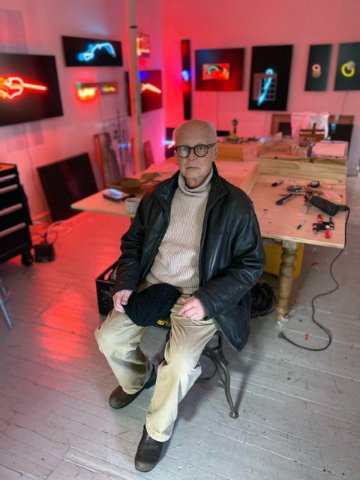 A recent studio phot by his son Josh Powell 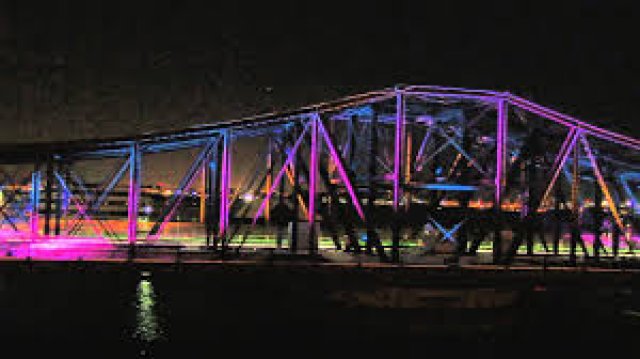 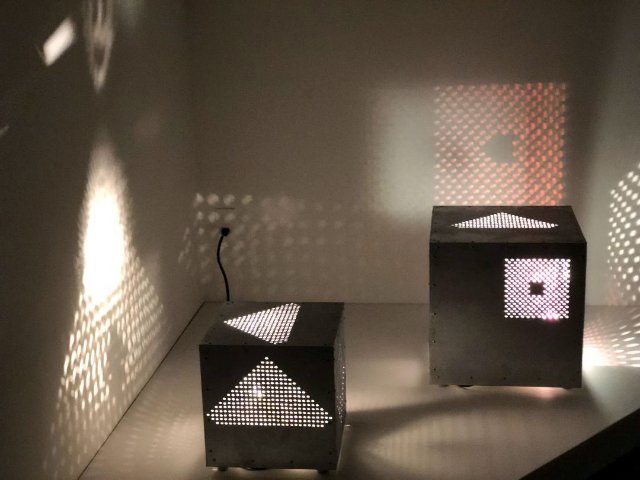 Light Robots were mobilized by collaboration between Piene and Powell. Photo by Astrid Hiemer. 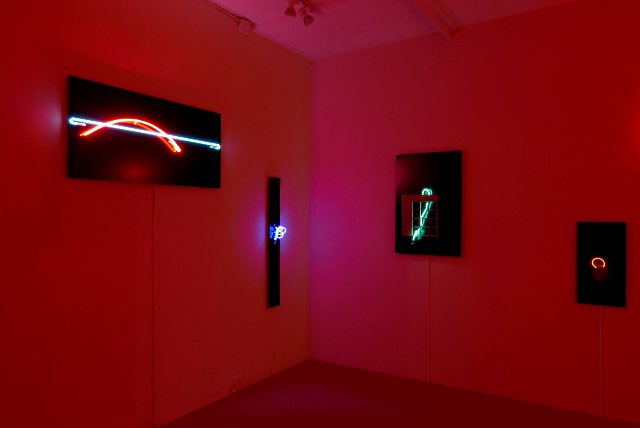 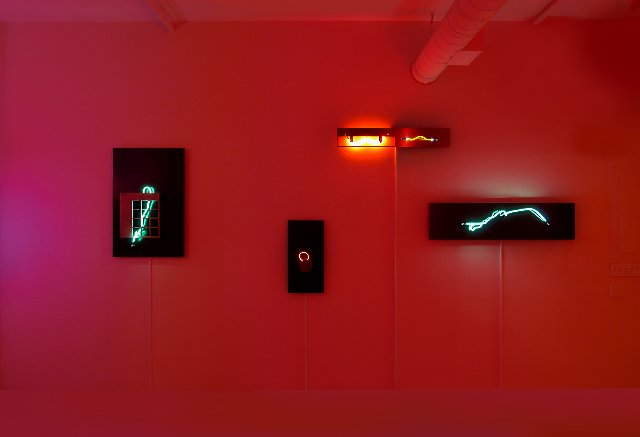 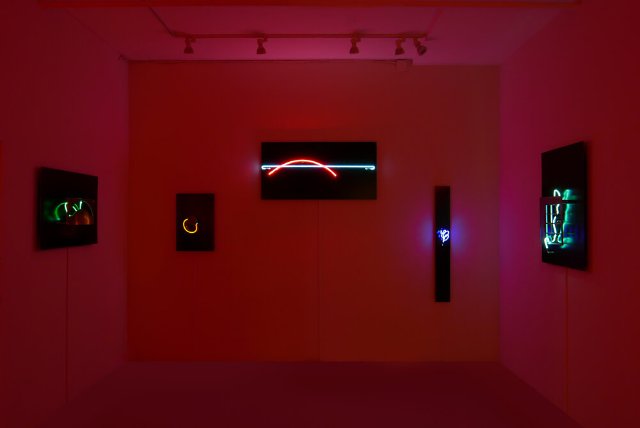 Installation on view at Yezerski gallery. 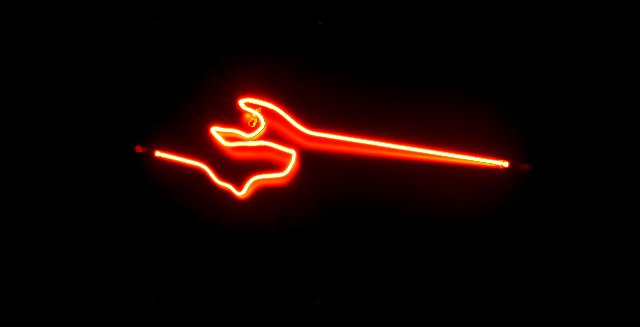 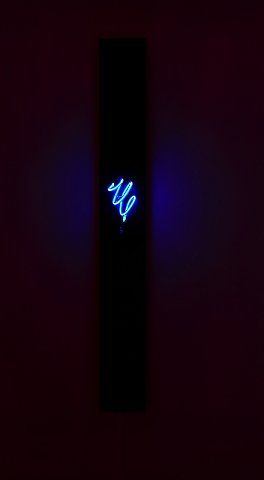 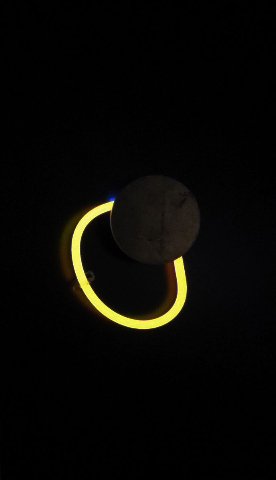 Following a long illness, at 73, John Powell died just days before an exhibition at Howard Yezerski Gallery. Including the window, office and gallery there are a dozen plus works.

“They are stunning” Yezerski commented while taking a break from preparations for the opening this weekend in Boston’s SOWA district. “The pieces are in his minimalist style but quite engaging and unique. There are quick sketches in neon elements. I met him some twenty years ago when the gallery was on Newbury Street. We have several pieces that he created as lighting for our home.”

John was my student in a seminar on contemporary sculpture at Massachusetts College of Art. In 1986 he earned a Masters of Fine Arts, 3-D. He also earned a 1989 Master of Science in Visual Studies, from Massachusetts Institute of Technology. At MIT his practice developed with a focus on art, science, and technology.

He brought to experimental art a range of skills with metal, fabrication, and technologies including electronics, computers and holography. Otto Piene, the director of the Center for Advanced Visual Studies at MIT was initially a mentor and then a collaborator. Powell became instrumental in developing Piene’s works from concept to finished pieces.

Early on Powell provided support for established artists before achieving recognition under the umbrella of Light Time in Space. Much of this entailed temporary and long term public art projects. He made masterful use of lighting to create site specific works.

In the late 1980s we spent an interesting evening viewing his illumination of a bridge near South Station. The placement of large lighting elements powered by a generator articulated and created a rhythm from structural elements. His work allowed us to experience quotidian transformed into sublime.

There was a robust physicality to the man and his hands-on proletarian approach to making high art using industrial materials and techniques. He was more of an art worker than esthete. The stunning Yezerski installation focuses on the more accessible, collectable, interior design inventiveness of his approach. There was a range from macro, the public art site specific work, to micro sconces, fixtures, maquettes and sketches with metal and neon. Aspects of light and shadow were the matrix of his creativity.

For the show that he did not get to see Powell wrote a brief artist’s statement. “My work with light as material began with sculpture. In 1974 I spent a year in Holland as the assistant to the Dutch sculptor Thijs van Kimmenade. He worked primarily in steel. His objects were distortions of real objects, bookcases, chairs, and tables surreal in a very natural unobvious way. My own work, then and now, is built up of planes, steel planes reflecting planes of light. Shape and colors were major issues for me; van Kimmenade's work was black. No color and no light came from or was shed upon his work. Holland is a small and frugal country. The streetlights went out at ten o'clock at night in 1975, the height of the energy crisis. Riding a bicycle down a one-lane road during the dark of the moon through the pitch-black countryside was a real lesson in light and shape. The concept of pools of light and volumes of space defined by light came to me as a direct outgrowth of this time in Holland.”

Our initial as well as subsequent relationship was provocative, contentious and informative. During that MASS Art seminar Powell and the others were graduate students. It was quickly apparent that they knew more about the subject than I did. John in particular seemed to delight in never missing a chance to demonstrate that. That edge persisted through years of mutual respect and all the complexities entailed when a critic is a friend of an artist.

During the seminar I deftly turned the tables and became more of a facilitator than instructor. We learned from each other in a series of remarkable individual reports. There was a wonderful Saturday exploring sculptures installed on the grounds of the DeCordova Museum. Looking back I would say that John and that class made me a better artist and critic. Ultimately, we are best teaching ourselves with a little help from our friends.

In 1994 CAVS closed its MASS Ave space and relocated to the building adjacent to the MIT Museum. There was a ceremony as friends and former fellows gathered. John had constructed a large ersatz cello. It was to be lofted from the roof by Piene and a crew. The conceptual piece was a reference to avant-garde cellist Charlotte Moorman who Piene enjoyed sending aloft.

Spectators included Astrid Hiemer, former administrative officer at CAVS, and her daughter Olivia. I photographed them as well as the event in general. That weekend fellows gathered for a party at the Carlisle home of Powell and his wife, the late book and printmaker, Meryl Brater. There I invited Astrid to my Fourth of July party at the East Boston home I had just purchased. After several years we got married in the vast back yard under an apple tree.

John and Meryl were part of our extended family of former CAVS fellows. There was an odd camaraderie. Through Piene, and before him Gyorgy Kepes, Boston/ Cambridge became the epicenter of a global network of experimental art.

Piene commuted monthly to a studio in Duesseldorf. As a founding member of Group Zero he was better known in Europe although we attended several exhibitions at Sperone Westwater Gallery in New York. In 2019 there was a stunning retrospective, Fire and Light: Otto Piene in Groton, 1983-2014, at the Fitchburg Art Museum. Several of the major pieces entailed collaboration with Powell.

Astrid Hiemer recalls that “Powell worked on Piene's Light Ballets. They go back to the 1960s and were technically quite simple: a drum, a motor, light bulbs and perforated grids would throw changing light patterns in a darkened gallery on walls and ceilings, as the drums turned. Magical, even then! In 2013 Piene started to develop Light Robots with Powell, who developed them with assistance from an  MIT lab.  By 2014, shortly before Piene's death, he had seen in the studio a first finished Light Robot as now a spinning and a mobile sculpture.”

At CAVS Astrid managed the center and numerous global projects. That included Centerbeam in 1977  at documeta 6 in Kassel, Germany. Despite creating major international projects these artists were largely strangers in their own land.

The art, science and technology of CAVS were never a part of the mainstream narrative of 20th century art in Boston. There was a one off at the MFA, Earth, Air, Fire, Water: Elements of Art, guest curated by Virginia Gunter in 1971. It included many CAVS artists. Not long after MFA director, Perry Rathbone, called to tell me of the appointment of Kenworth Moffett as contemporary curator. Subsequently the MFA and ICA had little or no interest in art, science and technology.

Many CAVS fellows live and work in the area. They contribute to the rich tapestry of advanced art. Their individual careers and accomplishments have been celebrated. But that critical mass has fallen outside the purview of curators. An exception has been George Fifield and his Boston Cyberarts events. My colleague and BFA contributor, Mark Favermann, a former CAVS fellow, has written extensively about experimental architecture, art and technology. Among Boston’s critics that’s exceptional.

In my dreams the MFA and ICA will organize a major survey of art, science and technology in Boston. Powell and peers who gather to celebrate him deserve that long overdue recognition.