Mexican Food for a Winter Night 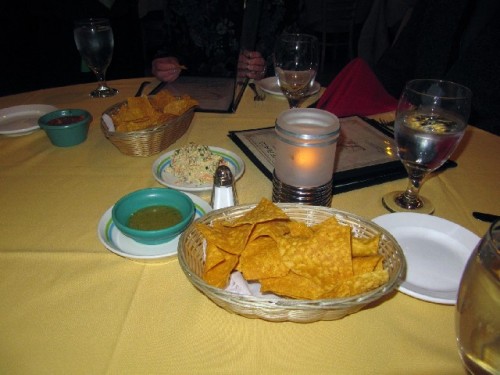 Complimentary chips and salsa for the table. 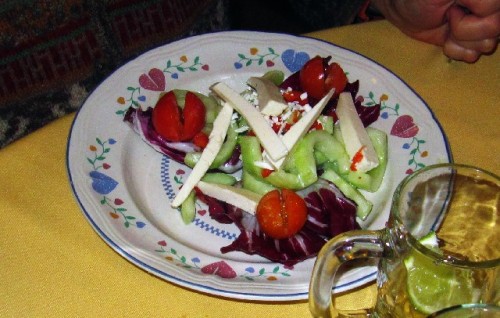 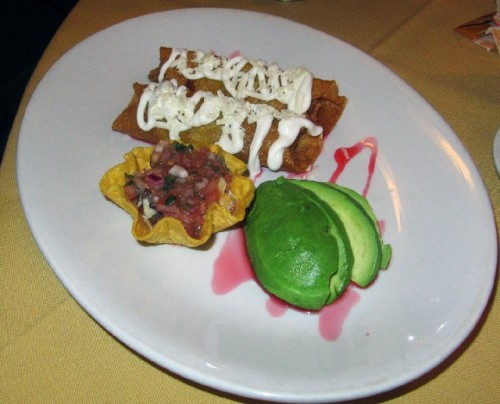 A Flautas appetizer was combined with a salad as a meal. 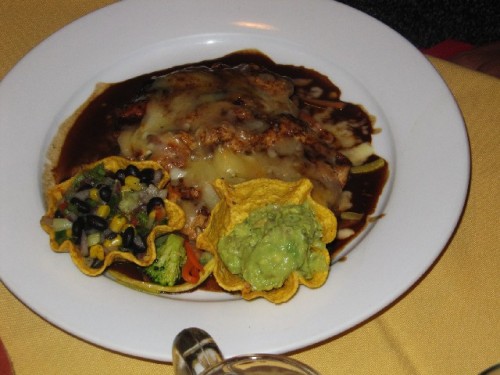 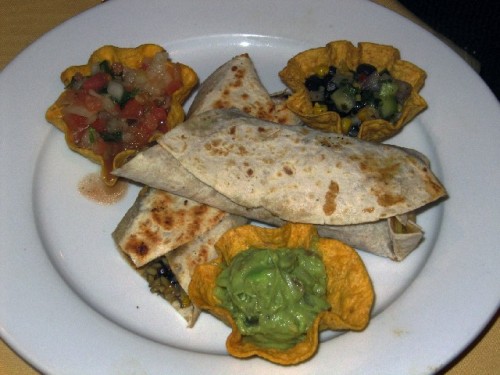 Our diners ordered both the chicken and beef burritos. 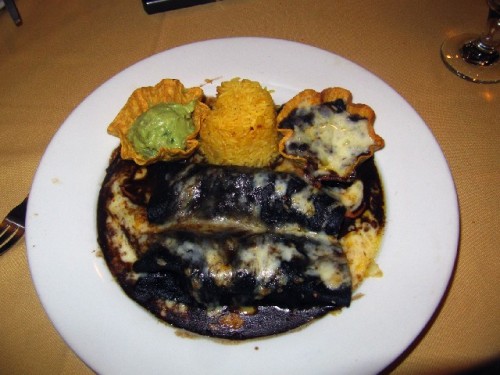 The Enchiladas Oaxaca with mole sauce may have been the best dish of the evening. 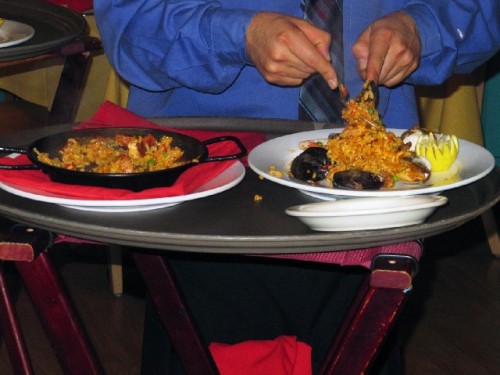 The waiter plating the Paella too far from the table. 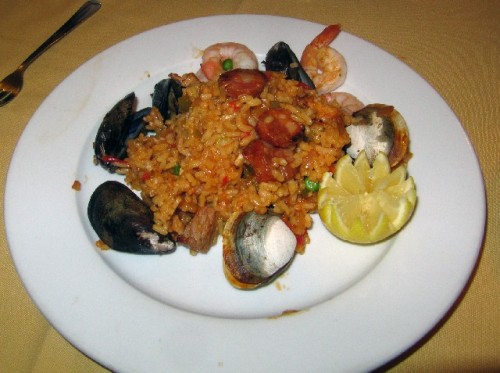 The Paella was more like scorched shellfish over Spanish rice.

On a winter Saturday night, following an opening at Mass MoCA six of us opted to dine at Coyote Flaco in Williamstown. We were able to find a table in the busy restaurant. In high season that would not be possible.

Going on line we learned that Coyote Flaco is a chain and one of seven venues also in Connecticut and New York. For the most part the food is more authentic than generic. As Mexican restaurants go it is one of the best in the region but not up to the standards for heat and flavor that one finds closer to the Rio Grande.

Actually we have visited the restaurant on a number of occasions. This time the Pit Bulls were joined by their Sweetiepies and another couple. It was an opportunity to explore the range of the menu and the overall service and ambiance on a busy Saturday night.

The service was efficient and attentive. Several of us enjoyed the House Margaritas. They nicely set the mood for an enjoyable evening. Factoring price, food and ambiance we all agreed that we would return.

With the caveat that you get what you pay for. The affordable prices reflected adequate but not remarkable food.

We started with complementary chips and salsa. Plus an unusual complimentary plate of a Mexican version of chicken salad to be served with the chips as an appetizer. Our chips and salsa were refilled as we waited for the dinners to arrive.

What follows are comments of the diners.

The Ensalada Maya ($5.00) was combined with an appetizer Flauta de Pollo ($9) for a meal. “The salad was really good and the flautas were light and crispy.”

“I enjoyed my meal it was a Coyote Burrito ($14). The menu described rice and black beans with cheese. I expected more filling. I would definitely come back to the restaurant but probably order something else.”

“I had the beef burrito and other than the fact that I was overstuffed with chips and salsa it was fine. The margarita was excellent. So overall I was very satisfied. We would definitely return and I would order that dish again.”

“I enjoyed the mole sauce over blue corn tortillas. (Enchiladas Oaxaca $14) The guacamole was served on the side as was the salsa. It was wonderful and I would order it again. I love guacamole and this was not too spicy which I liked.”

Pancho “I did the Pollo Oaxaqueno ($16) grilled chicken with mole sauce. The food was commensurate with the price. I would order it again but it was not outstanding. There was something missing in the mole. I cheated by adding the salsa (from the chips) to spice it up. But it needed more accent.” He was reminded that a mole is a chocolate sauce and not intended to be spicy. “What I am talking about is taste. The mole was too shy. If it is intended to be chocolate then give it to me. Don’t be shy.”

Cisco “The Paella was a special ($20) for the day. It was a mistake to order a Spanish dish in a Mexican restaurant. There was no saffron, an admittedly expensive ingredient. But without saffron it is not paella. The rice was red indicating a tomato base and it lacked texture. The too few clams and muscles were grilled, tasteless and dry. The portion overall was small for the price and lacked ingredients. Also the waiter transferred the paella from pan to plate too far from the table to be properly observed. The presentation is an important aspect of the dining experience. Overall, the paella was a disaster and I should have ordered from the regular menu. In the past I have much enjoyed their enchiladas but I wanted to try something different.”