Fear and Misery in the Third Reich 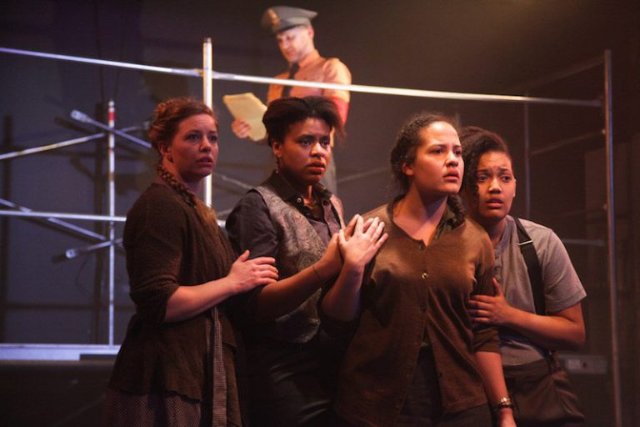 Fear and Misery in the Third Reich can be described as Bertolt Brecht’s ghost arriving to warn us about the United States of Donald Trump turning into a fascist dictatorship. The play, now being staged by Haven Theatre, is a series of 18 loosely related scenes illustrating the progression of the German dictatorship from Breslau 1933 to Hamburg 1938. The play is sometimes gripping, sometimes terrifying, sometimes yawn-inducing.

Skillfully directed by Josh Sobel, the 10 actors portray dozens of different characters who are in various stages of fear, hunger, terror and resistance about Hitler’s government. One delightfully contemporary element about the production is its multicultural cast, which has a dark-haired, dark-eyed actor playing the character referred to as “the blue-eyed German,” and female actors playing male parts. I suspect Brecht would have enjoyed these casting choices.

The yawn-inducing factor is mainly due to the play’s length. Announced as 2:45, it ran just over three hours, including one intermission, on opening night. That is surely one hour too long and at least a half hour should be cut from the production to whittle it down to 2:30.

Three of the most compelling scenes are “The Jewish Wife,” “In Search of Justice” and “The Informer.”

In the first, Alys Dickerson plays a wife frantically preparing to leave Frankfurt for Amsterdam and making phone calls to friends and relatives to let them know. In the justice scene, a judge (Amanda De La Guardia) tries to sort out if or how a Jewish jeweler’s shop was burglarized by three S.A. men. (The S.A. was the paramilitary wing of the Nazi party.) Her frustration increases as she gets little help from various participants.

In “The Informer,” two parents (Alexis Randolph and Niko Kourtis), whose son is in the Hitler Youth, become more and more terrified as they wonder what they might have said that he would report to his troop leader.

Some of the lines suggest characters’ fears and delusions about their situations.

“I notice she didn’t say ‘Heil Hitler’ any too loud either.”

“In the long run, they can’t hold us intellectuals down too long….”

“It’s no concern of ours. We’re Lutheran.”

During the final scene, actors toss up a flurry of small leaflets with the message, “Say No to Fascism.” with pleas from Human Rights Watch, Black Lives Matter and Sister Song on the back.

Actors stand on the perimeter of the stage area as the primary action proceeds in the center. Sometimes several different scenes take place on stage at one time. Fear and Misery is performed on an open rectangular stage (scenic design by Yu Shibagaki), surrounded by audience members seated in six or eight different seating areas and pits. (The bench seats are particularly uncomfortable for such a long production.)

Original music is by Jeffrey Levin with sound design by Sarah D. Espinoza. Lighting is by Claire Chrzan, The costumes, in a muted gray/ green/brown color palette, are by Izumi Inaba.

Fear and Misery in the Third Reich is an imperfect production but I suspect it will improve during its run. (And some judicious cuts will help.) It’s worth your time to see this rarely performed play by Brecht, a Marxist who left Germany just after Hitler took power in 1933. After WWII ended, he returned and lived in East Germany for the rest of his life. His most frequently performed plays are Mother Courage and Her Children, The Threepenny Opera, The Caucasian Chalk Circle and The Good Person of Szechwan. My favorite Brecht play is The Resistible Rise of Arturo Ui, which had a terrific staging by Trap Door last March. Prop Thtr produced The Last Days of the Commune in October.

Haven Theatre continues its staging of Fear and Misery in the Third Reich through March 11 at the Den Theatre’s newest space, the Janet Bookspan Theatre, 1331 N. Milwaukee Ave. Tickets are $18 for performances Thursday-Sunday.