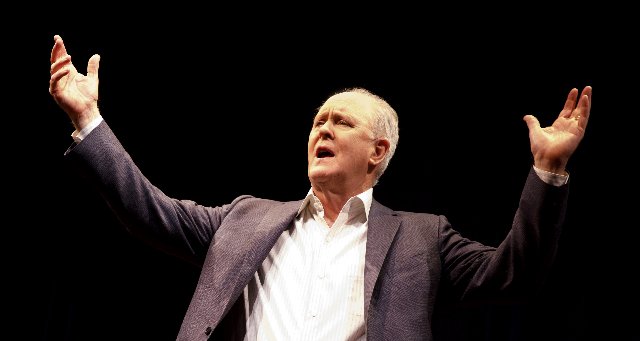 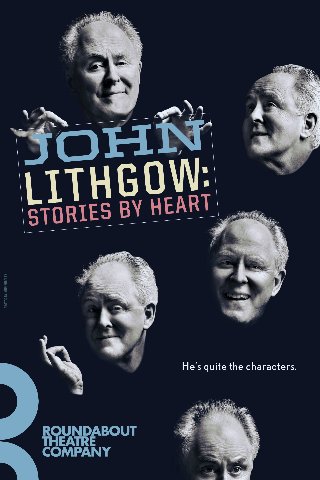 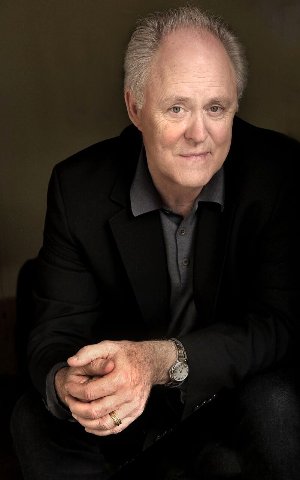 John Lithgow, the much loved 72 year old actor is the toast of Broadway . Given his four decades long award-winning Film and TV appearances  –  6 Tonys, six Emmys, two Golden Globes, Four Grammys, and two Academy Award nominations for The World According To Garp (1982) and Terms of Endearment (1983) –  he can  walk across the stage and be greeted with a tsunami of applause. That's happening every night at Broadway’s American Airlines Theatre where he is performing his one man show Stories By Heart through March 25.

The ever-charming Lithgow presents a couple of classical short stories, both taken from Tellers of Tales a 1939 anthology edited by W. Somerset Maugham, the best way he knows how by acting them out. In Haircut (1925), a two character tale written by Ring Lardner (1885-1933), Lithgow plays an extremely talkative barber giving a haircut, with a cascade of small town gossip, to a near-silent customer. In Uncle Fred Flits By (1935), a rollicking British story by P.G. Wodehouse (1881-1975), the versatile actor gets to impersonate, British accents and all, a slew of   idiosyncratic characters.

An earlier one act version of Stories By Heart was performed at Lincoln Center in 2008. Since then, in between countless other engagements, Lithgow has honed these stories. Prior to this Broadway production he has performed these stories in 35 American cities, an experience, as he tells us during personal asides, which allowed him to visit cities, most of which he never thought of visiting.

Each story, nearly a century old, was first read to Lithgow and his two brothers and one sister by their show biz father some sixty plus years ago when they were growing up.  As Lithgow relates, it is these same stories which he read to his father who had recently undergone a life-saving operation. More than a half century later he recalls an act that miraculously restored his father’s will to live. For me and many other avid readers, whether being introduced or reintroduced to Ring Lardner and P.G. Wodehouse, Lithgow’s performance will have us searching the shelves of local libraries and bookstores, or contacting Amazon, to follow up on this actor’s literary gift. In this respect Lithgow’s performance is educational.

The most demanding, and least enjoyable of the two stories being performed is Haircut. The lack of any real action and few truly suspenseful events to keep our eyes moving and our minds invigorated, coupled with a torrential raining of words is a strain on our ears. What does keep any interest that we might have is watching Lithgow’s exacting pantomime of an old fashioned haircut, as he relates the story of various towns’ denizens to his customer. Lithgow, brilliantly mimes every physical hair-cutting and face shaving movement and possible instrument sound. He does this without the use any props like scissors, combs, brushes or sprays.  Most enjoyable in this presentation, in fact I actually waited for it to appear again and again, are his joy-triggering, high pitched, long-drawn out giggles.  They occur intermittently throughout this monologue. Despite getting a full blast of Lardner’s satirical style, Haircut is a lot better read than theatrically said.

It is P.G. Wodehouse’s story – one of the most widely read humorists of the 20th century – Uncle Fred Flits By, the second of the two stories presented, which elicits cascades of laughter. Hopping about John Lee Beatty’s sparse set, a chair, an end table a glass of water and a book, a lithe and energetic Lithgow gets to inhabit a panoply (some ten or so) of zany characters in an even zanier story.

The two main characters of the story are Pongo Twistleton and his aristocratic uncle, Lord Ickenham. His outrageous behavior growing by leaps and bounds in the most unexpected ways, has us in stitches. It is the reading of this very story, as Lithgow tells us before he embarks on its performance, that brought his father back to life. This wonderful story allowed us to leave the theater amidst gales of laughter and tons of good feelings.