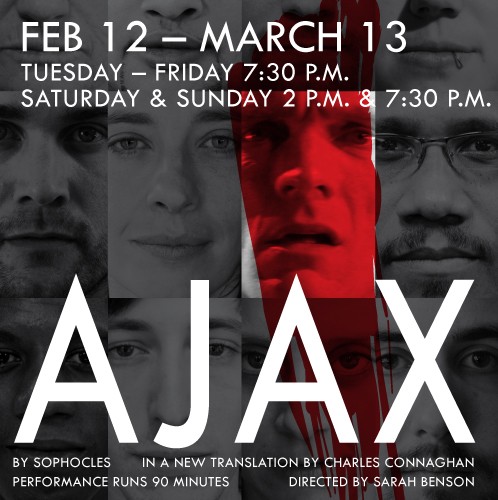 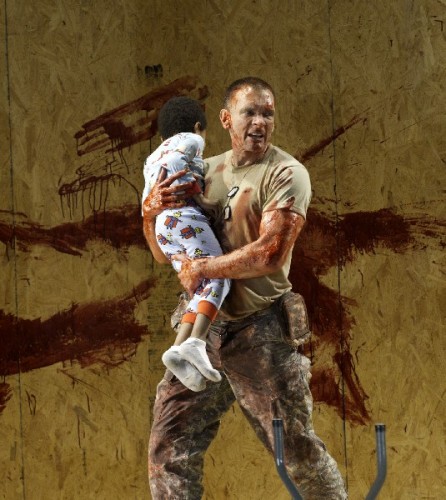 Harris and Goldfeld as Ajax and his son 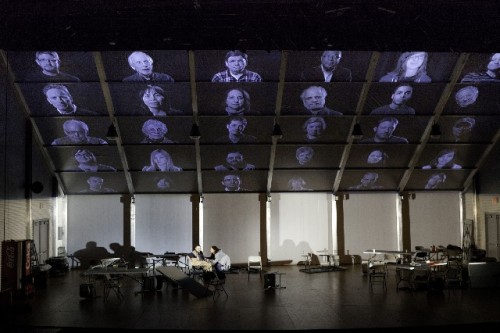 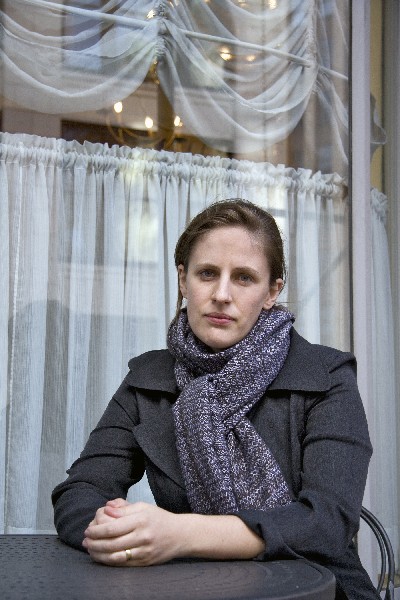 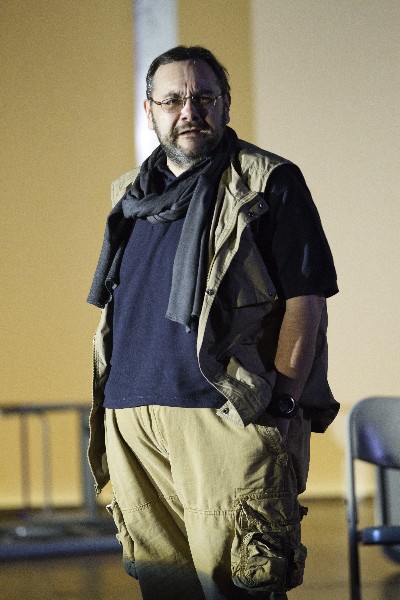 Remo Airaldi as the Chorus Leader

In a Classical sense, Sophocles' work can either resonate or just dully thud with audiences 2500 years after it was written. The formality of Greek tragedy can be off-putting especially if the first exposure to it is in a less than creative high school classroom. The contemporized version of Ajax at the American Repertory Theatre is a soulful theatrical experience in strategic human discourse. This production is about how a warrior/soldier deals with the inhumanity of war and focuses upon war's personal scars on the individual soldier. Specifically, this Ajax deals poignantly with the hero as every flawed man. What is most human about this play is its exploration of war's utter inhumanity.

Integrating technology (multiple screen video projections) and social networking themes (the actual community as the Greek Chorus), Director Sarah Benson has made this Ajax a fascinating, can't take your eyes off theatrical experience. The Greek Chorus not only adds to the narrative, colors it, nuances it and shares its humanity, but it literally and conceptually speaks directly to us and about us. This is juxtaposed with actors in contemporary dress-- both in civilian mufti and military fatigues, thus underscoring the contemporary nature of the themes and motives of the play. Iraq and Afghanistan are not far from our thoughts. This production is an achievement in exploration of art and history as well as the use contemporary and ancient tools.

At the beginning of the play, Ajax is enraged because Achilles' armor was awarded to Odysseus rather than him. In revenge, Ajax vows to kill the Greek leaders who disgraced him. Before he can enact his revenge, he is tricked by the Goddess Athena into believing that the sheep and cattle that were taken by the Achaeans as spoil are the Greek leaders. He slaughters some of them, and takes the others back to his home to torture. This includes a ram which he believes to be his main rival, Odysseus.

Ajax (played by a passionately frustrated by Brent Jones) realizes what he has done and is in agony over his actions. He is upset that Athena fooled him and feels paranoid that other Greek warriors are laughing at him. Ajax considers taking his life due to shame. His wife, Tecumessa (played ironically by Linda Powell the actual daughter of General Colin Powell), pleads for him not to leave her and her child unprotected. Ajax then gives his young and innocent son his shield. Ajax leaves the house saying that he is going out to purify himself and bury the sword given to him by Hector. Teucer, Ajax’s brother, arrives in the Greek camp to taunting from his fellow soldiers.

Calchas warns that Ajax should not be allowed to leave his tent until the end of the day or he will die. Teucer sends a messenger to Ajax’s campsite with word of Calchas’ prophesy. Tecmessa and soldiers try to track him down, but they are too late. Ajax had indeed buried the sword, but has left the blade sticking out of the ground and has impaled himself upon it.

The Ajax here is quite different than the one in Homer's Iliad. In the Iliad, Ajax is the true hero--fearless, reliable, feared, respected, and a pragmatic leader. In Sophocles' play, this Ajax becomes so enraged by his shame of not winning the armor, that he becomes irrationally violent and no longer respected in the way he was in the Iliad. Ajax killing himself is a product of the shame he felt towards his actions. Due to the values of the culture regarding shame, Ajax had no other choice but to kill himself. Here, using Ajax as the human model, Sophocles is presenting the various sides and aspects of man both severely tragic as well as quite basically human. In Ajax, Sophocles deals with the heart, mind and ultimately the body of the soldier.

Unlike in most Greek tragedies, where action and death are only reported, Sophocles allows us to hear the speech Ajax gives onstage immediately before his suicide in which he calls for vengeance against the sons of Atreus--Menelaus and Agamemnon and the whole Greek army. Ajax also wishes for the first to find his body to be Teucer, so that he is not found by an enemy and his body left without a proper burial. Tecmessa is the first to discover Ajax  with Teucer arriving shortly after. He orders that Ajax's young son Eurysaces be brought to him so that he will be safe from Ajax’s foes. But Menelaus appears on the scene and orders the body not to be moved.

The last part of the play deals with the dispute over what to do with Ajax's body. His brother Teucer wants to honorably bury him despite the demands of Menelaus and Agamemnon that the corpse not be buried. Odysseus, although previously Ajax's enemy, intervenes and persuades them to allow Ajax a proper funeral. He points out that even enemies deserve respect in death, if they were noble. The play ends with Teucer making arrangements for the burial. Out of respect for Ajax, Odysseus does not take part in the burial. All of this is underscored by this production's strategically used technology of the Greek Chorus, the community comments, which allows an accessibility to the play that is at once brilliant and somehow individually connected.

The cast is solid and quite strong. Each actor seems part of a consistent production whole. It includes a particularly sensitive Remo Airaldi (Cabaret, Endgame, Romance, The Seagull, over sixty productions at A.R.T.) as Chorus Leader, Kaaron Briscoe (Polly X in Trojan Barbie at A.R.T.) as Athena, Nathan Darrow (Paternity, off Broadway; Much Ado about Nothing at Berkeley Rep; Who’s Afraid of Virginia Woolf and Taking Sides at Actors’ Theatre of Louisville) as Teucer, Thomas Derrah (R. Buckminster Fuller, Cabaret, Endgame, 120 productions at A.R.T.) as Agamemnon, Brent Harris (Dido and Aeneas at the A.R.T., Scar in the national tour of The Lion King; leading roles in many of the top regional theaters in the country, including Present Laughter, Much Ado About Nothing, Dr. Faustus, The Royal Family at Oregon Shakespeare Festival) as Ajax, Ron Cephas Jones (The Tempest, As You Like It with The Bridge Project, member of The LAByrinth Project) as Odysseus, James Joseph O’Neil (Present Laughter on Broadway and Huntington Theatre; Look Back in Anger at CSC; King Lear at Baltimore Center Stage) as Menelaus, Linda Powell (Elena in Uncle Vanya at A.R.T.; On Golden Pond and Wilder, Wilder, Wilder on Broadway), as Tecmessa, and A.R.T. Institute actor Nick Crandall as the Messenger.

Director Sarah Benson has been the Artistic Director of Soho Rep since 2007. Her New York credits include the New York premiere of Sarah Kane’s Blasted at Soho Rep for which she received an OBIE award and Drama Desk nomination, and the New York premiere of Polly Stenham’s That Face at Manhattan Theater Club. She has also directed projects for the O’Neill Theater Center and New York Stage & Film. She co-curated the PRELUDE Festival at the Martin E. Segal Theatre Center for two seasons. â€¨Ms. Benson moved to New York from London on a Fulbright Scholarship for Theater Direction and has made it her home.

Sarah Benson's vision for this play works on so many levels. This creative use of technology of the Greek Chorus/Community is at once a major character in this dramatic interpretation as well as an all embracing environmental aspect of the set. This production works literally out of the box to create an accessible portal to Greek tragedy demonstrating that what was thought and written then is relevant, poignant and provocative now.