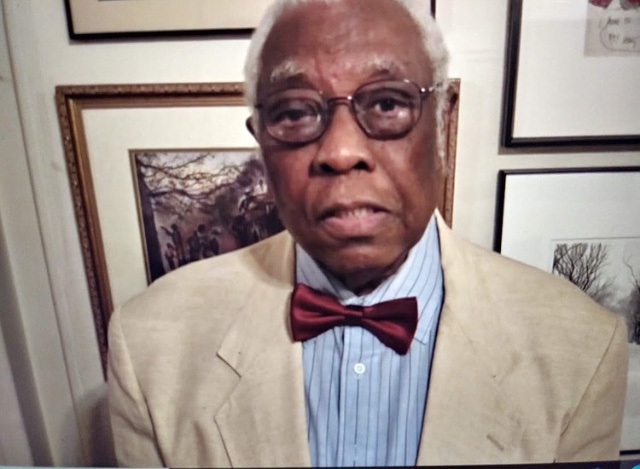 Theater royalty recognizing theater, television and movie royalty was the fantastic vibe when the New Federal Theatre recently celebrated its Golden 50th Anniversary and successfully operating from 1970 to 2020 and of course, it will keep on keepin’ on! It was a celebration fit for a king and it was for a king, Mr. Woodie King Jr., founder of New Federal Theatre and a man I love to call Mr. Theatre. Today New Federal Theatre is as vital as it was 50 years ago and it continues its mission to give people of color and women the opportunity to create and have their voices heard on stage and to work behind the scenes.

The marvelous celebration was a virtual and elegant event! It was beautifully hosted by DeWanda Wise and Alano Miller. The vibe of syncopated delight began as one could see individual floor lights on a one-person stage; then you saw golden tap shoes worn by tap dancer extraordinaire, Omar Edwards, who, dressed in a gold tuxedo, dazzled the viewers with stunning dance moves as he acknowledged in grand fashion New Federal’s 50 years. As one listened to the fantastic tap sounds which were feverishly fast, production shots and playbill covers flashed on the screen. Now you can imagine that there would be no way to show all the productions that New Federal has done and you would be correct. But Edwards was the introduction, the middle and the graceful finale to this extraordinary evening and each time he took to that intimate stage and proclaimed New Federal’s 50 years, viewers got to glimpse more of the production shots, playbill covers and just get a taste of the countless actors who got their start at New Federal and went on to achieve their dreams of stardom. Actors who appreciated the foundation that they received at New Federal and always were willing to come back to the stage, come back home and perform.

The honorees for the evening are treasures of our creative world. Douglass Turner Ward, co-founder of the Negro Ensemble Company, received a Lifetime Achievement Award. He was presented this honor by Joyce Sylvester, who recalled being his protégé in learning how to direct plays and be in them. Ward’s son Douglas P. Ward accepted the honor on his father’s behalf and stated his father’s gratitude for this honor.

The next person to receive a Lifetime Achievement Award was Ed Pitt, associate producer at New Federal Theatre. Pitt was honored to be acknowledged and to be a friend of Woodie’s. “I’ve been thrilled to go through these 50 years as your friend and partner,” Pitt expressed. There was a magnificent performance of Langston Hughes’ “The Weary Blues” done by Joseph L. Edwards.

New Federal Theatre Chairman of the Board of Directors James De Young spoke about the way Woodie got the New Federal Theatre project started and his mission “to get minorities and women on stage and in backstage positions.” Ron Himes of the St. Louis Black Repertory Company Theatre was honored with a Lifetime Achievement Award and was presented his award by Stephen McKinley Henderson. Himes addressing Woodie said, “You have been an inspiration to me. I’m honored to be here and to celebrate with you the theater you founded when I was in high school.”

Elaine Graham presented the Lifetime Achievement Award for Outstanding Performance & TV to S. Epatha Merkerson. Merkerson explained that when she got started she worked with Woodie King Jr. Expressing her gratitude, she said, “I do appreciate this, thank you for allowing me to grow and continually thinking of me. I’m 68 and I owe the New Federal Theatre for helping me to get to this point. Woodie continues to give artists the opportunity to hone their craft.”

Opera singer Kevin Maynor performed a song that Paul Robeson had done, performing as Robeson on his 75th birthday. John Rankin, associate director of performance programming for the All-Stars Project and Gabrielle Kurlander, CEO of the All-Stars Project spoke of New Federal Theatre, which has a theater home in the Castillo Theatre on 42nd Street. “All Stars and Castillo Theatre are proud of the collaboration with the New Federal Theatre…we couldn’t get where we are without the people who were knocking down doors for us,” Rankin remarked.

Cliff Frazier received a Lifetime Achievement Award for training generations of African American filmmakers—more than 3,500. Frazier explained, “My life has been committed to trying to make a difference. I’ve trained in motion pictures, TV and media skills.”

Michael Dinwiddie presented a Lifetime Achievement Award to Beth Turner, playwright, educator and publisher of Black Masks, a newsletter which recognizes excellence in Black Theater and has been doing so for 37 years. Turner humbly thanked Woodie for believing in her vision for a Black newsletter, producing her six plays and getting her to direct productions. She also thanked her family and the writers, correspondents and guest editors, including Dinwiddie, who have worked with her through the years.

Playwright Richard Wesley presented director Oz Scott with a Lifetime Achievement Award for his theater and television work. Scott’s first big play was Ntozake Shange’s “For Colored Girls Who Have Considered Suicide When the Rainbow Is Enuf” and his television shows have included “Hill Street Blues,” “Everybody Hates Chris,” “Black-ish,” “Being Mary Jane” and “Fame.” Scott recalled, “New Federal Theatre was a safe space. ‘For Colored Girls…’ started in a bar, then I got Woodie to see it and Woodie took it to the next level. New Federal Theatre allows us to create. I may be doing television, but I’m not done with theater yet.” As a tribute to Scott, three actress performed monologues from “For Colored Girls….” Maya Carter did the Lady in Yellow, Patrice Johnson Chevannes played Lady in Purple, and Trazana Beverly performed as the Lady in Orange.

Ted Lange, friend of Lifetime Achievement Award recipient Glynn Turman for 48 years, said, “He makes me proud of being an actor.” Turman said, “Woodie, you don’t know how much you’ve meant to me as an artist, friend and confident. This award means so much.”

Phylicia Rashad was presented with a Lifetime Achievement Award by her younger sister, beloved actress and director Debbie Allen. “You light a path for all of us to follow, from your work on Broadway—‘A Raisin in the Sun,’ other theater works and your tv career. Enjoy this moment; there are many more to come.” Rashad, referring to New Federal Theatre, said, “It has always been a place to go and create and do theater. We knew we would rub elbows with the best. Thank you Woodie for your tenacity, grit and your pure intentions that there should be theater for the community.”

Debbie Blackwell Cook sang an inspiring version of “How Great Thou Art,” as more playbill covers flashed. Thanking Woodie, Cook said, “So many stars have come through you. I love you my godfather of theater—Woodie King Jr., how great thou art.”

Woodie King, looking as dapper as ever, shared, “There was this passion, this love for Black people and Black art and we combined it. It’s been good and we’ve won every award you can imagine. We’re here and we intend to stay here.” The entire board of directors showed up on the screen to salute New Federal Theatre’s 50 years and toasted with a glass of champagne. Edwards ended the evening with the same sense of style and grace he started the gala with.