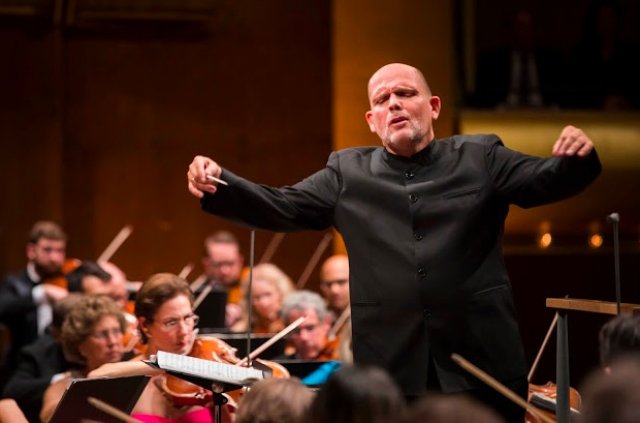 When Jaap van Zweden was announced as the new music director of the Philharmonic, he was seen by pundits and punters alike as a firm, conservative voice designed to return America's oldest orchestra to its role as guardian of the standard European repertory of the 19th and 20th centuries. This week, he confirms that hope with a performance of Act I of Wagner's Die Walküre. However, the program opens with the New York premiere of Dark Waves, a masterful 2007 composition from Pulitzer Prize-winning composer John Luther Adams.

Adams has become familiar to New Yorkers through Become Ocean, the work that won him the Pulitzer in 2014. He is in no way a Wagnerian. However his sprawling, slow-moving soundscapes for large orchestra owe a certain debt to the Bayreuth composer--each features a long development of a single musical seed, much as Das Rheingold blossoms from a single E flat major chord. Dark Waves used electronic pulses under the orchestration to increase that feeling of timelessness, as if that opera's initial contrabass pedal had been stretched to a good twelve minutes.The ghost of Anton Bruckner haunts Adams' short string figurations: tiny, repetitive, maddening arpeggios that start in the basses and move up the scale before launching the whole orchestra into the wave of sound. The pieces are small in size but when they all move together the effect is like a gravel landslide, landing with considerable force and weight. At the two climaxes of the work, a complete row of all twelve tones rings out, bursting from the surge of sound and overwhelming the listener. That effect was not so much disturbing as it was purely immersive.

Van Zweden is at present completing his first recorded Ring for the Naxos label. Here, he brought his Siegfried, the tenor Simon O'Neill to play Siegmund, that character's ill-starred father. Unfortunately for O'Neill, these two parts, while both written for the heroic tenor voice, are anything but interchangeable. His hard-edged, slightly nasal sound wore out its welcome quickly. Although he had plenty of volume, and hit the appropriate big moments with gusto, this role requires a warmer and more burnished approach.

The saving grace of this performance was the Sieglinde of soprano Heidi Melton. Melton, who also recorded this part opposite Stuart Skelton on Mr. van Zweden's Naxos recording sounded completely comfortable with her dramatic arc. Sieglinde goes from abused housewife to a full of re-ignited Wagnerian sexuality, finally not caring that the guy she has fallen for happens to be her long-lost twin brother. Melton went from nightmare to ecstasy in a little over an hour, and took the audience with her.

To the right of the conductor, bass John Relyea seemed a little at sea as the aforementioned husband. His dark tone, firm round voice and generally pleasing bass was a little flawed, lacking the last low notes needed to make this character sound truly menacing. It didn't help that the singer had little to do in the second half of the evening, and just sat passively next to the conductor as O'Neill made off with his "wife." (To be fair, at this point in the story, Hunding has succumbed to a drugged nightcap.)  Perhaps it would've been better to let him exit quietly from the stage.

The conductor whipped up furious opening storm from the Philharmonic, who sounded like they were having fun playing this piece. The brass roared. The timpani thundered. And then the players hit the long middle of this act, playing music that hadn't been programmed at the orchestra since 1985. The languors of this score seemed a little stilted and formal as if the players were not quite sure of their feet. However, the performance gained in confidence and power as the act rolled forward, climaxing in a brilliant explosion of sound as the two lovers ran off into the spring night. (Reprinted with permission from Superconductor).