The Flick at Steppenwolf in Chicago 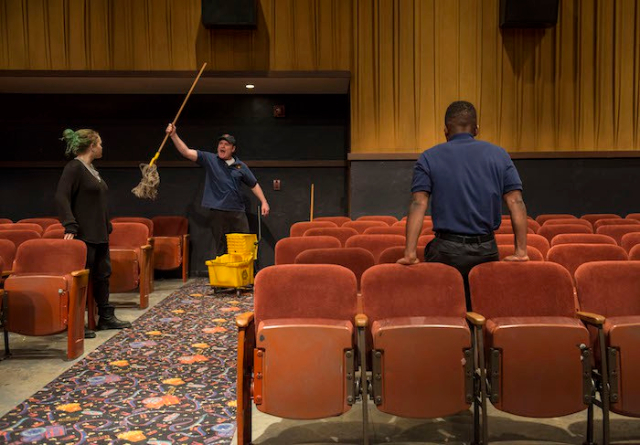 The movie theatre is about to close in The Flick. Photos by Michael Brosilow. 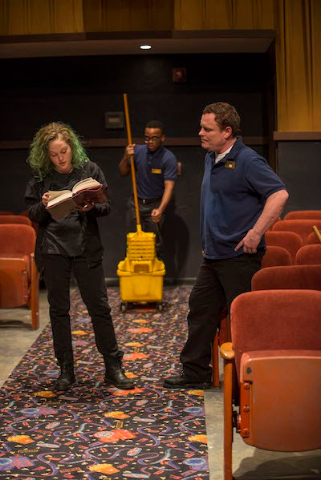 Annie Baker’s Pulitzer-winning script for The Flick, newly opened at Steppenwolf Theatre, gives us a chance to get to know three people, underpaid workers in a movie theater in Worcester County, Massachusetts. Their story of the minimum-wage economy could as easily have been told of low-wage, no-future workers in the food, home goods or electronics big-box stores we have all visited.

But setting the story in a rundown movie theater—where film projection is about to give way to digital—gives the story an extra layer of movie-geek charm.

Sam (the fine veteran Chicago actor Danny McCarthy), a 30-something who lives in his parents’ attic, and Avery (Travis Turner), a new African-American employee who has a full ride at Clark University, spend a lot of time sweeping up popcorn and unsavory trash in the theater after the movie. In the process, as conversations naturally flow, they discover each other’s cinema obsessions. They argue about whether there have been any great American movies in the last 10 years. (Avery says no.) Sam keeps challenging Avery, who excels at a cinema version of “six degrees of Kevin Bacon.” (“Richard Pryor and Angelina Jolie.”) And sometimes their talk is punctuated by long silences, as conversations sometimes are.

Rose (Caroline Neff), the projectionist, wears shapeless dark clothes, green hair and no makeup. But Sam, despite being jealous about being passed over for the projectionist job, has a crush on Rose. We learn why Avery is averse to Facebook; his mother reconnected with an old boyfriend there and left Avery’s college professor father.

The naturalistic conversations and interactions among those three characters carry us through the two long acts, when not much happens dramatically, but a great deal happens to the characters. The conversations seem to be aimless but they slowly brew into dramatic scenes of unrequited love, friendship and betrayal.

Playwright Baker has a knack for dialogue that is dead-on realistic. And Dexter Bullard’s careful direction of the three excellent actors and their mutual interpretation of the script build a thoughtful mood to a conclusion that leaves you wondering about the futures of the three characters.

Jack Magaw’s set design replicates the set used at the Barrow Street Theatre in New York, where I saw the play last fall. The audience views the play from the perspective of the screen and our view includes the shabby red velvet seats of the small theater and the windows into the projection booth above. Rob Milburn and Michael Bodeen provide original music and sound design, which includes the opening Bernard Hermann prelude to the 1958 film, The Naked and the Dead, and the six-minute long opening credit sequence music of The Wild Ones.

The Flick is a film for cinemaphiles as well as for theater-lovers. Besides the six-degrees-of-movie-characters game, Sam and Avery argue about what makes a great film. Avery is obsessed with the need to retain actual film projection rather than succumbing to the easier, cheaper digital equipment. In one scene, he and Sam review the letter Avery is writing to the businessman who’s buying the movie theater. His impassioned plea for retaining film projection includes this description, which convinced me that Annie Baker is a movie geek too.

“Film can express things that computers never will. Film is a series of photographs separated by split seconds of darkness. Film is light and shadow and it is the light and shadow that were there on the day you shot the film. Digital movies…are really just millions of tiny dots.”

Kudos to the Steppenwolf team for including Julian Antos, technical director at the Music Box Theatre, as film projection consultant. They also feature an essay, “5 Things You Need to Know About Film,” in the playbill.

They also provide an online essay on “runtime and the use of silence” in The Flick.

The Flick has a history of annoying playgoers. When the play premiered in 2013 at Playwrights Horizons, a well-regarded off-Broadway house in Manhattan, some subscribers were infuriated and threatened to cancel their subscriptions. And when I saw it at the Barrow Street Theatre in the Village last fall, a noticeable number of seats were empty after intermission. The Steppenwolf performance I attended was made up mainly of professional theatergoers, Jeff Committee members and press. No one left at intermission.

My advice? Be patient and adjust to the pace through the early scenes. You’ll settle into the mood of The Flick and the lives of Sam, Rose and Avery. It isn’t David Mamet. And that’s ok.

The Flick continues at Steppenwolf Theatre, 1650 N. Halsted St. through May 8 with performances Tuesday through Sunday. Running time is 3 hours, 10 minutes with one intermission. Tickets are $20-89 with a limited number of $20 tickets available at 11am on performance days and half-price rush tickets available an hour before the show. Buy tickets at the box office or online or call 312-335-1650.