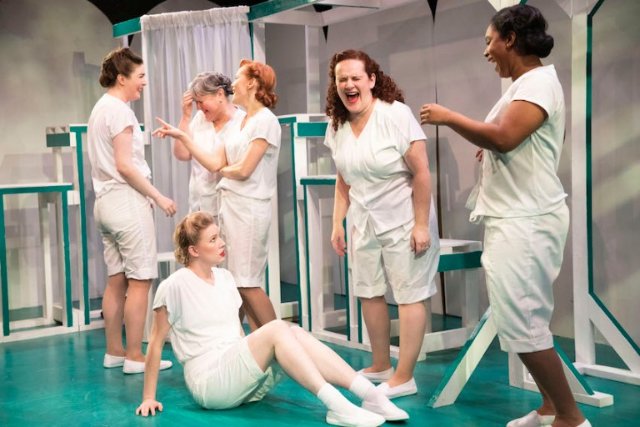 Trap Door Theatre’s latest production is the enchantingly titled Lipstick Lobotomy by playwright Krista Knight, directed by Kate Hendrickson. It’s a half-true, half-imagined story of friendship between John F. Kennedy’s younger sister Rosemary (Abby Blankenship) and the playwright’s great aunt Ginny (Ann Sonneville), both patients in an elite mental institution, the kind of place where wealthy families could stow away disabled family members. Set in 1941, it’s also a lesson in the horrific history of medical science and mental illness. The world premiere production is a sensitive look at peculiar psychomedicine and treatment of women 80 years ago.

The program has a “trigger warning advisory,” alerting you that the show contains moments of “extreme medical violence.” This was the era when the medical field believed that electroshock therapy and radical brain surgery could help a patient become comfortable and able to live with depression and other mental illnesses. The results were often different and Lipstick Lobotomy dramatizes those differences.

A flock of female mental patients, dressed in white tops, shorts and shoes, is engaged in physical exercise therapy as Ginny arrives at the Institute for Living. She’s 34, almost divorced and there by her own choice to take advantage of the latest treatments in medical science. She desperately wants to be happy and is eager to take advantage of electroshock therapy and to be first in line for the new prefrontal lobotomy surgery. (“It can actually pluck madness from the mind!” she says.)

Rosemary is 23, varying from giddy happiness to destructive behavior. “I’m retarded,” she tells Ginny when they meet. She’s there not by her own choice but because her father, Joseph Kennedy, wants to protect the political futures of his sons Joe Jr. and John. (The oldest son, Joe Jr., becomes a bomber pilot and is killed in action in 1944 over England.) Rosemary has her own health aide, Dotty (Emily Lotspeich), hired by her father to ensure she takes part in all the therapies and completes her arithmetic lessons. (Rosemary protests the arithmetic is too hard and besides she will never need it because she can always hire someone to do it for her.)

Rosemary loves the glamour of motion picture magazines and Ginny reads them with her. We do meet Joe Jr. (Michael Mejia) and Jack (Kirk Osgood) when they bring Rosemary back from a brief vacation. Ginny’s brother Stuart (Dennis Bisto) warns her of the dangers of the prefrontal lobotomy surgery. Ginny’s mother visits occasionally and Rosemary’s mother, Rose Kennedy, visits—impatiently. Ann James plays both mothers. In one visit, Ginny’s mother informs her of a bizarre family reason for her emotional difficulties.

Throughout the play, the patients engage in therapy scenes, identified by actors two-stepping in with signs announcing Opera Therapy, Steam Therapy, Abdominal Therapy, Dancing Therapy or Makeup Therapy (patients apply cosmetics to each other). The worst is the ghastly Smile Therapy, in which patients parade around wearing strap masks with garish painted-on smiles.

Ginny, eager to be happy, undergoes shock therapy administered by Dick (Michael Mejia), a young intern who has a crush on Ginny. That’s hard to watch, but you may need to turn away when the renowned Dr. Walter Jackson Freeman II (Kirk Osgood) performs the first lobotomy on Rosemary, wide awake and singing “God Bless America.” (Her father paid for Dr. Freeman’s visit, but Rosemary objected. “When is anything going to be my decision?”)

Lipstick Lobotomy is inventively staged and choreographed on Trap Door’s small stage. Set design is by Jacqueline Frole with lighting by Richard Norwood and sound by Mike Mozzocca. Rachel Sypniewski is responsible for costumes.

Krista Knight’s script is based primarily on 35 journals dating from 1924 to 1961 by several of her relatives, including her great-aunt Virginia Harrison Hamann. Her sources include Ken Kesey’s novel One Flew Over the Cuckoo’s Nest and its 1975 film adaptation, directed by Milos Forman, in which Jack Nicholson memorably undergoes a lobotomy. That film featured Louise Fletcher as the tyrannical Nurse Ratched; her performance won an Oscar for best actress.

To be fair, I should add the electroshock therapy has been refined and is considered a standard therapy today.

Lipstick Lobotomy continues at Trap Door Theatre, 1650 W. Cortland, through March 21. Tickets are $20-$25 with two-for-one tickets on Thursdays. Performances are Thursday-Saturday. Running time is 90 minutes with no intermission