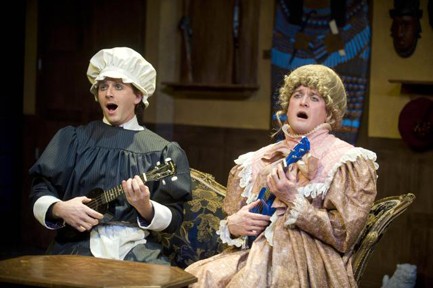 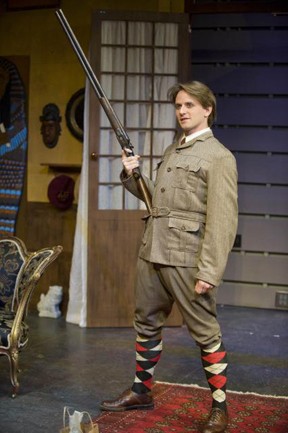 The man of the house wasn’t all that manly. 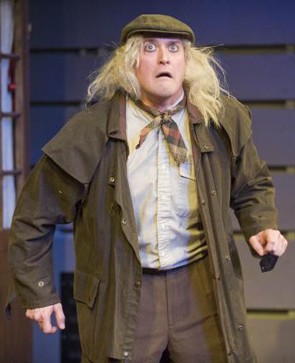 The handyman had a wooden leg in every sense.

In what has become a tradition Shakespeare & Company is getting us out of the house and into its intimate Elayne P. Bernstein Theatre during the dead of winter.

On a chilly night, what a nightmare to negotiate its muddy, mushy driveway, we sloshed on to enjoy a piping hot performance that was just fun, fun, fun. Oh goody goody gum drops.

While not exactly a hearth or roaring fire patrons huddled about the bar knocking down libations, before, in the middle, and after the performance of  a Cult Classic, the campy, draggy, over the top, Charles Ludlam, silly billy, absurdly ridiculous farce The Mystery of Irma Vep.

After an intense and rough week I was surely budding, but passed on the exotic absinthe cocktails, and settled for a beer. Everyone seemed intrigued that the bar was offering the once banned and taboo evil green intoxicant. Absinthe makes the heart grow fonder and the absinthe minded professor were phrases bouncing about the merry gathering in the lobby.

This was one evening when intermission, and just getting out of the house, may  have been a whole lot more entertaining than the show itself which was, dare I state this, a bit of a drag.

Yes it is amusing to see men in dresses. Or can be. Think of those Harvard undergrads with gobs of lipstick and padded bras cavorting about in the annual musicals of the Hasty Pudding Club.

On every level this was a terrific production that should have been presented more outrageously. S&Co’s print ads only quote the New York Times with the single word “Masterpiece.” Well, maybe, kindah, sortah, oh what the heck. We assume that's a quote from a vintage New York production. Tellingly, in print there are no pull out quotes from local scribes. Although you might find a couple if you trapse to their website.

The show starts with a lot of snap, crackle and pop. There was jolting sound and light that signified a dark, ominous evening in a crumbling, ersatz Victorian home, just off the heath, where evil and mayhem lurk and lumber about. There were some 35 costume changes hippity hopping from one gender to another.

There is a plot, sort of, I guess. As much as there ever is in farce. Vep is considered the best of the scads of plays that Ludlam created before he went to an early grave. From which perhaps he will, like the undead Irma Vep,  bounce back one day for an encore. Now that would, indeed, be a “masterpiece.”

I found this work, however skillfully and vigorously staged, numbingly pedestrian. As a colleague, Larry Murray, observed not quite camp and over the top enough. In his view a gay play dumbed down for a straight audience. Well, after all, this is Lenox not P’Town or Cherry Lane.  I agree. This should have been played heaps broader. Get the pun? Or something like that. Whatall or whatever.

After fifteen minutes you got the drift and settled in for what, at least for me, proved to be a long evening. But, as I mentioned, it had been a rough week. Perhaps I was not in the mood to let go and swing with it. To be fair and honest the audience appeared to be having a ball. There were tons of laughs. But for me it was an evening of watching paint dry.

There were brilliant tid bits. Like the absolutely inspired scene when the ladies whipped out ukuleles for a gonzo duet with a riff on the dueling banjos of the film “Deliverance.” Yes there were terrific moments but did they connect to sustain us through two hours?

Don’t get me wrong the actors, McCabe and Winkles were just terrific. McCabe skipping about as the ditzy dame Lady Enid Hillcrest was just a hoot. There was nothing remotely feminine about Winkles as the bitchy maid Jane Twisen who adored the late mistress, Lady Vep, or so it seems. Jane despises the master’s new mistress Lady Enid. We never for a moment lost sight of the fact that Winkles was a guy in a dress. Which, actually, was why it was kindah funny.

If it was a bit tough to swallow Winkles as a chick with attitude it was more challenging to accept him as a macho, swaggering Lord Edgar Hillcrest. His first entrance on stage was hysterical as he dragged along the carcass of a wolf he had just shot. The slightly built Winkles had the delicate features of Jane but not the heft to flesh out the manly, adventurous, outdoorsy, Egyptologist and explorer Lord Hillcrest.

Part of the issue for me was that too much of the staging and acting of Vep reminded me of their productions of Hound of the Baskervilles and Tom Stoppard’s The Real Inspector Hound. Too much samo samo. Audiences, it should be duly noted, just love those productions. The Stoppard play will be brought back this summer for a run in the Founders Theatre.

The second act, in an Egyptian tomb, don’t ask, was a relief. It got us out of that cliché of a Victorian house on a dark and windy night. It was just exotic enough to be diverting. But after an amusing interlude it was presto changeo and we were back at the manse.

By then the rag taggle handy man with a wooden leg that keeps popping off, Nicodemus, was morphing into a werewolf. In the third act the ghost of Irma Vep was skulking about and the two actors were changing characters and costumes at an insanely frantic pace.

By the end of two hours they wound up all the loose ends. Well, that was the intention. And we went home having been somewhat amused. Sigh.

Thank you, thank you, thank you Shakespeare & Company for dragging us, literally, out of the house on an otherwise grim, winter night. If you are feeling stuck in a rut give it a whirl. So, you got something better to do?