We ART Together - A Malaysian Arts Festival 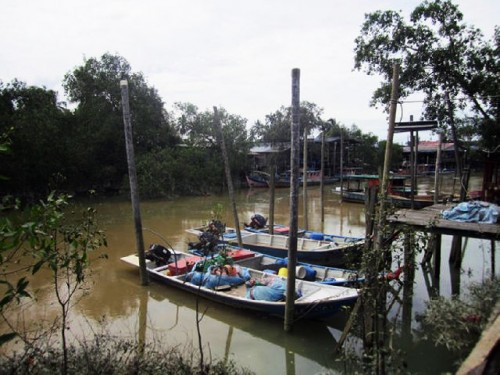 Sasaran, a fishing village in the province of Selangor, Malaysia. All photos submitted by Ellen Schon. 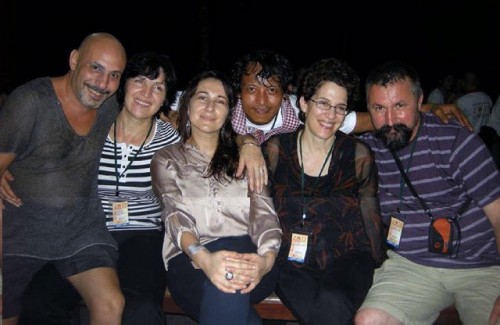 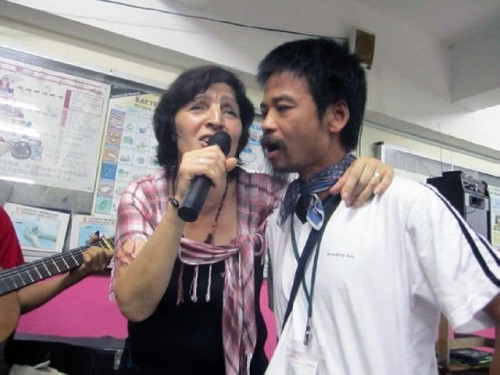 Traditional songs during the first evening, Ludmilla and Truc. 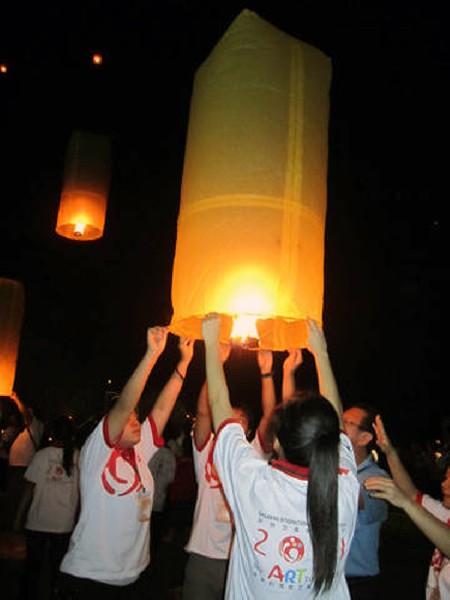 A lantern lift off. 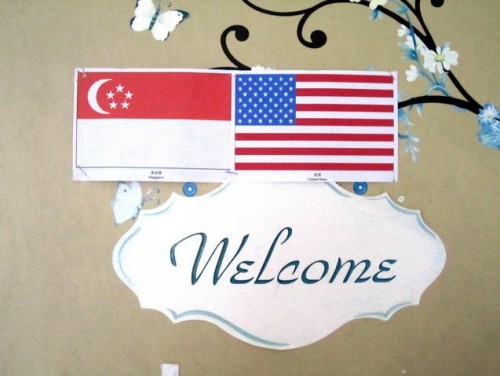 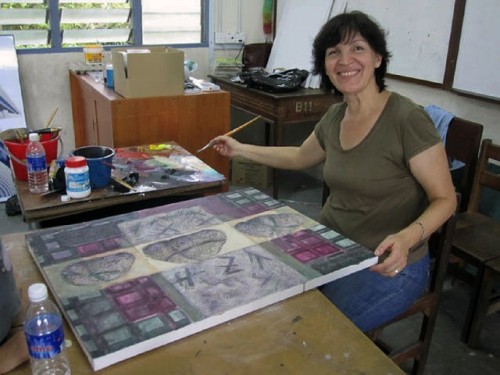 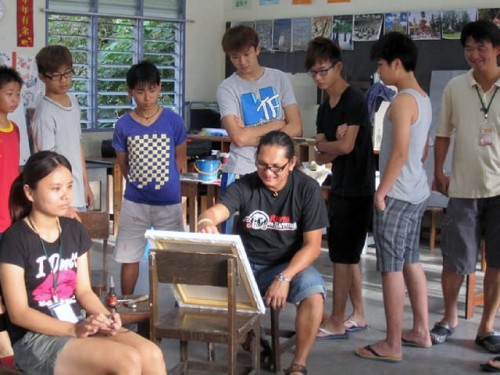 Salvador Ching, Philippines; and there was often a crowd observing. 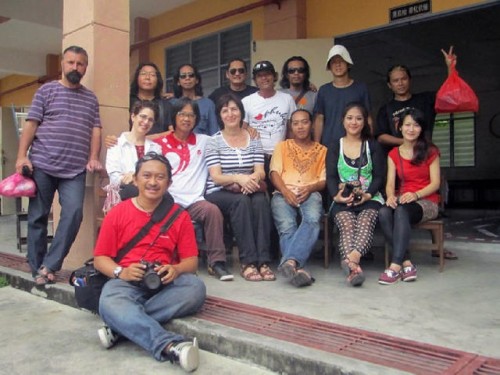 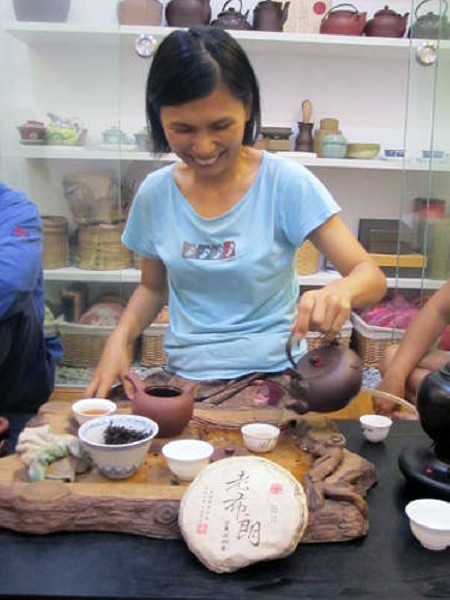 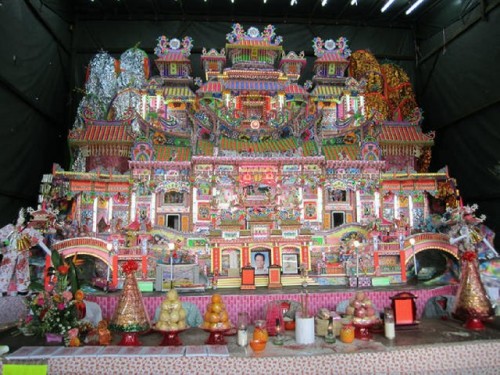 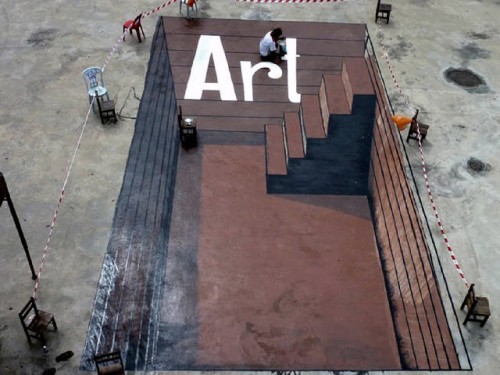 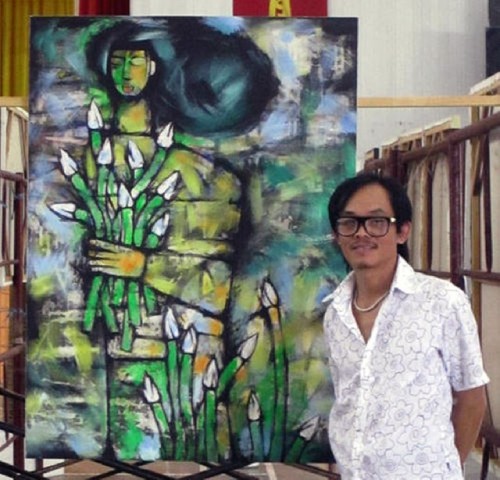 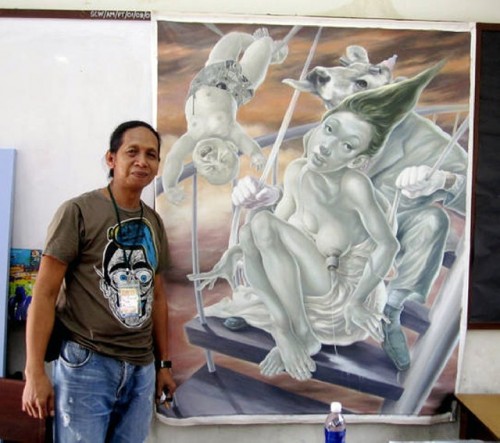 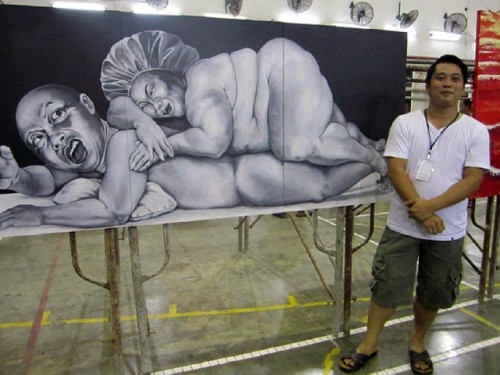 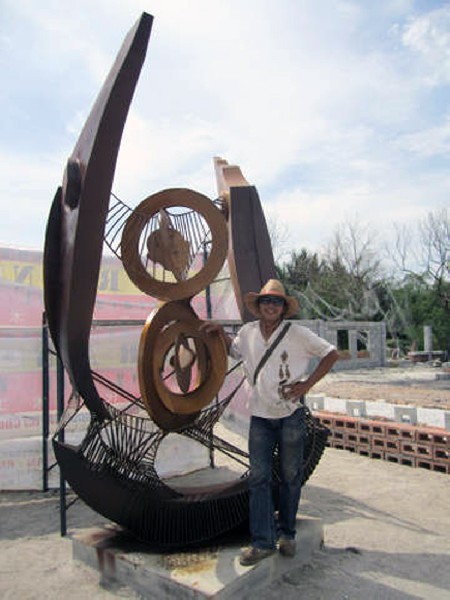 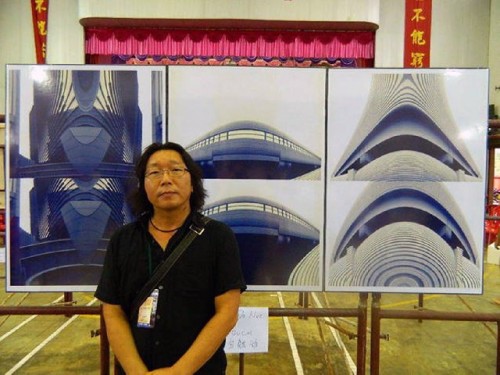 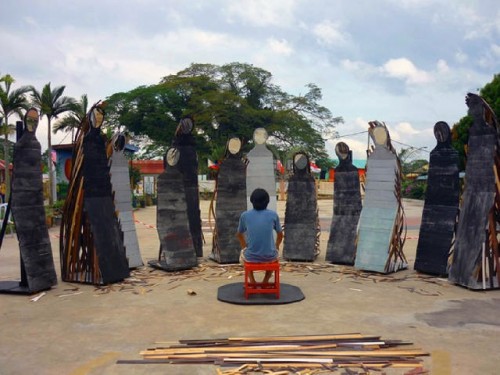 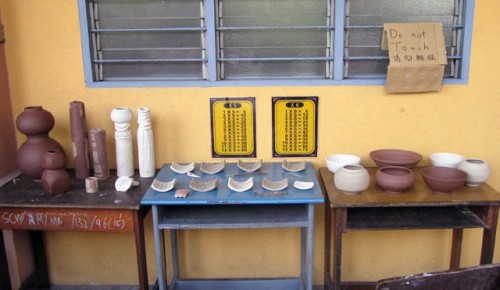 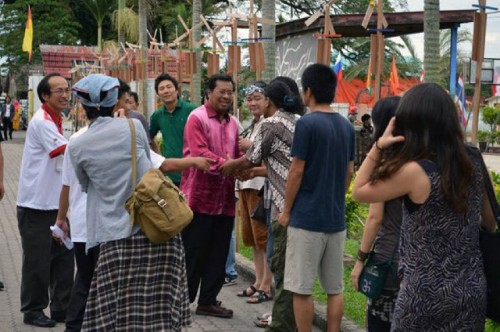 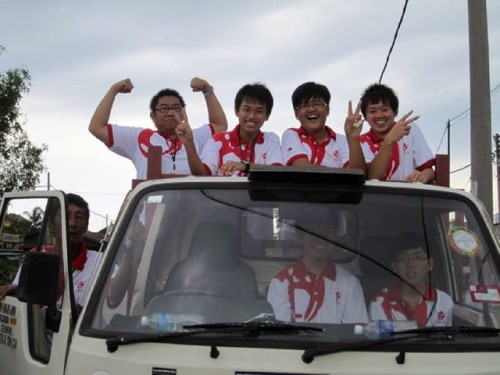 Teenagers are the same everywhere! 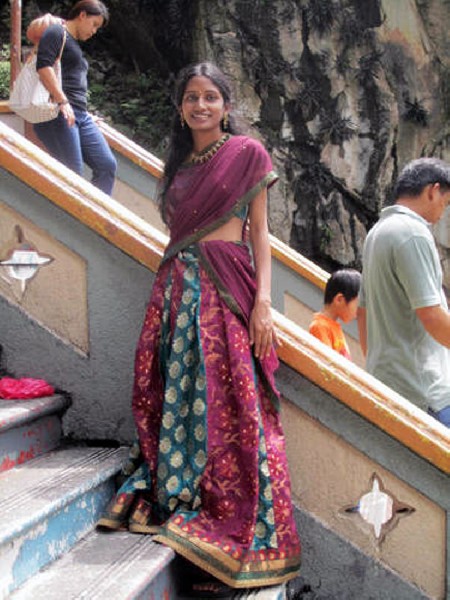 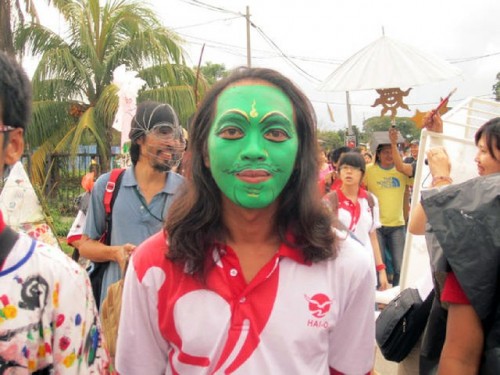 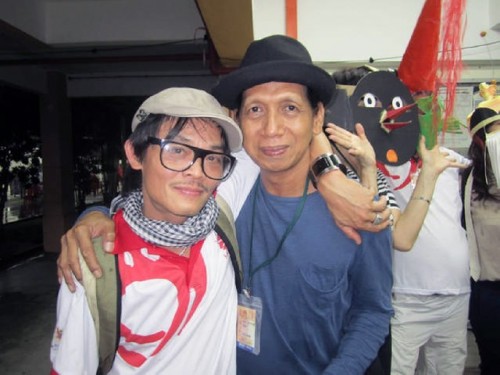 A snap shot during final festivities. 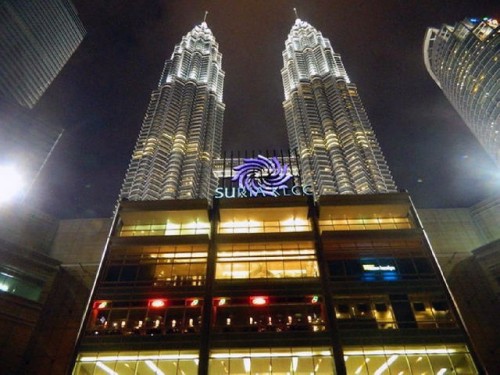 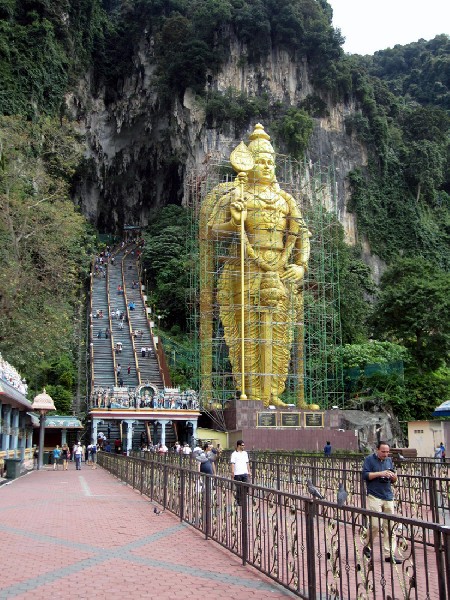 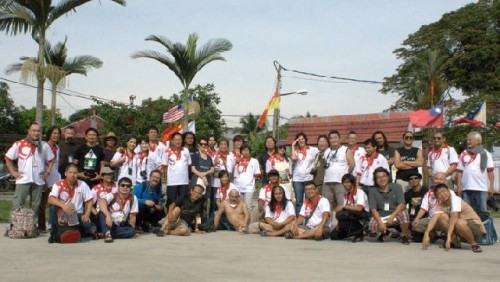 We have known Ellen Schön since the first 2007 Transcultural Exchange Conference: International Opportunities in the Arts, and have reported in BFA about the meetings.  These biannual conferences in Boston, Massachusetts, bring together international representatives of organizations and universities, who offer hundreds of global possibilities for participation by artists working in many media.

In conversation, Ms. Schön  raved about her first ‘Artist Residency’ experiences. Since then, she has spread generously good will and her art work. She has made friends in places like Eastern and Western Europe and Scandinavia and now in Malaysia. Following is her article about:

Ng Bee organized this spectacular, multi-faceted event called, We ART Together, with help from the Sasaran Art Association, private and corporate sponsors, and many volunteers. Bee received his degree in Fine Arts at the Nanyang Academy of Fine Arts in Singapore and further trained at L’Ecole Nationale Superieure des Beaux-Art in Paris. I first met Bee and his friend, Tang Yeok Khang, a few years ago at an artist residency at the Kendlimajor Art Center in Hungary. There, they acquainted me with their art work and collaboration. To my delight, I received an invitation to participate in their art festival.

I had a vague idea of Malaysia’s geography, but had to check a map to see its exact location. Just above the equator, Malaysia is divided in two sections hundreds of miles apart: East Malaysia is on the island of Borneo; West Malaysia, also known as peninsular Malaysia, borders Thailand in the north and Singapore and Indonesia in the south. The village of Sasaran, in peninsular Malaysia, is in the province of Selangor, about an hour and a half north-west of the capital, Kuala Lumpur. It is less than thirty minutes from the west coast on the Straights of Malacca. The Straights are a major sea trade route from India to China, which is why, I was told, Malaysia is made up of a variety of religious and ethnic groups--Malays, Chinese, and Indians.

Unlike other residencies, the Sasaran International Arts Festival focused not only on creating and exhibiting artists’ work, but also on developing strong relationships between the international artists and the local community. In this context, artists became ambassadors of their cultures. The Sasaran Art Association’s mission is “to promote understanding of art to the public, cultural exchange between Malaysia and other countries, harmony between Malaysia’s various ethnic cultures, environmental conservation, as well as to inspire a new generation of artists (there was a children’s art camp on site)--ultimately transforming Sasaran into a permanent ‘Art Village.’ ” Room, board and materials were provided to the artists. In exchange, we donated at least one piece of art work to our hosts.

Our first evening together was full of pageantry: Speeches, artist introductions, and ceremonial fire lighting. As dusk fell, we lit gigantic red and yellow translucent cloth lanterns, which rose like constellations of stars into the sky—gorgeous! There was a barbecue with all kinds of fish, including delicious tiny, spiced clams and later, we continued festivities with drink, dance and song. Each artist sang traditional songs from his or her country. I decided, after a few beers, to sing House of the Rising Sun. Good choice as it turned out, since Long Thien Shih, the guitar player, knew the song and filled in a few forgotten lyrics.


The next day we got to work. Artists worked alone or in collaboration. Media included painting, installation, performance art, photography, ceramics, and sculpture. We worked in studios converted from class rooms at the SJKC Chung Wah, a Chinese primary school in Sasaran. Studios had no air conditioning, but fans and louvered windows counteracted the tropical heat and humidity. Open air porticos over the walkways protected us from intermittent downpours.

One could not drink the water without boiling, and facilities were mostly squat toilets (provide your own paper). However, these were minor inconveniences. Taking seriously the theme, We ART Together, many artists contributed to the community by creating 3-D art murals and installations on the school grounds and at a nearby temporary outdoor site. Ng Bee has hopes of converting the temporary site, currently an empty lot, where shops had been destroyed by fire, into a permanent Sasaran Art Park featuring rotating art installations.

Our studios were open to the public, so crowds often gathered around to watch our artistic process. I focused on ceramics, sharing the studio with four lovely Singaporean ceramic artists. Lo Kim Tai, a local machine shop owner, asked what was needed for equipment. He then created an electric potters wheel from scratch, using materials at hand from his shop. The welded steel disc on an electric motor worked only at one speed—fast, and was a little wobbly, but did the job! The children in the village and their parents seemed very interested in watching me spin clay into shapes. Mr. Cheah, a ceramic artist from Kuala Lumpur, had brought us stoneware clay. Later, we could use his studio to glaze and fire our clay work in his gas kiln. One of my studio mates, Huey Ling, also did a sawdust firing with excellent results.

Sasaran residents opened their homes to the artists. I shared a house with Russian painter and enamellist, Ludmilla Baiceava, and Japanese photographer, Abe Shigeru. We lived in a Chinese house next door to an Indian family. In early discussions around the dining room table, we asked ourselves what we would make during the residency. “No idea,” Ludmilla said. However, we anticipated that the place itself would guide us.

Food was served family style in the school’s open-air cafeteria. Typical meals, including breakfast, were prepared of fried fish and boiled white rice, accompanied by a green vegetable similar to bok choy, and Chinese tea (Oolong). Occasionally, we ate in restaurants, enjoying further gastronomic pleasures. Unexpectedly, I discovered that fish bones from my meals provided inspiration for my art. Sasaran is a fishing village after all.

We also had the rare opportunity to see a Chinese funeral in the tradition of the Hokkien people, which happened to be on display across the street from our art studios. The community built an elaborate paper house and paper possessions—true examples of folk art. These paper goods, meant to sustain the deceased on the other side, were ceremonially burned one evening in a huge bonfire. Preceding the funeral, we enjoyed a street-side Chinese opera performance.

Later, three of my fellow artists and I were asked to judge Sasaran’s children and adult “fashion show.” Cash prizes and trophies were awarded, and the event rated an article in the local paper. We received no complaints on our choice of winners which, luckily, coincided with the opinions of neighbors and parents.

After almost two weeks of art-making, the festival drew to a close. Costumed international artists, organizers, volunteers, and children paraded through the village of Sasaran in a final demonstration of pageantry. Cavalcades of cheering residents on motor scooters accompanied us. The closing ceremony and exhibition, celebrating the international artists work, was held at the Chung Wah School. The exhibition will travel to other venues in Malaysia.

Selangor’s chief minister, Tan Sri Dato' Seri Abdul Khalid Ibrahim, greeted the artists at the exhibition’s opening reception. In his speech, Mr. Ibrahim expressed his support of the Sasaran Arts Festival and its mission, acknowledging that art has an important role to play in a plural society. Who would not agree? The openness and cooperation we experienced with each other personally and professionally during this art festival (not available in many other contexts), is testament to Ng Bee’s inspiring vision of art and global cultural exchange. I hope he and the Sasaran Arts Association receive the support they need to continue realizing their worthy goals.