The Brothers Size By Tarell A. McCraney. 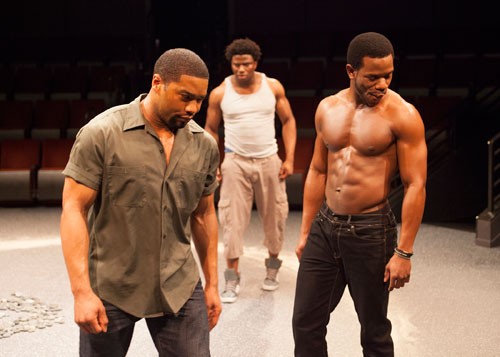 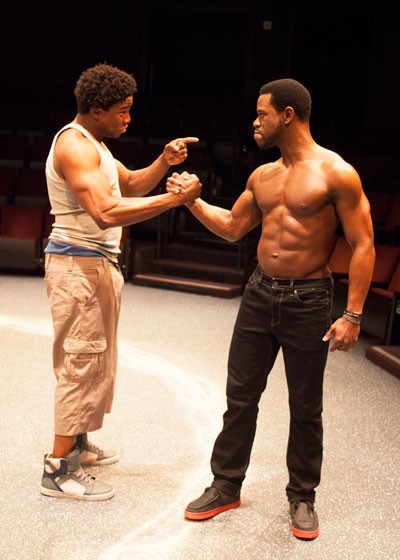 New work at the Old Globe. 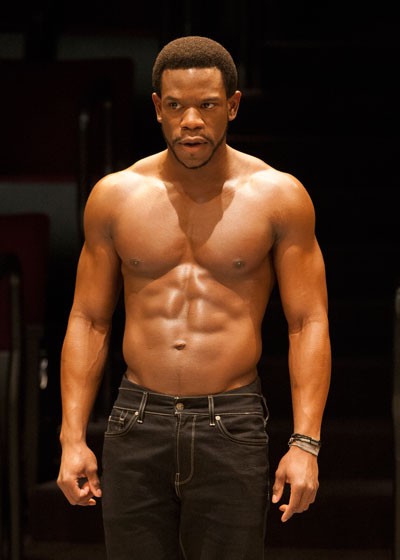 Good new playwrights are hard to come by these days.  To discover a new and talented playwright is the fervent prayer of producers and director the world over.  The search by Southern California artistic directors may have ended at The Old Globe Theatre’s Sheryl and Harvey White stage with “The Brothers Size” written by Tarell A. McCraney.

McCraney, is best known for his acclaimed trilogy,  “The Brother/Sister Plays: ‘The Brothers Size’, ‘In the Red and Brown Water’ and ‘Marcus: or the Secret of Sweet’.  The label “new playwright” may be a little misleading, in that McCraney has a handful of plays that already have been produced, both in Europe and the United States.  Perhaps, a more apt description should read McCraney is an emerging but seasoned playwright.

The Old Globe’s production of “The Brothers Size” is directed by award winning director Tea Algic.  Algic is a very seasoned and a highly respected professional director originally from the Balkans.  It’s not the first time the Globe has enjoyed a Balkan connection. Former Artistic Director Darko Tresnjak was born in Zemun, Yugoslavia, and grew up in Poland and the United States.

McCraney’s play is a story about “love” – as are most good stories.  In this case, it’s a love story between two African American brothers, and the ancient and tribal mythic traditions that bind them as a family.  The Older brother Ogun Size (wonderfully and sympathetically played by Joshua Elijah Reese) is a study in sacrifice in this cautionary morality tale.

Oshoosi, the naive young brother (winningly played by Okieriete Onaodwan) has just been released from prison.  While Ogun is the owner of an auto repair shop who is trying to catch a piece of the American dream, Oshoosi is more a case of the American dream interrupted.  Besides, Oshoosi is just not interested, at the moment, in rejoining mainstream America.  He’d rather seek the pleasures of the flesh first, then, he’ll think about what to do with the rest of his life.

There is a third character in this powerful, yet poignant, triangle of life and love in the Louisiana Bayou; one who is loaded with symbolism.  Antwayn Hopper is absolutely riveting in his portrayal of Elegba, a fellow prisoner who has been released with Oshoosi.  Or is he merely a figment of Oshoosi’s imagination?  Hopper plays him bare-chested throughout the play, exuding a sexuality that is simmering just beneath his skin; awaiting an opportunity to rise up and tempt unsuspecting victims.

Although not technically an actor in the production, Percussionist Jonathan Melville Pratt performs live African drumming and original music throughout the performance that makes him an integral member of the cast.  His contribution to the production could be likened to the role of the special effects and/or the sound editor in films.  Pratt’s musical touches are not only hypnotic but help pace the show by underscoring the story’s modern setting and its character’s ties to African roots, despite a five hundred year history of living in America.

The inspired direction of Tea Alagic, and the talent of the performers, is what make this production work.  Of course, it helps that Alagic has had a working relationship with McCraney, both as an actor and a director of several years standing and is one who completely understands the material and the dramatic intentions of the playwright.  Also, she has directed this play several times, both in Europe and here in the States.

As a twentieth century critic, now trapped in the twenty-first century theatrical scene, it’s apparent that the structure and form that served the theatre well for so many years (linear plays: beginning, middle, and end) is now undergoing changes in content and in the way plays are being written and accepted by new audiences.  “The Brothers Size” is loaded with F-bombs and N-bombs.  The vernacular is the method of communication these days.  And there is nothing wrong with this change.  It just takes a little time for these changes to kick in for society in general.

When I shared my thoughts on new and emerging playwrights with the Globe’s new Artistic Director, Barry Edelstein, I mentioned how much I admired the late, great, African American playwright August Wilson.  Edelstein commented that perhaps McCraney is on the cusp of becoming the next August Wilson for the 21st Century.  He certainly has the talent and a way with story, style, and method in telling his stories.  Perhaps, he might indeed, become the next August Wilson.  He is only thirty-three years old.  Time will tell…

“The Brothers Size” performs on the White stage through February 24th, 2013.

Reposted with permission of Jack Lyons and Desert Local News