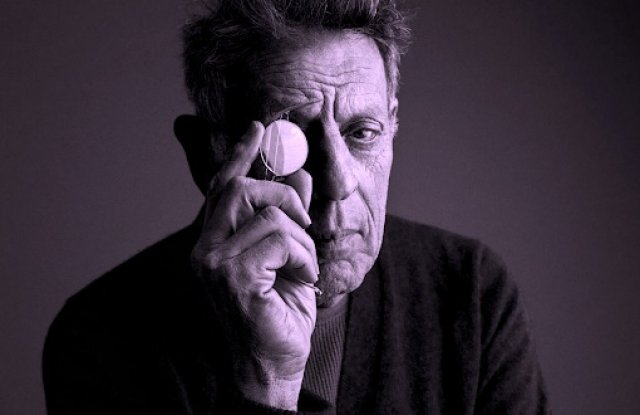 This performance formed the centerpiece of Glass' residency at the Hall this season, and of the venue's ongoing festival celebrating the music and culture of the 1960s.

This was the New York premiere of the revised version of Glass' score, a work that was written  five years before Glass and Robert Wilson detonated Einstein on the Beach. It stands alone in the vast Glass catalogue. Its uniqueness is in that it allows its performers some leeway for improvisation, and its length in performance can range between sixty and ninety minutes. (Friday night's performance ran just over an hour and a half.)

Although there was room for improvisation, the three groups onstage (the Philip Glass Ensemble, the San Francisco Girls' Chorus and students from the San Fransisco Conservatory of Music) were still confined to the trademark Glass technique of small melodic cells, built rapidly atop each other to generate its vast structure. The technique results in something with the size and weight of Stonehenge, if that monument were made from grains of sand.

Michael Riesmann took the conductor's position, working with a keyboard, a score and a glowing MacBook in front of him. To his right, Valérie Sainte-Agathe directed the singers, who sang wordless tones at her cue.  Glass himself sat at her right, a pair of noise-cancelling headphones clamped on his head, hunched over another keyboard which he played occasionally. The other keyboardists generated the musical pulse that drove the work relentlessly forward.

Once that pulse started, the effect on the listener was like drowning in an ocean of sound. The performers were all amplified, their electronic keyboards and voices carefully managed by a pair of soundmen, one onstage and one in the house. The cells, generated by the four keyboardists built on each other in vast towering structures of three beats, four beats, five, all overlapping in layers upon layers. At a bare nod from Glass, the pulse would change from warp to woof, moving to introduce a horn, the singers, or another of the endless rhythmic shifts.

This sounds like it could be mind-numbing. However, Glass' tiny cells of sound were given color and life by the voices of the twenty-four choristers, all women, and the seated saxophones, trumpets, trombones and french horns. It was difficult at times to distinguish organ from horn, voice from trumpet, but the overall effect was immersing and sort of pleasant, like swimming through the ocean depths if one had gills and cold blood.

However, there is a definite human cost to performing an uncompromising work of this nature. All of the singers stood stock-still for ninety minutes, hitting their cues and holding their scores. And then at about the 80 or 85-minute mark, one of them leaned forward and threw up, loosing a flow of strawberry-pink liquid down the front of her black dress. This happened more than once, the stuff spattering on the unfortunate singer to her left, collecting in a puddle on the floor.

Glass and Riesmann appeared not to notice. They didn't pause. They didn't stop. The piece ground through its final cellular iterations over the last five minutes. But it was too late: the sheer, relentless weight of Music with Changing Parts had taken its final, human toll. Which begs the following question: Which is more important, the performance of this popular but obscure sound-sculpture or the health and safety of the performers upon the stage? There is no real answer. We can only sit and stare in a vague sense of disquiet, as we weigh discomfort and dedication, the value of art against the quality of life.  (Reprinted with permission from Superconductor.)