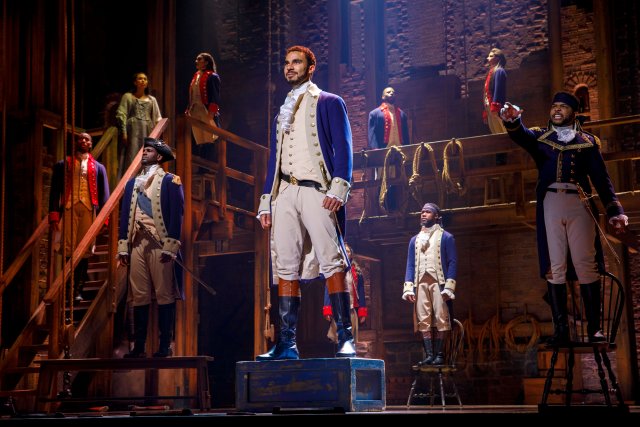 Photo by Joan Marcus The company of a national Hamilton touring production performs in this passionate scene. 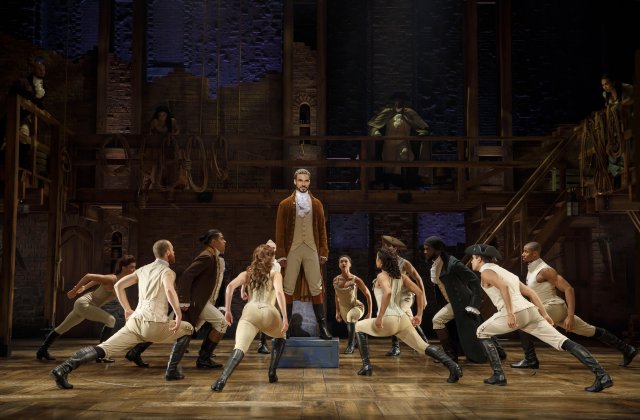 Photo by Joan Marcus All lean in to the titular character in this scene. 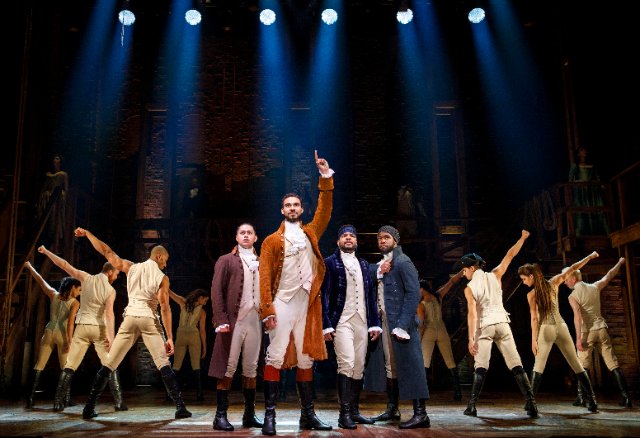 Photo by Joan Marcus Hamilton rarely, if ever, fails to command attention.

At this time, drama students do not have license to mount a production of the musical phenomenon, Hamilton.

Once youngsters, many of whom are committed activists these days, get their chance to climb into passionate, fiery roles such as the opinionated titular character, raging fires will radiate from school stages. And no doubt, drama students will rise up and relish the chance to rap.

But until licenses become available for  school drama clubs, youngsters can envision themselves on stage rapping like Hamilton and Jefferson during their cabinet battle rap.

Certainly, there are many chances for youngsters and their families to catch a production of Hamilton -- provided they have the money to buy one the show's infamously high-priced tickets.

One of the multiple equity touring productions has opened a run in Miami. It continues through March 15 at the Adrienne Arsht Center.

Fortunately, this production pulsates with plenty of energy. Moreover, the performers convincingly inhabit their characters. And they never stumble while strongly singing Hamilton creator and former star Lin-Manuel Miranda’s rapid-fire, cleverly-rhymed lyrics. A live, richly-sounding orchestra accompanies the performers without drowning them out.

Of course, it’s challenging for performers to strike the right balance between maintaining the speedy pace and ensuring audiences hear and understand them.

Sometimes, it was difficult to understand the performers on opening night of the Miami run. Perhaps it’s impossible to achieve 100-percent clarity. Certainly, it helps if an audience member reads the script, listens to the original Broadway cast CD or at least reads a plot point by plot point summary (search for one online) beforehand.

Rest assured, it’s easy to make out lines such as “Immigrants, we get the job done,” and “I’m not throwing away my shot.” The actors clearly sing them with fervor and dogged conviction. At least on Miami’s opening night, the audience rewarded the actors with applause following these proclamations.

Still, even if you can’t comprehend some lyrics, it’s easy to get absorbed in this show. Its color, passion, relatable characters, compelling story and timely themes make it captivating. Besides, Hamilton brings history to vibrant life. It's never dry.

For the uninitiated, Miranda tells the story of Alexander Hamilton’s life and the founding of America. In addition to Alexander Hamilton, historical figures such as Thomas Jefferson, James Madison, and George Washington populate the musical.

Miranda, who won numerous awards for Hamilton, including the Pulitzer Prize for Drama, relates this tale creatively and boldly. For instance, the multi-talented artist has set his clever lyrics to musical genres anachronistic for the time, such as rap and hip-hop. These genres neatly fit these characters’ personalities. After all, just like their newly-formed country, they are “young, scrappy and hungry.”

As most theater-goers surely know, performers of color play these characters in all Hamilton productions.. In real-life, they were white.

Casting minorities in these roles connects the ever-changing America of today with the rapidly changing America of the Revolutionary-War era. Further, casting these characters as minorities communicates the notion that all people have an equal opportunity to succeed at changing the course of this country and forging a better life for themselves. And just as our founding forefathers broke free from British Imperialism, so can today’s persecuted stand up to their persecutors and attain freedom as well as success.

As a matter of fact, Hamilton himself was an immigrant from the Caribbean. He experienced a rough early life. But as the musical shows, with some luck and mettle, he worked his way up to near the top. He became George Washington’s “Right Hand Man” during early America’s fight for independence. In addition, he was one of America’s Founding Fathers and this nation’s first Secretary of the Treasury.

Of course, Hamilton encountered obstacles on the way up. And Miranda dramatizes them in ways that rivet eyes and ears to the stage. Certainly, the rapping, the performers' near-constant movement, and the Les-Miserables-like solidarity and passion keep audiences rapt.

The often-forceful dancing, which this cast nails, conveys resolve. And it's as much a part of the narrative as the dancing in shows such as West Side Story.

The cast dances, sings and moves on scenic designer David Korins’ metaphorical, seemingly sturdy, two-level set. In front of brick walls, a large wooden scaffold bearing coils of hanging rope provides a background. Also, there’s a platform on which the performers can walk above the stage and descend onto it and the turntable.

Korins has said that the country was built from the scaffolding. And the brick wall stands for the nation’s foundation. It’s all put together in the manner that workers would have built a boat in the 18th century. This represents the fact that Hamilton and other immigrants traveled here by ship and the day’s carpenters would have been ship builders.

Meanwhile, the turntable reinforces the show’s constant motion. It can symbolize time passing and change occurring. Also, the turntable further increases tension during Jefferson and Hamilton’s “Cabinet Battle #2.” The debaters rotate on the turntable, allowing audiences to more fully experience each man’s respective side.

An enthusiastic, competitive Edred Utomi played the titular character during the reviewed performance. He imbues Hamilton with the necessary fervor and sense of urgency.

Utomi’s Hamilton moves quickly and is loud, adamant, argumentative, and impulsive. He appears fully invested in his actions, such as writing. The performer, whose facial expressions are intense, writes as though he's "running out of time.”

While Utomi’s Hamilton is fiery, the performer finds a softer, more vulnerable side during intimate scenes between Hamilton and his wife, Eliza.

Opposite Hamilton, Alexander Ferguson’s Aaron Burr is equally intense and possesses a sarcastic edge. But through Ferguson’s telling facial expressions, especially in the beginning, we gather that Burr isn’t as impulsive as his frenemy. Still, Ferguson grows convincingly enraged at the end, after Hamilton betrays him.

One could easily argue that Hamilton betrays Marquis de Lafayette. The latter is a French aristocrat and military officer who aided the colonists during their war for independence.

The presence of this character highlights such timeless and timely questions as how involved America should be in other countries’ affairs. Do we owe them favors if they’ve helped us?

Bryson Bruce instills this Frenchman with such unbridled enthusiasm, you fear his limbs or other body parts may come off. While Bruce may overdo it a bit, he endears us to his character.

This character, as Bruce plays him, has a good heart; he is clearly in solidarity with his American friends.

Bruce not only portrays the Frenchman, but also Thomas Jefferson as a jazzy, flashy, flamboyant individual. He lends Jefferson these traits, while playing Jefferson sincerely.

Ditto for Peter Matthew Smith in the role of King George. As Smith portrays the monarch, King George is clearly in love with himself and flamboyant. Also, the performer gives his character nuance that further enhances the comedy.

Smith makes King George as lovable and comical a villain as Peter Pan’s Captain Hook. But there’s also a more fierce, intense quality about this King George than others I've seen. He switches quickly and seamlessly from playful comedy, and thus enhancing the humor.

It’s easy to turn King George into a caricature. However, Smith’s multi-faceted performance, complete with vocal acrobatics, helps him avoid this.

In stark contrast to the comical performances, a tall Paul Oakley Stovall lends George Washington a polished, restrained, yet commanding presence. He clearly lets us know who is boss. To his credit, Stovall doesn’t glorify Washington. In fact, when necessary, the actor conveys a more modest, human side .

Meanwhile, the female cast members fare as well as their male counterparts.

In particular, Zoe Jensen creates a soft-hearted, devoted Eliza Hamilton. She is convincingly heartbroken when the Hamiltons’ son, Philip, is killed in a duel. And Jensen unleashes keen anger during the song,“Burn.” The number allows Eliza to express her feelings about her husband’s infidelity.

Eliza’s sister, Angelica, is more outspoken. In the role, Cherry Torres creates a dynamic character. She is credibly loving toward and protective of Eliza.

In addition to the fine performances, audiences should marvel at Paul Tazewell’s period, detailed and character-appropriate costumes. They are as varied as the characters themselves.

Hamilton is a musical about Revolutionary America, as told by America now. In fact, Tazewell stresses this in his design. Specifically, the performers look modern from the head up with their hair and makeup. From the neck down, we see visually appealing period costumes from the late 18th and early 19th century.

We are able to see the costumes, set and actors more clearly, thanks to lighting designer Howell Binkley. The degree of intensity and color choices deftly enhances mood and creates focus, while illuminating the stage and enlivening the action.

No doubt, the impact of Lin-Manuel Miranda’s musical extends well beyond the stage.

To learn more about show’s impact, log onto http://www.playbill.com/article/the-hamilton-effect-8-ripple-effects-of-the-smash-musical

Hamilton’s Miami run continues through March 15. For a list of current touring cities and other information, visit https://www.broadway.org/tours/details/hamilton,673.