Lifespan of a Fact 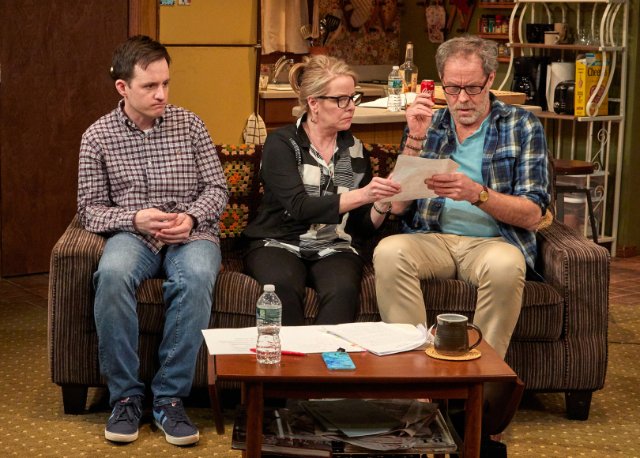 The central question in Lifespan of a Fact which is getting a magnificent production at TheaterWorks in Hartford through Sunday, March 8 is: do verifiable facts tell the real story?

Journalists are expected to deal with facts. But columnists? Essayists? Do they have more leeway to change details for the sake of the storytelling arc?

John D’Agata, the essayist whose essay is being questioned, says “yes;” that facts can hide the greater truth. So when Jim Fingal is questioning the number of strip clubs in Las Vegas that John cites, he is upset. As John says, “the most precise numbers in the world tell you nothing.”

As Jim, the young fact-checker points out later in the show, on the web, the trolls and conspiracy theorists jump on the slightest inconsistency to devalue or refute events and stories.

Emily Penrose, editor of a respected magazine (think New Yorker type) has an essay by D’Agato, well-known and brilliant writer that uses the death of a teenager jumping from a Las Vegas hotel as the catalyst to explore the transient nature of the city. She wants to publish it immediately, but she has a hesitation. D’Agata has been known to vary from the absolute truth in the name of the literary impact.

She needs it fact checked immediately, but in the multiple reorganizations which have gone on the publication, that department has been eliminated. After making a request for a volunteer to do this assignment which includes working over the weekend, an eager intern appears. Jim Fingal is a Harvard graduate who is adept at searching out information on the internet by writing his own codes.

But Jim misses the clues that Emily drops: it must be done by Monday, she wants a “solid good faith effort” and to see that the “rational details” are accurate.

Thus begins the play about an essayist and the fact checker with the editor caught in the middle. It’s based on the book written by the author and fact checker in the play and adapted for the stage by Jeremy Kareken & David Murrell with Gordon Farrell.

Jim takes to the job with a vengeance, trying to prove every statement in this long essay about a 16-year-old Las Vegas teen who jumped from a building. Every time Emily checks with him, he is raising another issue and after several days, he is still on the first paragraph! He takes it upon himself to fly to Las Vegas to do field work and even knocks on the door of the parents of the dead boy!

It is funny when he explains to Emily the problem with confirming the number of strip clubs in Vegas. It appears that the association which was John’s source has used different numbers at different times. Then he gets into “what is a strip club?”

Jim, as played very well by Nick LaMedica, is earnest to a fault; if he misses the nuances, he also seems truly committed to the ideals of journalism. His counterpoint, John D’Agata, is also played very well by Rufus Collins. John is an established, respected essayist as well as college professor of writing. He’s more than a little annoyed at the numerous questions from Jim, which he views as nit-picking, trivial matters.

Poor Emily, the editor, is not only pulled between the two, but feels the tugs of the past (was she burned by a less-than-accurate story once?) and her desire to run a fine piece of writing which will capture a larger audience for the publication. As played by Tasha Lawrence, she’s both annoyed with Jim’s cluelessness and John’s off-handedness.

Tracy Brigden has done an excellent job getting this to seem very real, very important, and very humorous. TheatreWorks’ smaller space, adds to this production which features a fine set by Brian Prather that includes the sleek modern office and John’s well-worn living room. We feel up close to the action.

This is one short play (85 minutes) that kept me so interested, that I never checked my watch.

Overall this production is just as good as the one I saw on Broadway a year ago that starred Cherry Jones, Daniel Radlciffe and Bobby Canavale.

At the end we are left wondering the outcome and the aftermath.