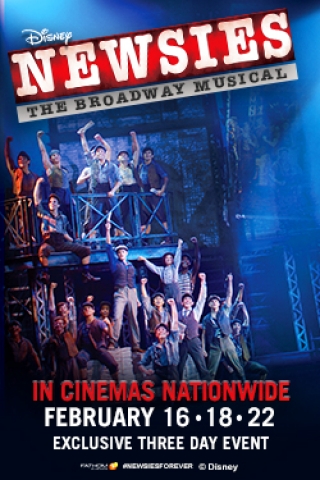 It’s probably not popular to brand a journalist a villain during these early days of the Trump presidency, what with his attacks on the media.

Champions of the First Amendment surely will cast journalists in a positive light and "The Donald" in a negative one.

But flash back to the end of the 19th century in New York City, and the roles are reversed.

At least in the Disney musical hit “Newsies,” which is based on a true story, the hated man is newspaper publisher Joseph Pulitzer, who jacked up the price for newsboys to buy the very papers they were to sell.

The “good guys” in “Newsies” include a President of the United States – Theodore Roosevelt.

It’s refreshing to once again view a POTUS in a positive light; a filmed performance of the Broadway production of the Tony Award- winning musical plays movie theaters for one more day Wednesday.

Fathom Events and Disney Theatrical Productions filmed a performance and, in doing so, brought Broadway basically to people’s backyards.

The stage version features high-flying leaps, twirls, somersaults and a clever use of newspapers as a prop for dancing.

The live musical, with a book by Harvey Fierstein, considerably raises the stakes from the less successful 1992 film.

In the stage musical, a female reporter named Katherine covering the Newsies’ strike is also an underdog, so she can empathize with the Newsies. A shocking revelation toward the end locks her in an inner conflict between loyalty and betrayal.

Nobody has accused her of being a “failing” journalist or reporting “fake” news. However, she’s out to prove she can cover top stories.

Actress Kara Lindsay’s spirited, determined, courageous and ambitious Katherine will leave you cheering for her as much as the Newsies.

A talented group of young adult actors play them as gritty, wise-cracking boys who refuse to give in to Pulitzer.

As the youngest Newsie, Les, a real-life young boy actor, Ethan Steiner, needs to show more feistiness and tone down on the "cuteness" factor.

If Steiner's Les is loveable with his heart-melting smile, Steve Blanchard makes a despicable Pulitzer, who narrows his eyes in hatred and derision at anyone he considers below him. Contempt and sarcasm drip from his face and voice as he stands tall and proud.

The Newsies are led by Jack Kelly, Pulitzer’s chief rival, who organizes a union of sorts and is played by Jeremy Jordan with tenacity, a winning charisma and a weariness that comes with working the rough streets of New York. You get the sense that he can literally see the place of his dreams during the song “Santa Fe.”

It would be nice to know what, in Kelly’s mind, the city in New Mexico has that other open areas lack. He seems obsessed with Santa Fe for some reason.

Perhaps he feels it’s just far enough away from Pulitzer, whom he views with as much scorn as many do Donald Trump.

Note: To find the theater nearest you where “Newsies: The Broadway Musical” will play Wednesday, visit http://www.regmovies.com/movies/movie-folder/2017/disney-s-newsies-the-broadway-musical-198062