Waiting for Godot in Mexico 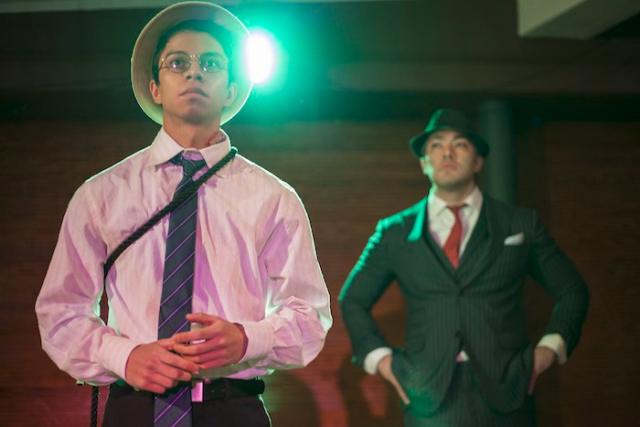 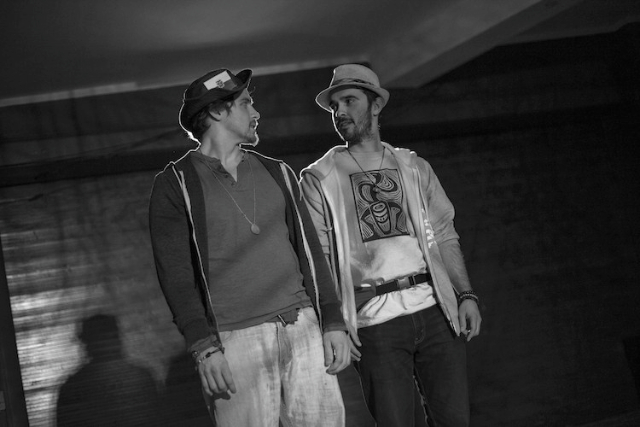 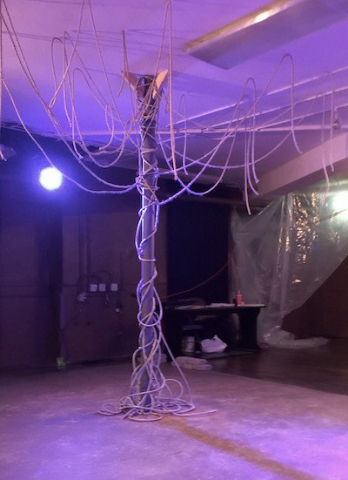 The tree. Photo by Nancy Bishop.

You know the scene. “A country road. A tree.” Samuel Beckett couldn’t have been more succinct in the scenic direction for his existential classic, Waiting for Godot. That tree takes on mythic proportions as the play proceeds.

Tympanic Theatre adds another dimension to its new and well-performed production of Waiting for Godot. Director Aaron Mays sets the scene on the Mexican border and casts talented Latino actors to play the woebegone but always-optimistic Vladimir (Christopher Acevedo) and his morose but resilient road-buddy, Estragon (Felipe Carrasco).

Didi and Gogo are perpetually at that country road, always looking off into the distance to see if he’s coming. And at the end of each act, they learn that Godot isn’t coming today, but surely tomorrow. “Tomorrow, everything will be better,” Vladimir says. And at another point, Estragon says, “We always find something, eh Didi, to give us the impression we exist?”

Their waiting is interrupted by the arrival of Pozzo (Christian Castro), a wealthy man dragging his slave, Lucky (Jordan Arredondo) to the market. Lucky, a classic comic character, is silent and obedient until his breakout moment. Ordered to dance, he performs a prancing, hip-wiggling dance, including some vaguely operatic singing. Then commanded by Pozzo to “Think!” Arredondo performs one of the great nonsense monologues of all time with finger-snapping, knee-slapping flair.

Mays’ direction and staging are solid and the cast is excellent, especially Acevedo as Vladimir and Arredondo as Lucky. Castro becomes an arrogant but befuddled Pozzo, who inexplicably is blind in act two. Carrasco as Estragon is a foil for Vladimir’s cheer and the two make the most of the humor in Beckett’s script. (These two characters are often played for humor, as some of the past actor-pairings suggest: Tom Ewell/Bert Lahr, Zero Mostel/Burgess Meredith, Steve Martin/Robin Williams.)

Eleanor Kahn’s set design is a barren stretch of desert or plain, with a few cement blocks strategically placed. The tree is a structural pole, strung with ropes representing branches. Lighting design by Claire Sangster skillfully adjusts the lighting as day moves toward evening.

The idea of reflecting today’s immigrant struggles in Beckett’s 60-year-old play is interesting but little of the production really touches on this concept. A “No Traspasar” sign and a guard at the theater entrance suggest the border environment. The play stands on its own as a drama of human survival and hope. Court Theatre produced Waiting for Godot in 2015 with an African-American cast. As with the Tympanic version, the nature of the cast adds new context to Godot. (Beckett’s script, originally written in French and translated by the playwright, includes many French references.)

Waiting for Godot has been the object of much discussion about its meaning—and possible political and religious overtones–over the decades. One of Beckett’s biographers said, “… although the play can in no way be taken as a political allegory, there are elements that are relevant to any local situation in which one man is being exploited or oppressed by another.” That is how Godot becomes the story of Latin American travelers waiting on the border to enter the United States.

If you’ve never seen Waiting for Godot, or if you like the play as much as I do, go and see this production in a church basement on the north side before March 12. Tympanic Theatre has a pay-what-you-can policy for tickets. Performances are Thursday-Sunday at Berry United Methodist Church, 4754 N. Leavitt St.