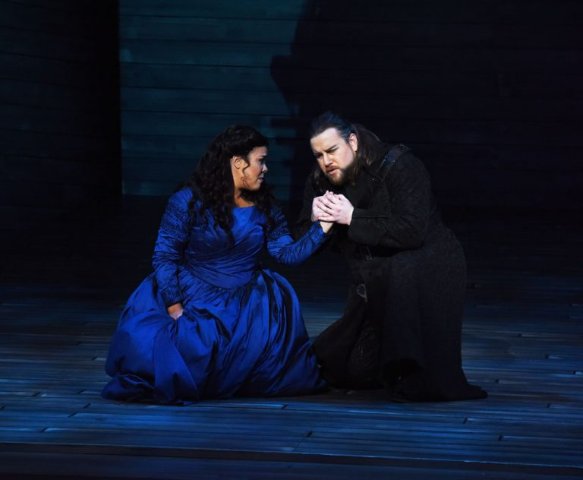 Kerriann Otaña as Senta, Noel Bouley as the Dutchman. All photos by Pat Kirk. 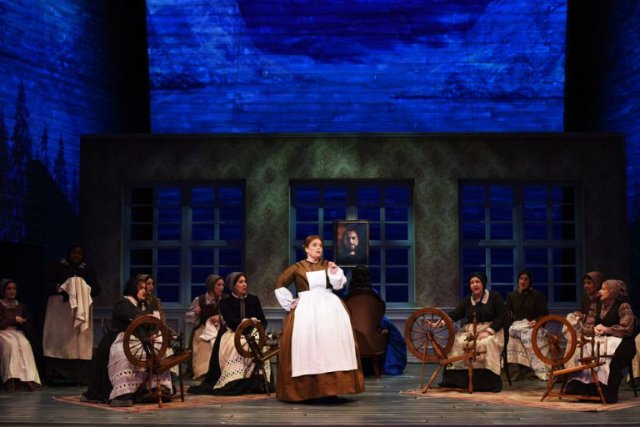 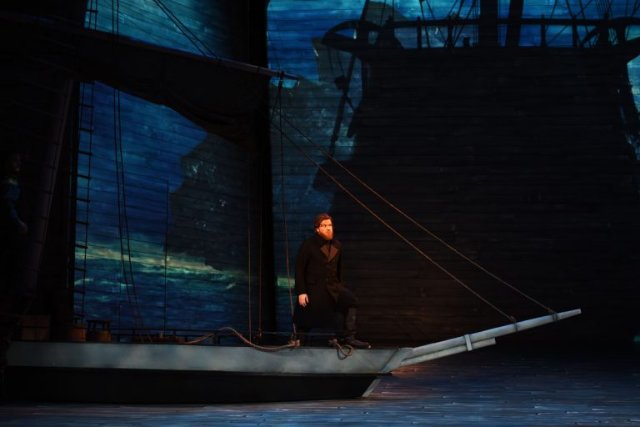 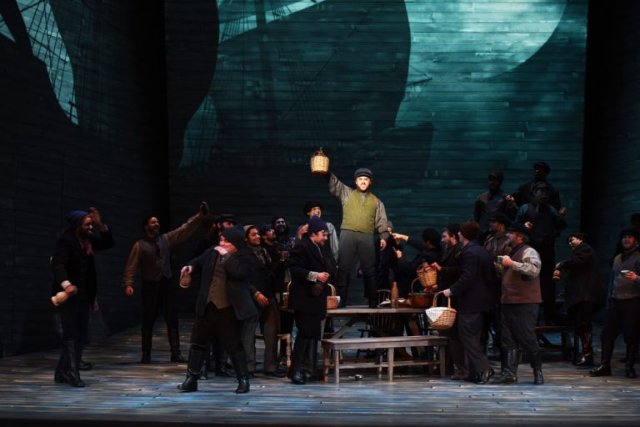 Richard Wagner is most exalted for his four-opera Der Ring des Nibelungen – The Ring Cycle. A great deal that distinguishes that master work found its earliest application in the first opera of his musical maturity, The Flying Dutchman. Rudimentary use of leitmotifs appear here as does the theme of redemption through love; the trials of the romantic outsider; the use of legend to drive the storyline; and much of his musical idiom. You also get greed, betrayal, and fantasy along the way, engagingly revealed. Moreover, you enjoy a compact experience in under three hours rather than the marathons of The Ring operas. Opera San José offers an exemplary treatment of this compelling opera.

Suffering on a tumultuous ocean voyage, Wagner conceived of an opera based on a man eternally condemned to the sea. Eternal punishment as a literary theme is broadly established, but the libretto for The Flying Dutchman drew largely on Memoirs of Mr. von Schnabelwopski, by Heinrich Heine, who in turn had adapted folk tales of the Wandering Jew.

The Dutchman is condemned to ply the seas for eternity, save for one day ashore every seven years. Only a woman’s fidelity to the Dutchman until her death would relieve the sailor from his sentence of an endless voyage. On the eve of one of those opportunities, a storm keeps a Norwegian ship from the final reach to its home harbor. The Flying Dutchman eases along side, and the Dutchman grapples his way aboard the Norwegian vessel. Engaging with the ship’s captain, Daland, the Dutchman finds that the captain has an eligible daughter. Having accumulated vast wealth, the Dutchman offers it all to Daland in return for his daughter, Senta’s, hand. She is already pledged to huntsman, Erik, but Daland cannot resist a bargain that would make him a wealthy man.

Act 1 is a dark affair, in terms of visuals and lighting. The tessitura is also very low with all male principal and chorus voices, dominated by two baritones. Noel Bouley is the Dutchman. His expressive voice captures the mournful and haunting tone of the forlorn sailor, while his acting conveys the gravitas of his tragic situation. Gustav Andreassen is Daland. He bellows and mugs as the captain, whose interest in financial gain is clear in the duet “Wie? Hört’ ich recht?” (Did I hear correctly?).”

The tonal contrast of the stormy night in Act 1 with the early parts of Act 2 could not be much more distinct. Now, the women whose men are at sea spin thread in a bright room in Daland’s house. The women choristers sing the light and repetitive “Summ and brumm” (Buzz and humm). And as Wagner’s music had captured the rumbling sound of the sea in Act 1, he musically depicts the onomatopoeic laughter of the women in this scene.

Daland’s daughter, Senta, gazes at a picture of the Dutchman, which inexplicably hangs in her home. When teased about her distraction, she responds with the aria “Johohoe! Johohohoe!,” which lies at the thematic core of the opera. Senta reveals that the Dutchman’s punishment arose from blasphemy and announces that she wishes to be the instrument of his redemption, even surrendering her life to do so. And through her willingness to sacrifice, she becomes the central object of sympathy. Contrary to Wagner’s future direction of continuous melody, this strophic ballad carries an emphatic, recurring punch that makes it the signature aria of the opera, and it is beautifully executed.

Kerriann Otaño plays Senta, and she powers through this pounding, scorching aria and lovingly caresses its delayed conclusion. Although Ms Otaño is listed as a soprano, and Senta is written for a soprano, much of her singing is in the lower part of the range. This suits the artist’s strong, darkly-colored vocalization perfectly, as she presents an ideal Senta.

The story continues to its inevitable conclusion supported by fine music throughout and potent performances by all of the principals and chorus. In many ways, this is Wagner’s most accessible opera, and this production is a very enjoyable and deserving version.

The Flying Dutchman with music and libretto by Richard Wagner is produced by Opera San José and plays at the California Theatre, 345 South First St., San Jose, CA through February 25, 2018.