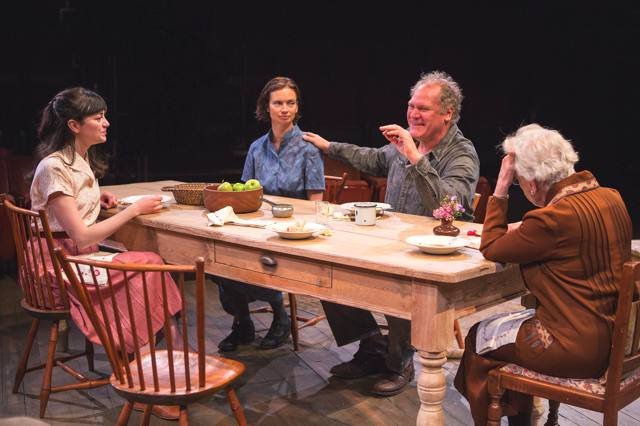 Let me say at the outset, that in literature, no one suffers more than characters in Russian novels and plays except, possibly, JOB and perhaps Oedipus Rex. That being said, San Diego’s The Old Globe Theatre is presenting a new translation and a new way of staging Anton Chekhov’s masterpiece dramedy “Uncle Vanya”.

Renowned Russian translators Richard Pevear and Larissa Volokhonsky along with Chekhov scholar/director Richard Nelson, put their collective heads together coming up with, not only, a new translation of ‘Vanya’, but a unique presentation style that director Nelson calls “conversation voiced dialogue”.

The Old Globe’s White Stage is a performing space in the round, which presents a challenge for directors in solving vexing blocking and traffic issues. At some time during the performance actors will obscure the view of some audience members, causing them to strain to clearly hear the dialogue.

The actors, in the White Theatre production, for all intents and purposes speak to one another, in character, as if they are at an intimate gathering of family members in a kitchen room setting.  According to Erna Finci Viterbi Globe Artistic Director Barry Edelstein, Richard Nelson’s directing requirements for staging the production at the intimate 250 seat White Stage called for 14 strategically placed microphones to be installed over the heads of the on-stage actors in order to capture the conversational dialogue, along with special speakers that are aimed at all rows; enhancing the audiences’ relationship to the on-stage action.  It’s as if we’ve become flies on the wall; not missing even the smallest facial expression, raised eyebrow, or important nuanced character dialogue.  It’s a fascinating and innovative theatrical convention and it works.

The  ”Uncle Vanya” production that fans of Chekhov expect to see will be familiar.  It’s still a wonderful family story of relatives kvetching about the weather, the lack of money, their aches and pains, and the give and take of characters who still struggle in seeking love and small rewards of country life in Russia during the late 19th century.

Director Nelson describes his approach in staging ‘Vanya’, in an interview with James Hebert, senior theatre critic of the San Diego Union-Tribune, who says In keeping with the intimacy of “Vanya”, which is a family play, a very complicated family play, but it’s a family play. “You have Sonya and then you have her uncle, Vanya, and you have a father and a grandmother and a nanny and a stepmother. And the person she loves. It’s a very tight-knit group of a very complicated family, adding, “it also has the smallest cast of any of the Chekhov plays.  It’s a play that is in essence is a series of conversations.”

Actor Jay O. Sanders is charged with the heavy lifting in this splendid production as Vanya. Mr. Sanders,  a seasoned New York- based actor, with over 40 years of experience, delivers a stunning and powerful performance as Vanya. It’s a highly nuanced effort that displays a more assertive Vanya than we are  used to seeing.  His scenes with the young and beautiful Elena (Celeste Arias) in Act I are achingly poignant as he declares his feelings for her.  Vanya’s protective side in Act II in his scenes with his niece Sonya (Yvonne Woods) are also poignant and deeply affecting. She admits that she is in love with Dr. Astrov, the tired and world- weary local doctor who has no romantic feels for Sonya, and, will no doubt, die of alcoholism, due to his depression as a failure in life, is nicely played by Jesse Pennington.

The conversational style of the play is jolted out of its rhythm momentarily, in Act II when an explosive verbal exchange between Vanya and his self-absorbed and irritating, brother-in-law Professor Serebryakov (solidly acted by Jon Devries) berate and demean each other over the fate of the family estate.

The story may remind some of Horton Foote’s family comedy “Dividing the Estate”, however, that is an American southern setting, and “Uncle Vanya”, is a study in 19th century Russian rural life. Generally speaking, however, human emotions are universal, it’s just the cultures and the time periods that are different.  Universal truths come in all shapes, sizes, and colors.  It’s just a matter of how we display and/or accept those truths.  Dedicated performances also come from Roberta Maxwell as Marya (Vanya’s mother) and Kate Kearney-Patch as a former house nanny. It’s a compelling ensemble cast of pros who know their way around a Chekhov masterpiece when they find themselves in one.

Director Nelson shines a light on small cast, intimate productions, giving directors an alternative when staging in the round becomes an issue.  Perhaps ,”conversation  voiced dialogue” productions, when appropriate, will become more acceptable to both directors and audiences.  However, it works for me.

In the technical department led by director Nelson, the single set designed by Jason Ardizzone works for both actors, and the audience. The costumes designed by Susan Hilferty and Mark Kloss are period appropriate under the lights designed by Jennifer Tipton.  The Sound Design by Will Pickens and Alex Heath, deftly blend the sounds of the countryside; enriching the overall visual experience.

If I had to be picky with this otherwise stellar production, it would merely be for a lack of “feeling” that hot, enervating, oppressive, heat that drives the characters ennui, which is a hallmark of Chekhov plays that are set in the summertime.

“Uncle Vanya” performs at The Old Globe Theatre in Balboa Park on the Sheryl and Harvey White stage and runs through March 11, 2018.