Jerry Springer, the Opera at The New Group 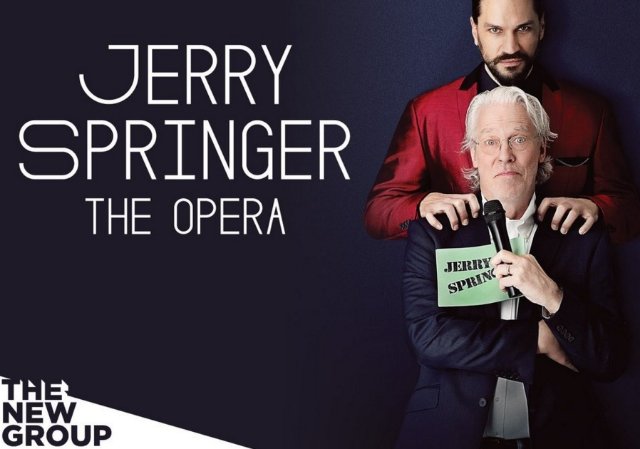 Jerry Springer, the Opera presented by The New Group 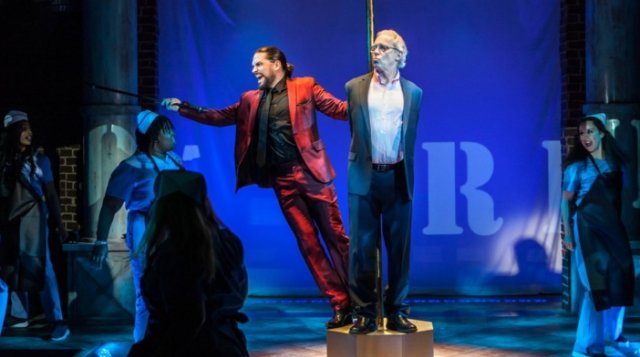 Will Swenson is The Devil and Terrence Mann, Jerry 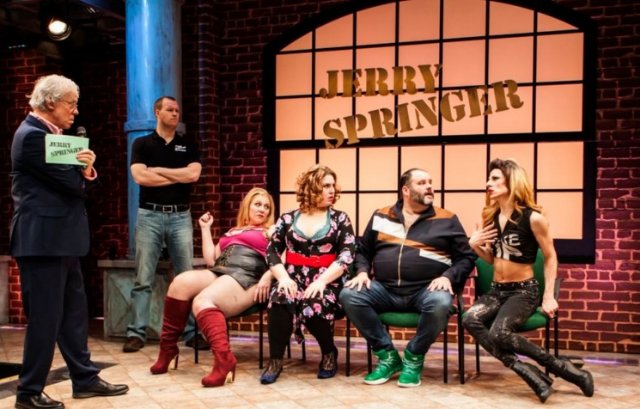 Luke Grooms, surrounded (or trapped) by his wo-men.

An obsession with the Jerry Springer show grew into Jerry Springer, the Opera. This show created by Richard Thomas, was a smash hit at the National Theatre on London's South Bank over a decade go. Tentative stabs at transfer across the pond are now fixed in a production directed by John Rando stated at The New Group. Scott Elliott, artistic director of The New Group sensed that the time was now. After all, we have a reality show host in the White House.

When the show was first staged the Brits found us funny. We of course have laughed at The Full Monty. Today, most people have been sobered by the reality of reality.

Yet the odd combination of whacky secrets and compassion plays well. In fact, we have a rollicking, bemused time.

Three vignettes portray a polymorphously perverse lover, a diapered man who only want to be babied, and a man who can’t stay away from pole dancers.

Thomas, the creator of this bubbly froth, is a humble man who readily admits that the show is more sudsy than opera. Going through the traditional checklist of operatic elements, we note that the show is through composed. No one steps out of the frolic to sing Visa d’arte or O Mio Bambino Caro. Yet there are voices that stand out. They are operatic, big, highly-trained, and beautiful.

One belongs to Luke Grooms who is both Dwight and God. As an overwrought lover with a conventional fiancé, a sexual extra and a transvestite to keep his juices flowing, his bursting bel canto ricochets around the room and stirs us.

Tiffany Mann is a pole dancer and Eve. She too is classically trained and can belt a song with obvious attention to phrasing and texture. Her love songs rival Traviata’s. Oh, these fallen women.

Terrence Mann is terrific as the perplexed and kindly Springer, who does not quite know what is happening.  Will Swenson is a pest of an assistant and transforms into evil incarnate.

The immediately recognizable Springer set is Derek McLane’s creation. The brick walls seem to sit there, ready to bang your head against. Thrust into the audience, the stage seats the ‘chorus/audience’ in two rows on either side of the stage. They are close and familiar to us.  We are often tempted to join with them, and often do.

A touch of heaven is provided by two balconies on either side of center stage. On one, Springer’s inner Valkyrie appears from time to time. Jesus often crops up on the other.

The show has been picketed almost from the start for its lewd take on religion. Yet Springer fills an almost religious mission. He is kindly and non-judgmental. This stance gives the Opera an over-arching spirit of good will. Springer is not at all condescending, but instead deeply sympathetic to the twists and turns of his guests.

Is the show fun? You bet. Legs are kicked up high. Lots of actors prance across the stage and up and down the aisles. In the second Act, Hell bursts into flames like the figure of Don Giovanni.

Much of the music is just right for the routines. However, when the two juicy voices create their arias, the music takes on a serious, contemporary feel, with dissonant phrases and odd harmonies. Thomas clearly can compose.

In discussing whether or not this is opera, Thomas says that it is a musical with operatic elements. Yet the plot seems thoroughly operatic in its over-the-top actions. In the olden days, a dropped handkerchief was the underlying prompt for action. A few hundred years later it is dropped panties. What’s the difference between a pageant in Cairo and parades on TV reality show set?

The grisly secret vignettes work well. The trip to hell is more difficult to take. Yet the Springer show for the Devil includes terrific guests like Mother Mary and of course God. It may be that in the past year our appetite for reality has been more than whetted.

Jerry Springer the Opera is full of laughs and action. In the end, it is Springer’s kindness that lingers. This over the top plot and through composed music with death hanging from a thread is terrific theater.