A Rare Appearance in New York 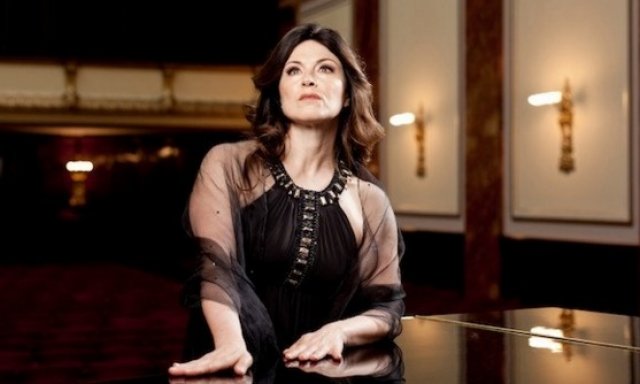 In the presence of Anna Caterina Antonacci performing, the phrase ‘give it your all’ takes on a new meaning. We are not simply witness to best effort and energy.  We have words and feelings physicalized and wrapped into a voice emerging from the entire being.

Antonacci is a soprano-mezzo of wide range vocally and emotionally. Riccardo Muti picks operas because she wants to sing them. Opera goers rush to her performances. Marco Tutino the composer of Two Women, which had its world premier in San Francisco, may well have composed this work for her. She was perfect as Cesira, her musical delivery is rich, shaped and full of color. The following night she gave her all to Cassandra in Les Troyens.

This force of nature made a rare appearance in at Carnegie Hall this week.  She was presented by New York City Opera.  Her arrival signals the commitment of General Director, Michael Capasso, to the very best in music.

Antonacci chose a rich program, filled with the perfume of French music. Having worked often with Riccardo Muti, you can detect a starting point in the word.  Both artists are among the supreme musicians.  Yet both have found that in the beginning there was the word.

Francis Poulenc’s song cycle on painters’ work perfectly illustrates the Antonacci style. The poet Paul Éluard knew Picasso well. His interest in art extended to Marc Chagall, Georges Braque, Juan Gris, Paul Klee, Juan Miro and Jacques Villon.   He wrote poems about each of these artists. Poulenc wrote of things that sang to him. Painters did.

Antonacci approaches these songs like a singer painting. Her voices brushes across a vocal color palette.  It imagines 'the dawn behind a painting.' Themes overlap from one poem to the next — just as the musical modulations in Poulenc’s songs seem to overlap and repeat throughout the composition.

A Poulenc verse on Chagall reads: "Donkey or cow rooster or horse, Even the skin of a violin, A singing man a single bird An agile dancer with his wife.”

The imagery evoked leads us not only to Chagall’s painting ‘Les Mariés de la Tour Eiffel’, but to many of Chagall’s other works in which similar images reappear. For Chagall, as in Poulenc’s compositions, musical imagery imitates the spatial breakdown of the pictorial elements, as if in a disjointed dance. Chagall brings various pictorial elements together on one canvas, which then re-appear in another painting, to go beyond the space of one pictorial frame, just as Poulenc’s musical structures are stated and repeated in overlapping circles.

Again, Poulenc’s composition closely follows the lyrical and rhythmic flow of the text, a supreme expression of the French language. Each word expressed in the music is unique, takes on weight, color and significance, and is enhanced in a musically structured phrase — which underscores Poulenc as the most literary of avant-garde composers and Antonacci among the most literary of singers.

Antonacci not only helps us understand the words in music, but she brings them to life.   Her voice takes on just the right color for a singing man, a single bird. Her body can sway and writhe, or she can stand absolutely still when it suits. Her hands and arms are expressive. Often they are held out in offering as her voice is offered too.

Her diction in wonderful. She sang in French, Italian and English. No need for straining to understand. The meaning is clear as a bell.

The chanteuse in Antonacci is amply on display. The Debussy songs trill and bubble as they emerge. Love is often the subject.

Nadia Boulanger’s setting of Albert Vicor Semain and Paul Verlaine are delivered for the subtly of meaning. “She sold my heart for a song” comes from the depths of the voice and soul.

Absolutely charming is the tale of Monte Carlo by Poulenc and written by Jean Cocteau.  We might imagine the woman jumping into the sea as she cries out that name, Monte Carlo, sacred to all gamblers, one last time—the final staccato in the piano signifying a small inconsequential splash.  Humor abounds.

Antonacci is in true partnership with her pianist, Donald Sulzen.  They end each song at the same time. Often the singer’s last note has been sung moments before the pianist’s. Yet she is right there with him until the last overtone evaporates into the Carnegie Hall air.

This appearance arranged by the new New York City Opera suggests that we may have many more visits in the near future.  Her whispered yet sultry delivery of 'Habenera' from Carmen, may have been her promise.