Buchel and a Peck 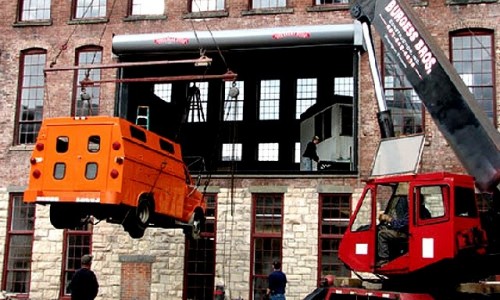 Like this truck being loaded into Building Five the Buchel project had Mass MoCa suspended in mid air. 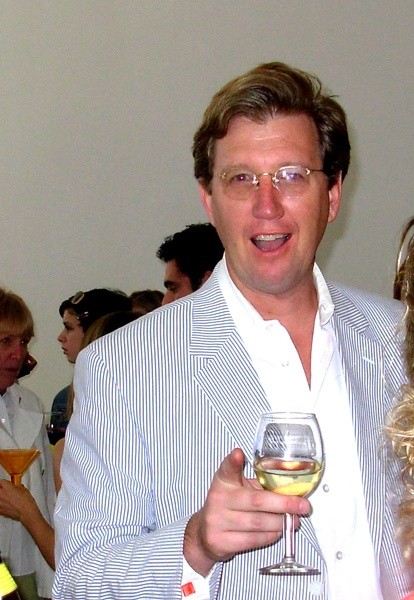 Thompson during the Spencer Finch opening in the summer of 2007 during the Buchel incident. 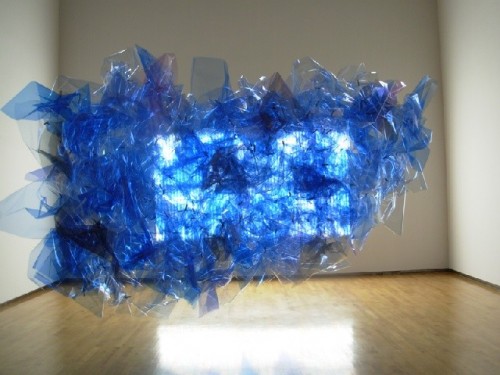 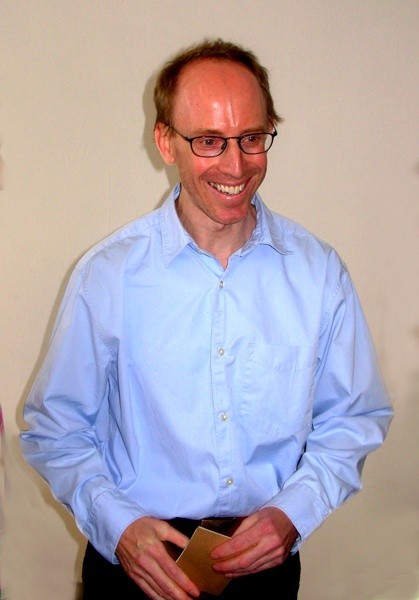 The artist Spencer Finch was the main attraction while a third of Mass MoCA remained closed. 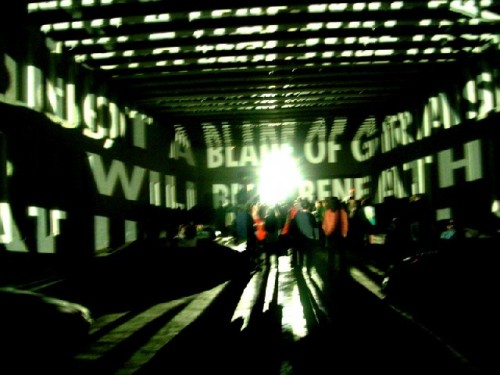 When the Buchel installation was aborted Jenny Holzer was the next artist to show work in Building Five. 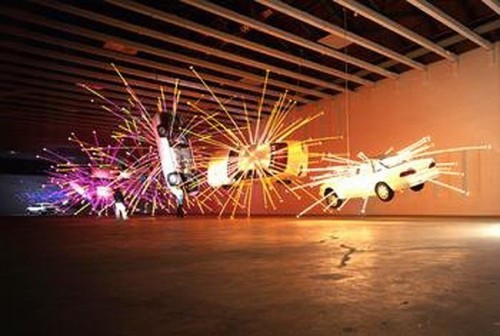 There have been spectacular installations in Building Five like the work of the then unknown Cai Guo-Qiang. 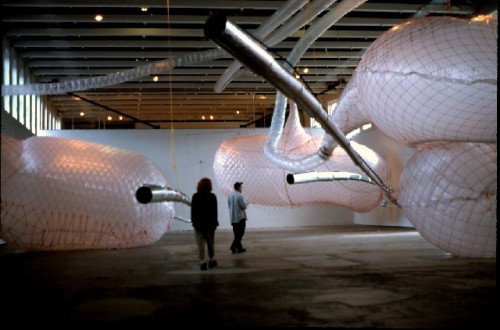 A memorable installation by Timothy Hawksworth. 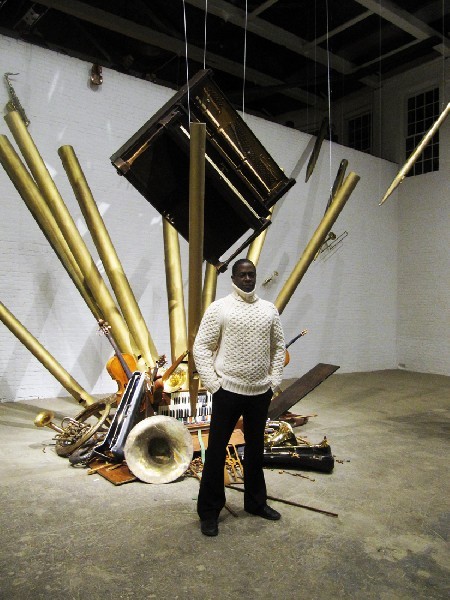 Charles Giuliano There are two elements involved in this discussion. On the one hand we are tracking the institutional development over the past 25 years. That is the archival and historical thread. The other aspect entails my function as a critic and covering the ongoing program as it evolves.

There is the daunting challenge of dealing with contemporary work. As first responders, so to speak, it is particularly difficult to get it right the first time. There is that extra degree of difficulty which was the case when I recently wrote about the Sanford Biggers installation in Building Five.

With some dismay I wrote “There is the familiar response evoked by so many Mass MoCA projects ‘What the fuck is this?’ ”

As is so often the case there was a struggle, which I articulated in the review, of coming to terms with new work and complex ideas. I am trying to comprehend what the artist means by Afro Futurism. Where does that come from? I actually went home and have been listening to my Sun Ra and late Coltrane albums which he talked about.

Joe Thompson Actually I thought your interview with him was great. Particularly when you drew out a shared love of music. Clearly you guys could have talked for an hour and further explored the connections with jazz music. He’s a great player and pianist.

CG I would love to hear him.

JT That piece is all about music and I think you got to that. It was very nice writing.

CG It brings up the issue of risk taking. Mass MoCA is anything but a safe institution. Considering the space of Building Five you’ve had some high profile artists in there. Ann Hamilton, Inigo Manglano Ovalle, and Jenny Holzer, Rauschenberg comes to mind. But you also have shown artists whom at the time few were familiar with.

JT Cai Guo-Qiang now is famous but at the time he was somebody that nobody had heard of. Carsten Holler who is now dragging them in by the tens of thousands at the New Museum was a relatively unknown entity in the United States when we did that show.

CG  How does the process work when selecting exhibitions for that vast space? Do curators come to you and say this is an artist and work that I believe in? When the artist is relatively unknown you have to make an administrative decision. That’s your largest gallery and main attraction. You have to sell tickets. So how does that factor into the decision?

JT I don’t give that a second thought. The best installations in that space work at three distinct levels. There is a theatricality. Your first view into the space is a long view down from the pyramid steps.

JT Artists do best who come to grips with that first image. And treat it in a way that is theatrical and uses the grandness of the space. Those are the artists who I feel have made the most important work there.

Secondly. They have to deal with that peripatetic walking through the space. Where you immerse yourself in it and suddenly you are face to face with detail. You’re right up next to the work itself.

Third. It has this very interesting narrative psychology where from the balcony you look at it from above and down the length of the space. Then you go back and retrace your steps having seen it from above. As you walk back through it there is a reversal as it rewinds in your mind.

Artists that have that sense of theatrical staging. That are able to do the money shot. The peripatetic walking through that takes time. Then the recasting from above and replaying it in your mind.

CG What does it take to convince you and who does the selling?

JT The curators. We have conversations about it. Curators float ideas. Often they have two or three artists they are working with at any one time. There are schedules. Technical issues. Budgets. All of those issues. Those elements have to come together. At any given time there are two or three ideas floating and then we have to commit. Two years, two and a half years in advance we begin to hone it down. Slot them in. I am less involved in individual decisions when the curators are working on a group show. To use your language they shop the idea but with respect to the individual selections I have virtually nothing to do with that. We do talk when we are discussing a kind of mid career retrospective like Nari Ward’s. Or the Matthew Ritchie or Spencer Finch exhibitions in which we devote a significant amount of space to a generally mid career artist. We generally talk about that quite a bit.

CG Can we talk about that?

JT You know I think that I have nothing to say. I have said everything that I would ever have to need to say about that.

CG Ok. Let’s try one more question. What did you learn?

JT Well... (pause) I think... (longer pause) I think you learn a lot. You learn a lot about people. (pause) In that case, this was completely mine in the making, I believed that, and continue to believe that that work (pause) was well on the way to becoming one of the most interesting works of art that we have ever shown. I allowed myself to be…

CG So you believed in the project.

JT Why would I not? How would you ever say that we didn’t believe in it given what we did?

CG We’re having a conversation. I can’t think what's in your mind and heart. Just asking.

JT If you think about what we did. We started with a certain amount of time and a certain amount of budget and I (emphasis on I) allowed both of those things to expand. Radically. (gasp/laugh) By adding bits or doing more. In my view. I don’t know if Mr. Buchel would share this, but in my view, this institution extended itself to a very great extent. Bit by bit. To try to let him achieve his goals. And I was personally, obviously, very moved by the work itself or I never would have taken those incremental, ok, let's take a bunch of, let’s get a bigger house, ok let’s add X more feet to the wall, ok let’s add this, because I believed we were involved in an important project. It was worth extending.

CG It comes to the point where you as an institution are creating works that have never been seen. That are new. There are parameters which cannot be predicted. It speaks well for you and the institution.

JT In that instance we had obviously taken full measure of it. Knowing that from an administrative point of view there are better ways to let a project grow. On the other hand you want to guard against only doing projects that are fully known in advance.

CG In other words you don’t want to lawyer up on this.

JT You want to be precise obviously. But talk to Sanford. Or Ann Hamilton. Her piece started out here as a series of curtained apertures. You could maybe find a deep philosophical connection with the piece she ended up with. But very little visual connection because it went through two or three evolutions.

CG One of which was Richard Criddle taking apart her paper dropping machine and figuring out how to make more and cheaper devices.

JT Actually it was Bill Greenwald.

CG There’s a kind of facilitating that goes on here.

JT Yeah. If that’s the effect you want to achieve here’s two or three ways to do it.

CG Just bringing up Buchel I can feel your body language and response. You have pulled back. You become guarded. You become defensive. You become less charming and engaged. It’s like looking at Saint Sebastian. You are pierced by so many arrows that where could one begin. Even at this point in time it is devastating to talk about.

JT It’s incredibly painful. It was right at the heart of everything we work hardest to achieve here. It was making a new work. Fabricating it here. Timely. At a scale that simply couldn’t be done at any other place. Through an ad hoc truly sculptural process. It hurts when something doesn’t go right at the very center of what you think you do best. It’s very painful. (slow and subdued tone)

CG It divided the arts community. There were those who supported the artist, including the New York Times, and those who took the side of the institution. It was the time when anyone who had anything against you took out their knife. It put the institution in the cross hairs. But you also took one for the team in terms of the field.

There is no museum director or curator who did not follow this case very closely. The incident had an enormous impact on the field and its practice. It was a landmark case. Precedents and policies coming out of it were inevitable. I don’t think any museum director is going to come to an agreement with an artist written on a paper napkin at this point.

JT I wouldn’t like to think that’s the outcome of this. Making and showing art, is, is, human trust, is at the very core of it.

CG How crucial was Jenny Holzer's stepping up and saying I’ll do the next show? An artist of her stature in the midst of that controversy to come forward and endorse the museum.

CG It put the institution back on track.

JT Absolutely. We were deeply appreciative. She is somebody we had been talking with for a long time about doing an installation. So that part wasn’t new. The fact that she came forward and was willing to expedite the installation and get art back in that gallery in a quick, effective and incredibly beautiful manner. Well, it’s hard to overstate the importance of that.