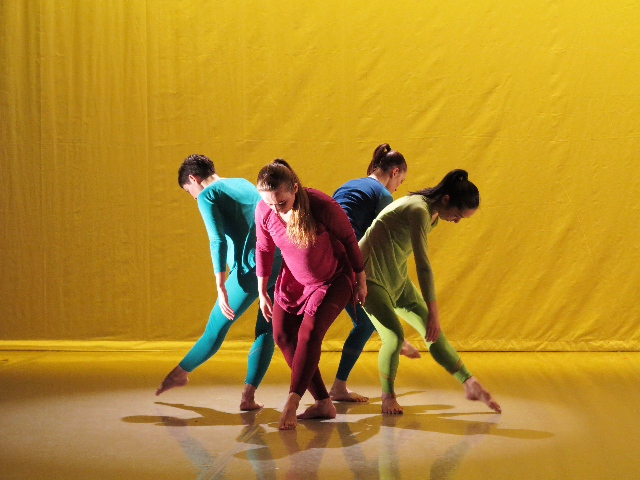 Choreographer Susan Vencl started life as a dedicated student of philosophy who focused on the works of Plato and Kant, but her academic career came to an abrupt halt when she suffered a long, crippling bout of depression. That depression only dissipated when Vencl discovered dance at the age of 37!

Shifting her focus, Vencl ultimately received her MFA in theater and dance from Case Western Reserve at the age of 44, but she did not actually start choreographing until even later in life, after several years of living and working in New York City (when, as she says, she was “almost old enough to collect social security!”). But there is no hint of age in her work, which has energy, creativity and lovely, unexpected moments that made for a very pleasant evening at the Graham Center in NYC.

Long Before Afterward -- which consists of four distinct parts: “Falling,” “Long Before,” “Now,” and “Afterward” -- is Vencl’s philosophical look at the passage of time and the relationship between past, present and future. It is a subject clearly near and dear to this choreographer’s heart. Throughout the 50-minute performance, the five young dancers who brought Vencl’s vision to life wore simple leotards with a classical over-drape (each in a different color of the rainbow), and the stage was bare -- so the audience focus was purely on the music and dance.

I found the first part, “Falling,”  actually to be the most provocative. As the five dancers swayed together, circled, wove and stomped to the music, one of them would suddenly fall to the floor with a loud thud, the others continuing to dance as if nothing had occurred. I don’t know if this was, in fact, Vencl’s intention. To me this provoked thoughts about the randomness of life and the unpredictable twists and turns all our lives take – and how the world around us continues on, no matter what!

The following three parts, while interesting to watch, were less satisfying. The dancers were clearly talented and dedicated, and Vencl’s clever and creative choreography brings them together and apart in often unexpected and fascinating ways -- including a moment, late in the piece, when four of the dancers are literally wrapped up in each other while continually moving. But I found the ideas of past vs. now vs. future elusive – the three parts were just not different enough to convey significant distinction. And, regrettably, that meant that the performance also ended on a somewhat disappointing note: The other members of the audience and I all seemed unsure that the dance was over, which, to my mind, was not a good thing.

On the other hand, one of the best things about Long Before Afterward is composer Arlene Sierra’s fabulous music. Her creative, energetic, expressionist work takes unexpected twists and turns that clearly inspired both Vencl and her dancers. As an extra bonus, before those dancers even took the stage, the audience was treated to a terrific 12-minute Sierra piece, “Avian Mirrors,” superbly performed by violinist Jesse Mills and cellist Raman Ramakrishnan. It nicely set the stage for the music and dance performance that followed.

Long Before Afterward was at the Graham Center of Contemporary Dance February 19, 20 and 21 in NYC, with simple but effective lighting and costume design by Cecilia Durbin (lighting) and Sarah Thea (costumes). For more information about Vencl Dance go to: www.vencldance.org