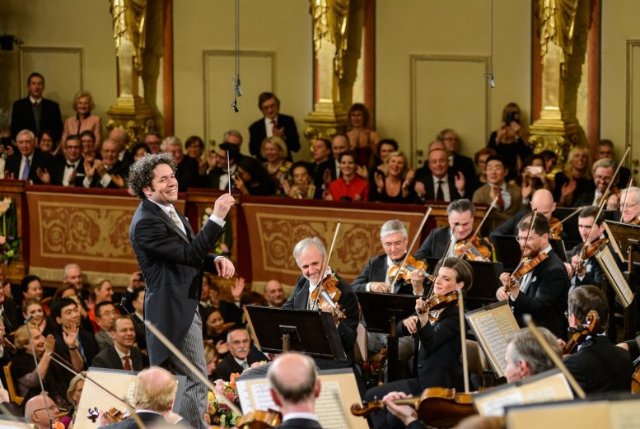 Dudamel Conducts the Vienna Philharmonic
Last night, sitting in a coffeehouse on West 57th St., I noticed something odd about the lyrics of a song playing in the store. I turned to the gent at the next table and apropos of nothing, voiced my finding. That gent sniffed and said "Oh. That's some sort of jazz thing. I listen to classical music."

I thought, "Oh. He must be going to see the Vienna Philharmonic."

Europe's most conservative orchestra returned to the stage of Carnegie Hall last night, offering a program of three works by Johannes Brahms, the German composer who, in 1876 was hailed as the hero of the anti-Wagnerites in Vienna. Here, the program was conducted by Gustavo Dudamel, the world-famous Venezuelan maestro who was birthed from that country's music education system and quickly promoted as the Next Big Thing in a long line of conductors.  Dudamel has led the Viennese on this stage, in a performance at Carnegie Hall in 2010.

Brahms spent much of his early career laboring under the weight of being declared the musical successor to Ludwig van Beethoven. That's probably how he developed his inveterate and irreverent sense of humor. For evidence, look no further than the Academic Festival Overture, the work that opened this concert. One of two orchestral works composed at the request of the Unversity of Breslau after that school granted him an honorary Ph.D. in 1880, the work takes the p, the i and the s out of pomposity by cheerfully quoting a series of drinking songs that were popular with the students at the time.

Happily for the Carnegie Hall audience, the Viennese players are masters of this music. The orchestra's horns and low brass displayed their customary control in the opening phrases before the strings took the lyric theme. They were answered by the horns, which, true to their conservative manifesto, still play the narrow-bore instruments in F with the antique pumpenvalve system, invented (like the Vienna Philharmonic itself) in the 1840s.  Dudamel led the piece dutifully, knowing full well that the Vienna players are the masters of this music.

That laissez-faire approach continued in the second piece of the evening: the cheerful Haydn Variations (which are based on a woodwind tune that may or may not be by Haydn himself.) Here, the Vienna oboes and clarinets took the lead in the opening statement, with the unique, pinched sound of the Vienna oboes to the fore. (Like the horns, their players use an antiquated design for a unique sound.) The theme moved through Brahms' eight masterful alterations before coming to a stately reprise. However, there was little sense of connection between orchestra and players.

A resolution to that potential conflict was needed though for the second half of the program: the First Symphony by Brahms. This work was the result of a torturous creative process, in which the composer, weighted down by the constant comparisons to Beethoven, sent idea after idea to the fire, and pruned, tweaked and revised the work until he was satisfied. The results were worth it. This is a piece that looks forward and back, alluding to the masters before but showing that the composer was indeed his own man with his own, bold artistic vision.

The first movement was bold and taken slightly fast, as Dudamel moved the troops along through the slow introduction. When the main theme (actually themes as the ambitious Brahms liked to build his structures two stories at a time) launched, the orchestra launched with it, at last giving the listener the satisfaction of that rich and closely guarded Vienna sound. Only in the last movement, with its winking allusions to Beethoven's Ninth did the attention wander, although the final coda came to a strong and emphatic close.

In the Viennese tradition of dessert and coffee, Dudamel obliged the adoring audience with two encores. The first was a sweet and slow confection. The second was that orchestra's other specialty: a Johann Strauss polka delivered at a gallop with the constant ringing of sleigh-bell, it causing some listeners to wonder if they had made sure to silence their telephones. One wonders if the gentleman at the start of this article would find this to be "classical" enough.  (Reprinted with permission of Superconductor).